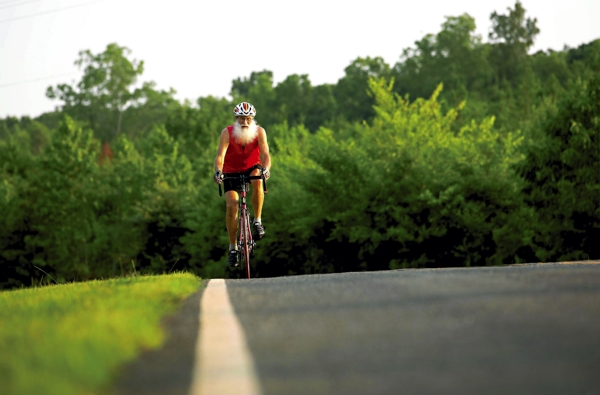 Bicyclist Terry Taylor, 77 years old, will be the subject of a 2016 documentary called A Life on Two Wheels about his attempt to ride his bike cross country from Oregon to Virginia, retracing the route he took for the Bikecentenial in 1976, 40 years later.Photographed near Salisbury, NC on July 25th 2015Photos by Peter Taylor

To commemorate our nation’s 200th birthday in 1976, Terry Taylor and 4,100 other bicyclists rode the Bikecentennial Trail, a 4,250-mile route stretching from Oregon to Virginia.

Forty years ago, Taylor, an avid cyclist since age 7, was living in Fresno, Calif. Half the cyclists left from the West Coast, the other half from the East Coast. They planned to meet in Kansas, smack dab in the middle, or thereabouts.

Remember, this was in the day before cellphones. The cyclists communicated by posting notes along the route on actual bulletin boards — not the electronic kind.

“I didn’t make a phone call for three months,” says Taylor, grinning from behind a long, snowy white beard.

Everyone in his group of 15 riders instantly liked each other, he says.

Taylor traveled with his second wife, but unfortunately, they split when the ride ended. That was OK with Taylor, though, because it had been a wonderful experience.

The group spent the night at schools along the way. There was no hot water, however, as it had been cut off over the summer.

Taylor’s group, which left on June 7, 1976, from the West Coast, eventually met up with its counterpart group which had departed the East Coast on the same day.

They got together at a park in Kansas. It was in a small town, and Taylor doesn’t remember the name.

One of the women had brought along a box of cake mix, and the group knocked on doors until one of the residents let them come in and bake their celebratory cake.

“People put out cookies along the route,” Taylor says. “They left journals for us to sign. People met and got married on that trip. One of the gals played piano for a Sunday church service in one town we went through. I have lots of stories from that trip.”

Taylor hopes to have many more stories to share at the end of his second trip.

He’s already shipped his Surly Long Haul Trucker road bike out to Oregon. He won’t have thousands of other riders with him. Instead, Brent Carter, an 18-year-old from Huntsville, Ala., and the son of good friends, will be riding along with him.

“He’s young,” Taylor says. “I’ll send him out ahead of me and tell him to go have fun.”

They’ll both have cellphones, so they can meet at the end of every day. A far cry from bulletin boards, to be sure.

The Bikecentennial Trail is now known as the TransAmerica Trail. It follows a path through Oregon, Idaho, Montana, Wyoming, Colorado, Kansas, Illinois, Kentucky and ends up in Virginia.

As he did 40 years ago, Taylor’s brother, Jim, who also lives in Salisbury, will be there to pick him up at the end of the ride.

Taylor says he wants to retrace his route for no other reason that just to see if he still can.

“I’m addicted to bicycling,” he admits. “I get the biggest high out of a bike ride. I feel like I’m on top of the world.”

Taylor spent Sunday afternoons riding with his children when they were young. His oldest son rode beside him on a 20-inch bike, his younger son sat in front of him and his daughter sat behind him. He’d tie a rope around her and secure it around his waist so she wouldn’t fall off when she fell asleep. On hills, he’d reach down and push his son along.

His children grown, he now has 13 grandchildren, 12 boys and a girl.

“Somebody better be having girls out there,” he quips.

He tries to ride at least three days a week, typically about 300 miles a month. He plans to cover 50 to 60 miles a day on the ride. Friends with the Central Carolina Cycling Club will receive a group email he hopes to file daily, and they’ll also be able to track his progress with the app Strava.

He’ll use the Warm Showers app to find —you guessed it — warm showers along the way. He and Brent will stay at campgrounds to keep expenses to a minimum.

Taylor has received his maps from Adventure Cycling, which is planning a big celebration of the Bikecentennial anniversary in mid-July in Missoula, Montana. He plans to be there for it.

He thinks the trip will take about 70 to 80 days, putting him back home sometime in August.

“You have a plan,” he points out, “but you have to be able to improvise. I like that unknown and having to adapt.”

It hasn’t stopped him.

“You have to be willing to hurt to get back on the bike,” he says.

When he gets home, he says, he won’t rest long on his laurels.

He definitely wants to do something big for his 80th birthday, he says.