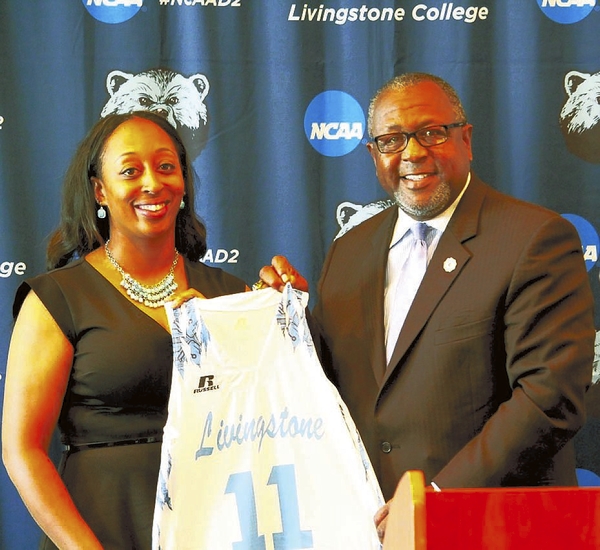 Livingstone Athletic Director Andre Springs made the announcement during a press conference on campus, one week after former coach Anita Howard announced her resignation in order to take the same position at Columbus State in Georgia.

“I appreciate you for entrusting me with the responsibility of fostering this program of young women, as athletes and more important as young women,” Silver said. “A great foundation has been laid here by my predecessors, and my mission is to take their successes to the next level.”

Springs said that it was important to fill the position quickly, but also with the right person.

“As AD, you have to look at the benefit of the student athletes to get them a leader as soon as possible,” said Springs, a recent CIAA Hall of Fame inductee. “When I met her, I felt her energy and knew that we were going in the right direction. I believe that she’s a winner and has the passion we were looking for.”

Silver promises “94 feet of heat … my style of play mimics my personality, very passionate and very energetic, up and down the floor.

“I’m excited about the team that’s returning here,” continued Silver. “I’m ready to view some video from last season to see how we can improve but I do know that the team is equipped already to play the style I want to put forward. It should be a very productive transition.”

Silver comes to Livingstone after four seasons at Wilmington University, which competes in the Central Atlantic Collegiate Conference. Silver’s overall record at Wilmington was 32-76, but to her credit, the team had won only two games in consecutive seasons before she became the head coach.

Before assuming the head job at Wilmington, Silver worked as an assistant coach at NCAA Division III Johns Hopkins University, where she helped the Blue Jays to a stellar 24-5 record and a berth in the second round of the NCAA Tournament.

At Hopkins, Silver focused on developing the guards and post players.

From 2005 to 2011, Silver was the head coach at Western High School in her native Baltimore, where she helped lead the Doves to 20 or more wins in all six of her seasons, compiling a 126-30 overall record.

In 2009, Silver was selected as the head coach for the premiere game of the McDonald’s Roundball Classic All-Star Game, which featured the top talent from Maryland, Virginia, D.C., Delaware and Pennsylvania.

Particularly important to Livingstone, Silver boasted perfect graduation and college-acceptance rates during her time at Western. She also coached at other Maryland high schools, including Towson Catholic High School.

Silver is a graduate of the University of Maryland-Baltimore County, where she earned a bachelor’s degree in sociology and also played on the women’s basketball squad.

Silver has a 4-year-old daughter, Doriyan, who, according to the coach, “doesn’t miss a game.”

The new coach also says that her mother, Bertina Silver, has always been her inspiration. “She always been there for me, whether I was playing or coaching — almost every road trip, in the stands, home or away, she’s been very supportive.”

Silver said that another attraction of her new job is Livingstone’s conference.

“The CIAA is absolutely the best D2 conference in the country, I believe,” said Silver. “One of my goals at Wilmington was to play CIAA schools every year. It’s an honor to be in this conference, which speaks volumes across the nation … I’m looking forward to it.”