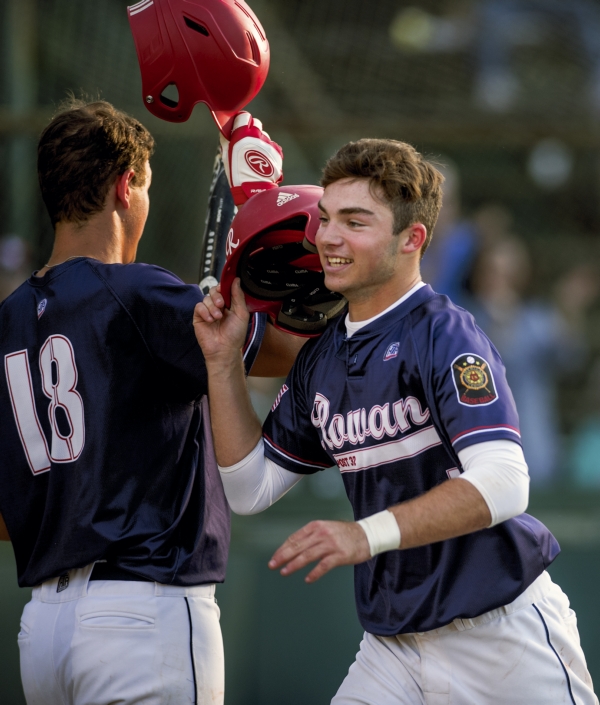 SALISBURY — Strange as it sounds, the best moment of Rowan County’s 21-3 American Legion baseball romp against Eastern Randolph on Thursday came on defense.
That was Lee Poteat’s diving catch in right field that ended the fourth inning and saved two runs. The ball was sinking and slicing away from Poteat toward the line, but he got a great jump and chased the ball down.
“Poteat ended up on his belly because he had to keep running as hard he could just to get there,” Rowan coach Jim Gantt said. “It was almost like he was sprinting and diving at the same time. You just don’t see many plays like that.”
Belmont Abbey-bound lefty Brandon White (3-0) had some 30-minute waits between innings, but he hurled five strong frames at Newman Park to earn the victory. White struck out four, allowed one run, and probably will buy Poteat a graduation present — maybe two.
“Lee was the first person I met when we were coming off the field,” White said. “What a great play. It saved my night.”
Rowan (9-3) won its sixth straight game, batted around three times and scored in every inning. There was a five-run second, a six-run fourth and, just for fun, Rowan tacked on a five-run sixth.
Backup infielder Tanner File, who entered the game in the fifth inning, had two doubles and three RBIs in his two trips to the plate. It was that kind of night.
“When you get 20 hits, it means a lot of people had great games,” Poteat said. “I think we were a little upset. A lot of us didn’t hit very well in Wednesday’s game (a 5-4 win against Mooresville).”
Brandon Walton went 4-for-5 with three doubles and four RBIs and may have drilled his single — a rocket to right field — harder than any of the doubles. Dalton Lankford had three hits, scored three runs and drove in two. Poteat was on base six straight times with three hits and three walks, scored three runs and knocked in three. Brett Graham had two doubles and scored three runs. Chandler Blackwelder stayed hot with three RBIs and three hits and walloped his team-leading third homer of the summer to lead off the bottom of the first.
“Their starting pitcher (J.T. Moore) has been good,” Gantt said. “But when the first batter hits one out, maybe that puts some doubt in your mind. Then late in the game, we were getting hits off guys that we should hit, but we still had good at-bats. Guys were being patient and getting good pitches to hit.”
The lone run White allowed came on a solo homer by Post 81’s No. 3 hitter Easton Jones in the fourth.
“That was a change-up that I left up and inside to a good hitter,” White said. “But the way we had the bats rolling tonight, it didn’t hurt. We jumped on ’em pretty good.”
Nine different Rowan players drove in at least one run, and that was with cleanup man Juan Garcia still sitting out with a back issue that appears to be only a minor setback.
“We kept pushing ourselves, kept doing our jobs,” Walton said. “And the momentum stayed with us.”
John Owen pitched the sixth and allowed two runs, one earned. Then Owen enjoyed a brisk seventh to end the game via the mercy rule.
Eastern Randolph fell to 3-9.
Gantt said everyone can use a rest, and Rowan will be off tonight and Saturday. Rowan will play High Point at Finch Field at 6 p.m. on Sunday.
***
NOTES: Rowan pounded 10 doubles… Walton raised his batting average to .426. … Seth Cauble and Caleb Link combined to go 2-for-2 with three walks and five runs scored in the No. 9 spot in the batting order… Hunter Shepherd picked up his team-leading 19th RBI on a sac fly. Walton has 18 RBIs, while Poteat has 16. … White has allowed two earned runs in 15 innings. … Gantt will serve as grand marshal of the Faith Fourth of July celebration.