Accidents you never forget: Parents who’ve been there make their case for lawn mower safety 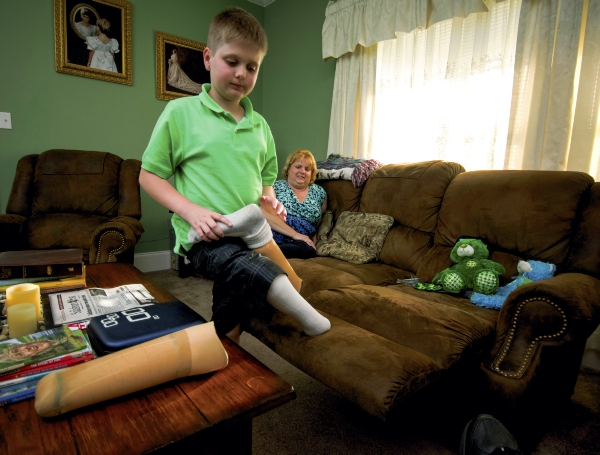 JON C. LAKEY / SALISBURY POST John Robbins explains the few parts of his prosthesis as his mother Melissa (back) listens. John was 3-years-old when his father accidentally backed over his leg with a riding lawn mower at their home in western Rowan County. The year was 2008. Now John is 11-years-old and he and his family are advocates for mower safety and recently were featured in a nationwide public service announcement to raise awareness for mower safety especially mowing around children. Wednesday, June 8, 2016, in Salisbury, N.C.

WOODLEAF — John Robbins does things you might expect of any 11-year-old. He bounces on the backyard trampoline, attends Scout meetings, plays video games, swims at the community pool and helps his grandfather in the garden when called upon.

He’s constantly on the move, so most people don’t realize he’s missing his right foot, lost in a lawn mower accident eight years ago.

But that day, May 9, 2008, is something his parents, Melissa and Gregg Robbins, will never forget, and in the years since the accident, they have tried to provide shoulders to lean on and cry on for other parents caught in the same kinds of life-altering events involving lawn mowers.

Their trips of consolation, advice and encouragement have taken them into Virginia and throughout Piedmont North Carolina.

Last summer, they also joined 12 other families from 10 different states in Orlando, Fla., where they filmed a public service announcement as part of the parents-driven “Limbs Matter” project.

All the parents involved have children who have undergone amputations due to lawn mower accidents.

“Our only goal is to spread the word about lawn mower safety,” Melissa says.

The Limbs Matter PSA has been endorsed by the Amputee Coalition, and the bottom-line message of the organization and the video is simple: Keep children inside while someone is mowing.

While that may sound as though it’s going a bit overboard, especially when you want children to enjoy the outdoors as much as possible, consider the statistics, which are sobering.

The U.S. Consumer Product Safety Commission says 800 children are run over by riding lawn mowers or small tractors each year, and some 600 of those accidents result in amputations. In addition, 75 people are killed and 20,000 injured overall in mower-related accidents annually, and one in five deaths involves a child.

For children under 10, major limb loss is most commonly caused by lawn mowers.

“Depending on where you live in the United States,” says Susan Stout, president and chief executive officer of the Amputee Coalition, “you may mow your lawn 30 times or more this year.

“Every time you start your mower, you are dealing with a dangerous and potentially deadly piece of equipment.”

In Orlando, the parents joined Brett and Jodi Bainter, whose 15-year-old son, Jake, had lost his right leg in a mower accident now 12 years earlier.

Brett Bainter was operating the lawn mower that day, and the stories of the parents who gathered in Orlando are quite similar and equally as emotional.

The mower operator was backing up and didn’t know his or her child was behind the mower. Their child came from out of nowhere into the mower’s path. A child was riding along and fell off.

It all happens so quickly.

Parents are forever haunted by the accidents, playing those moments before, during and after the accident over and over in their minds. People such as the Robbinses and Bainters have opted to channel those emotions toward helping others.

Jodi Bainter wrote a book, “Make It Morning,” about her family’s experience, and she also organized last summer’s gathering at her home to film the PSA.

“We each had our stories,” Melissa Robbins says. “We built lasting bonds. We shared information and experiences without judgment.”

The Robbinses and other “Limbs Matter” parents are trying to distribute the PSA wherever they can, hoping it eventually goes nationwide. You can view it at www.limbsmatter.com and also on the Limbs Matter Facebook page.

The page allows parents to ask questions, talk, network and share their feelings “and not feel like we’re going to be judged,” she adds.

“No one wanted to hurt their child,” Melissa says. “These were just accidents.”

It’s a blessing, but John Robbins doesn’t remember the mower accident in the front lawn of his house off Messick Road. He was 3. Gregg Robbins had placed him in his outside sandbox, where John liked to play with a dump truck, buckets and shovels.

While John was occupied in the sandbox, Gregg began mowing. About two-thirds of the way down the yard toward the road, Gregg backed up the mower in trying to get around an apple tree. He heard a thud and the mower shut down.

Gregg turned around and John was on the ground, his right leg under the mower.

Gregg wrapped up his son, whose leg was bleeding profusely, and ran a short distance down the road to the home of Carl and Linda Messick, who called 911, wrapped John in towels and applied as much pressure to the wounds as possible.

Carl Messick returned to the Robbins’ front yard and was able to find part of John’s right foot near the apple tree. The Messicks placed it on ice, in hopes that maybe it could be reattached later, but that proved to be futile.

Six surgeries would take place before John could come home from the hospital on May 21. A seventh surgery followed on June 2. What remained of his right foot was amputated three days after the accident.

The lawn mower’s blade had cracked his thigh bone, cut and cracked his kneecap and broke his lower right leg near the foot besides severely tearing his foot. A stuffed blue bear, which John still has, helped the 3-year-old get through those days, along with a Thomas the Tank blanket.

John took his first steps — again — June 12, just a month after the accident. By the end of 2008, John was fitted with his first prothesis. Since then, as he has grown, he has averaged getting a new foot about once a year.

John also had one more surgery when he was in the second grade. He still has a green stuffed bear from that occasion.

Having just completed the fifth grade at Woodleaf Elementary, John will be starting West Rowan Middle School in the fall. This past year, he had perfect attendance in school and stellar grades, though he copes with attention deficit disorder.

Because of the fittings and the periodic need for a new artificial foot, John and his family take trips to the Shriner’s Hospital in Greenville, S.C., about twice a year. Gregg and Melissa Robbins have high praise for the Shriners, who pay whatever costs their family insurance doesn’t cover for the prosthesis.

Gregg and Melissa say it has been amazing to them how often lawn mower accidents — the devastating kind that happened to them — aren’t reported on television on in newspapers.

Gregg said he also is struck by how many of the accidents leading to amputations involve children between the ages of 3 and 5.

After the Robbinses’ accident in 2008, a family friend cut down the apple tree in their front yard before John came home from the hospital, knowing Gregg could never bear seeing it.

Melissa works as a finance allocations director for Rowan United Way. Gregg is a licensed electrician employed by the Rowan-Salisbury Schools’ maintenance department.

As you can imagine, the date of May 9 is seared into their memories. The family chooses not to ignore it, but celebrate the day as a second birthday for John, who usually likes to go to Outback and order some cheese fries.

The Robbinses are encouraged by some of the advances in the field of prosthetics and what they could mean for John as he grows older.

“We’re seeing things (develop) by leaps and bounds,” Melissa says, “and anything about amputees — I’m all over it.”