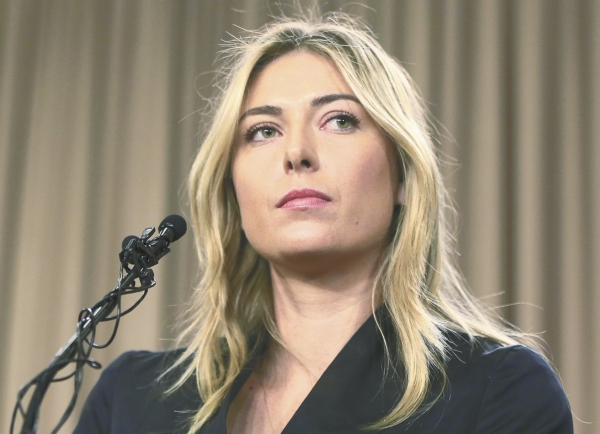 AP Photo/Damian Dovarganes, File... In this file photo from March 7, tennis star Maria Sharapova speaks about her failed drug test at the Australia Open during a news conference in Los Angeles.

PARIS (AP) — Maria Sharapova was suspended Wednesday for two years for failing a drug test, labeled “the sole author of her own misfortune” because she hid regular pre-match use of a newly banned substance from anti-doping authorities and members of her own entourage.

The tennis star said she would appeal what she called “an unfairly harsh” punishment to the Court of Arbitration for Sport.

The ban, handed down by a three-person Tennis Anti-Doping Program tribunal appointed by the International Tennis Federation, is backdated to Jan. 26, when Sharapova last played. She tested positive for meldonium that day after losing to Serena Williams in the Australian Open quarterfinals. The panel said various elements of Sharapova’s case “inevitably lead to the conclusion” that she took the substance “for the purpose of enhancing her performance.”

Sharapova, who faced up to a four-year suspension, loses all ranking points and prize money she earned in Melbourne.

More significantly, if her suspension withstands an appeal and runs through Jan. 25, 2018, the 29-year-old Russian will wind up missing this year’s Rio de Janeiro Olympics and a total of eight Grand Slam tournaments during what might have been prime competitive years.

It certainly throws into doubt the on-court future of a former No. 1-ranked player and owner of five Grand Slam titles who is one of the most well-known and — thanks to a wide array of endorsements — highest-earning athletes in the world.

She is one of 10 women in tennis history with a career Grand Slam — at least one title from each of the sport’s four most important tournaments. Sharapova was the 2004 Wimbledon champion at age 17; No. 1 in the rankings at 18; U.S. Open champion at 19; Australian Open champion at 20. An operation to her right shoulder in 2008 took her off the tour for months, and her ranking dropped outside the top 100. But she worked her way back, and in 2012, won the French Open, then added a second title in Paris two years later.

Now comes a dark chapter to the story of someone who was 9 years old when her father moved her from Russia to Florida to pursue a tennis career.

Sharapova was provisionally suspended in early March; shortly afterward, she announced at a news conference in Los Angeles that she had failed a doping test for meldonium in January. She did not mention, as the panel’s 33-page ruling does, that she also failed an out-of-competition test for the same drug in February.

Sharapova’s defense: She was not aware that the World Anti-Doping Agency barred athletes from using meldonium, also known as mildronate, as of Jan. 1. The panel’s ruling, in a nutshell: She should have been aware — and would have been, had she followed proper protocols.

One bit of good news for Sharapova on Wednesday: Sportswear giant Nike announced it “will continue to partner” with her, adding: “We hope to see Maria back on court.” In March, Nike said it would suspend its business relationship with Sharapova while an investigation was ongoing.

Sharapova said she was first prescribed the Latvian-made drug, typically used for heart conditions, for medical reasons in 2006, part of a Russian doctor’s “medicinal and nutritional regime which at the outset comprised about 18 medications and supplements,” according to the panel’s findings.

In 2012, Sharapova reduced her pill intake, but continued with meldonium, the panel found.

Meldonium — not approved for use in the United States or European Union — increases blood flow, which improves exercise capacity by carrying more oxygen to the muscles.

“The manner of its use, on match days and when undertaking intensive training, is only consistent with an intention to boost her energy levels,” the ruling said. “It may be that she genuinely believed that mildronate had some general beneficial effect on her health but the manner in which the medication was taken, its concealment from the anti-doping authorities, her failure to disclose it even to her own team, and the lack of any medical justification must inevitably lead to the conclusion that she took mildronate for the purpose of enhancing her performance.”

The panel, which held a two-day hearing last month, found that only Sharapova’s manager, Max Eisenbud of IMG, and her father knew she was taking the drug then.

In what Wednesday’s report refers to as “the evident implausibility of his account,” Eisenbud said he would check Sharapova’s list of medications against WADA’s list of prohibited substances during an annual Caribbean vacation after the season ended, but he did not take that same trip in 2015 and, therefore, did not do his usual cross-check.

“The idea that a professional manager, entrusted by IMG with the management of one of its leading global sporting stars, would so casually and ineptly have checked whether his player was complying with the anti-doping (program), a matter critical to the player’s professional career and her commercial success, is unbelievable,” the tribunal wrote.

“She must have known that taking a medication before a match, particularly one not currently prescribed by a doctor, was of considerable significance,” the decision said. “This was a deliberate decision, not a mistake.”

Keeping her use of meldonium secret from her team and anti-doping authorities constituted “a very serious breach of her duty to comply with the rules,” the panel ruled.