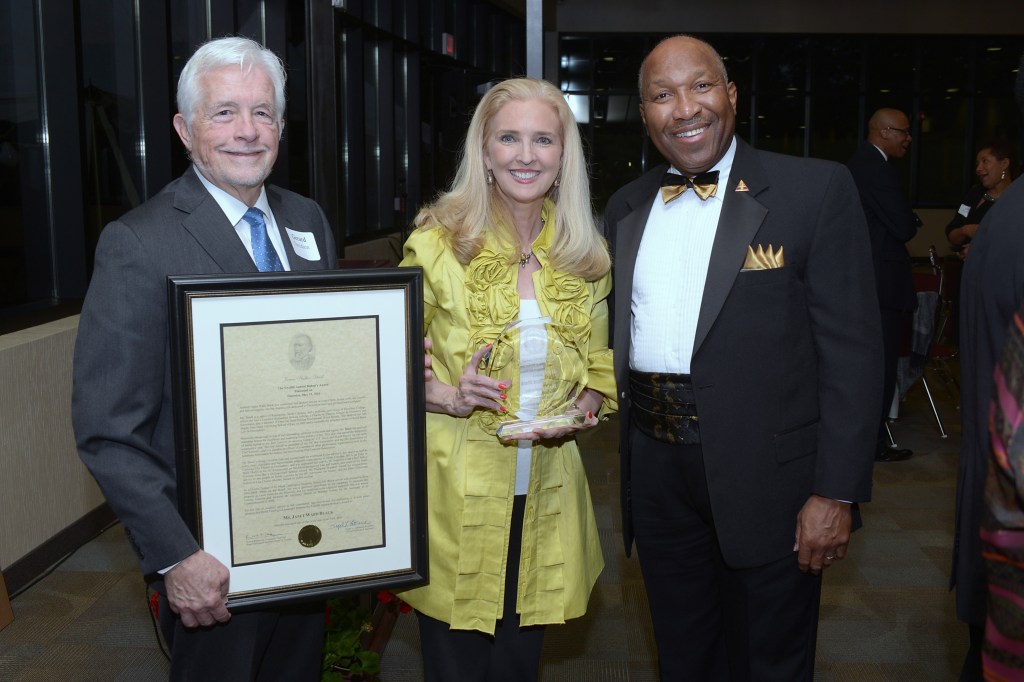 SALISBURY — Attorney Janet Ward Black, of Greensboro, and Dr. Henry A. Moses of Nashville, Tenn., were honored by Hood Theological Seminary at the 12th Bishop James Walker Hood Donor Appreciation Dinner on May 19.

“This event is held to recognize and thank those donors whose support reaffirms Hood’s unique investment in the future of the church and society,” said President Vergel Lattimore. In welcoming the guests, Lattimore said, “Your contributions are like mustard seeds in rich soil. We cherish them and nurture them, and like you, expect good fruit.”

The theme of this year’s event was the “Grace of Generosity.” Rev. Randell A. Cain, Jr., a portfolio manager and principal owner of Herndon Capital Management, and associate pastor of Zion Memorial Baptist Church in Winston-Salem, delivered the keynote address. A 2015 master of divinity graduate, Cain said his journey at Hood “liberated and transformed” him. He emphasized the impact that donors’ gifts have on producing leaders who are transformational, and on supporting the mission of the Seminary.

Dr. Trevor Eppehimer, academic dean, and Dr. Mary Love, acting dean of students, underscored the importance of the support of alumni and friends to the academic programs and community life at Hood. Two Hood students, Rev. Patrick Jones of Chapel Hill, and Rev. Frances Greene of Kannapolis, gave heartfelt testimonials on the significance of the scholarship funds and tuition assistance made possible by the generosity of Hood’s donors.

The highlight of the evening was the presentation of the Bishop James Walker Hood Awards for Distinguished Service. This is the highest honor Hood Seminary bestows on donors, leaders and supporters. Lattimore thanked this year’s recipients for their constant support and generous contributions of time, talent and treasure to the mission of Hood since becoming independent 15 years ago.

Nationally recognized as one of the outstanding attorneys in the state and region, Black has received numerous honors for excellence and leadership in her practice of law. This year, she earned the distinction of being named to the “Best Lawyers in America” listing by U.S. News and World Report for the tenth consecutive year. She has served as president of the N.C. Bar Association and the N.C. Association of Trial Lawyers. Black’s strong Christian faith and commitment are evidenced by her service to her church as well as many civic, charitable and humanitarian nonprofit organizations in North Carolina. She is an elder at Christian City Church in Greensboro, and was appointed last year by N.C. Supreme Court Chief Justice Mark Martin to the N.C. Commission on the Administration of Law and Justice. She received the North Carolina State Bar’s Distinguished Service Award, the Thurgood Marshall Award for extraordinary service to the people of North Carolina by the N.C. Advocates for Justice and the Duke University School of Law Charles Murphy Award for public service.

As a charter trustee of the Hood Theological Seminary board, Black served 2001-2008. While on the board, she was a generous contributor to the campaign to renovate the former Days Inn property as a new home for the seminary, and has continued to be a faithful supporter. She was named trustee emerita and awarded the honorary doctor of humane letters by the seminary at its commencement in 2008.

Moses is a nationally known educator, counselor, and leader who has touched the lives of students, alumni, faculty and staff at a number of institutions throughout his career, including Hood Theological Seminary.

A graduate of Livingstone College with a degree in chemistry, Moses received the M.S. and Ph.D. degrees at Purdue University. In 1964 he began his tenure at Meharry Medical College in Nashville, Tenn., as assistant professor of biochemistry and soon became a full professor. In 1999 he attained the status of professor emeritus. He is also the former director of continuing education and assistant vice president for academic support at Meharry. In 2007, Moses became the executive director of the Meharry National Alumni Association, Inc., a position he currently holds.

Moses’ dedication to Meharry and to his students is legendary; a scholarship and a building on the campus bear his name as testament to this fact. He has served on a number of panels of the National Science Foundation. He has received numerous honors; notably the Presidential Citation as an Outstanding Alumnus from the National Association for Equal Opportunity in Higher Education, and the Purdue University Distinguished Alumnus Award. Meharry Medical College has bestowed many of its highest distinctions on Dr. Moses, including the Kaiser-Permanente Award for Excellence in Teaching.

Moses is the son of Rev. Andrew McLean Spaulding and Dr. Olivia T. Spaulding, both longtime faculty members at Hood Theological Seminary of Livingstone College. Dr. Olivia Spaulding also served as dean of Livingstone College. Through the establishment of Spaulding scholarships at Fisk University, his father’s alma mater, and Hood Theological Seminary, Moses has perpetuated their life-long devotion to education. Last year, he honored his parents by donating their Salisbury home to Hood Seminary. It was dedicated in October 2015 and serves as the presidential home. Due to commitments with alumni activities at Meharry, Moses was unable to be present for the award.