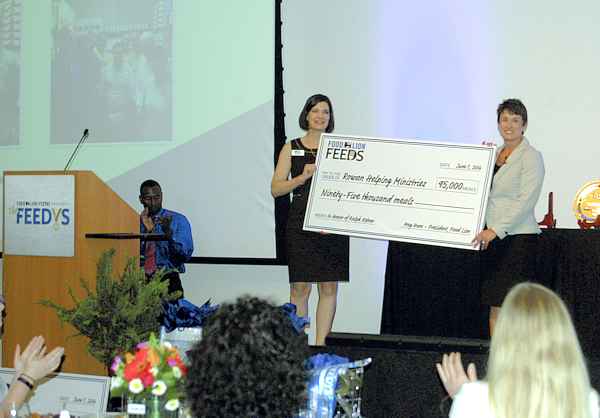 Amanda Raymond/Salisbury Post Rowan Helping Ministries was presented with a special donation of 95,000 meals in honor of the recently deceased Ralph Ketner, co-founder of Food Lion, at The Feedys, Food Lion's first awards ceremony to honor community partners and food banks that are committed to ending hunger.

“We know that Mr. Ketner loved Rowan Helping Ministries,” Meg Ham, president of Food Lion, said. “He cared deeply for the services they provide and the community that it serves.”

Ham said it is good to take the time to reflect on all the hard work community members have done.

“We couldn’t do what we do without them,” she said.

The company has also lowered prices in its stores, company officials say, so that customers do not have to choose between buying groceries or paying rent.

“In addition to the giving, we believe that inside of our stores we’re able to help those (people) not have to make the difficult decisions,” Ham said.

Ham thanked community partners, associates and customers who participate in their efforts to relieve hunger.

“Our customers have donated over 5 million meals in support of Food Lion Feeds,” she said.

Along with honoring Rowan Helping Ministries, Ham also gave a special tribute to Ralph Ketner and gave him a Lion’s Heart Award.

“Mr. Ketner was a humble man who gave a tremendous amount to our community,” Ham said.

Kyna Grubb, executive director of Rowan Helping Ministries, was at the ceremony to accept the donation.

“Rowan Helping Ministries would not be where it is today without Mr. Ketner’s generosity,” she said.

Ketner donated $150,000 to the construction of Rowan Helping Ministries’ first building in 1988. He then raised the remainder of the funds needed for the building in one weekend.

Grubb said Food Lion has been a “wonderful partner” for the organization. Food Lion volunteers help out in Jeannie’s Kitchen, the soup kitchen, every other week. Store managers have helped with renovations in the Ralph W. Ketner Crisis Center, painted, helped stock and organize the food pantry and answered all of Grubb’s grocery questions.

“Food Lion, every day, helps with the work Rowan Helping Ministries does,” she said.

Food Lion plans to continue The Feedys and hold an awards ceremony every year.