Dr. Ada Fisher: Remembering the one & only Ali 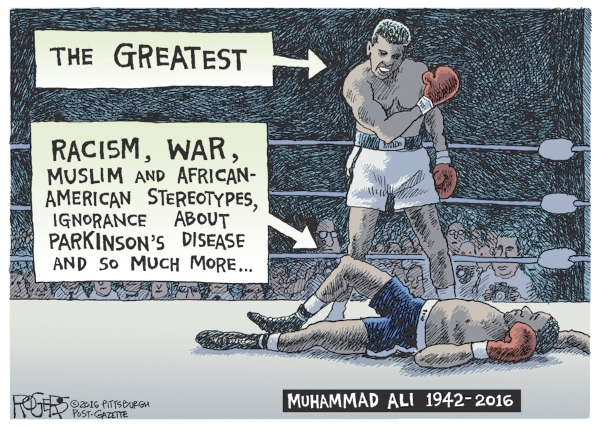 It was a Saturday night and per usual the Gillette Cavalcade of Sports was on, featuring  Floyd Patterson or some other fighters. All had gathered around our small television, not just for the fight but because we had a television.

Not long after that, there came a young man who was boyishly handsome and so brash as to say he was  the greatest boxer of all time, Cassius Clay. When he knocked out Sonny Liston with what some deemed the invisible punch — those of us who believed called it the Miracle Punch — he got the world’s attention. As a boxer whose arms were often down, daring someone to come at him, he stood upright with shorts tight on what was his proper waist. (Let the young take a hint please.) When he hit the streets he was clean as well.

Cassius Clay spoke in lyrical prose, the forerunner of Jesse Jackson’s banter. Future generations would try to imitate it, e.g. JayZ, the Impressions’ “People Get Ready,” Marvin Gaye’s “What’s Going On?” His poetic expressions flowed beautifully without the caustic insults of those who have followed rapping in his stead.

Clay’s conversion to The Nation of Islam scared the hell out of white folks;  many saw it as an attack on them rather than about his view of God or Allah. After his trips to Mecca and throughout the Middle East, people waited for the other shoe to drop.

Under the Fruit of Islam with the Honorable Elijah Muhammed and Malcolm X, the Ali rhetoric was often frightening to establishment blacks and whites. So electrifying was their logic that throngs of young people were recruited to the cause. In U.S. prisons many addicts and those considered the dregs of society turned their lives around and joined the Nation of Islam itself.

The other shoe did drop when Muhammad Ali refused induction into the military on the grounds of being a conscientious objector. He also issued a challenge to America, whose black soldiers had been disproportionately assigned to the front lines, when he noted that “No Viet Cong had called him a n—er,” and that wasn’t his fight. Quakers and others had been given this pass, but not Ali. This move stunned the world and brought him a ban from boxing, a loss of revenue in excess of $10 million  and a legal challenge which he won to prove the Constitutional understanding of freedom of religion.

In Chicago’s Hyde Park, we lived about eight blocks from the homes of Elijah Muhammad, Wallace Muhammad and the complex of the Nation of Islam, less than two blocks from a residence for Muhammad Ali. The reality is Muhammad Ali was a superstar surpassing Beyoncé, Michael Jordan, The Beatles, Prince and Michael Jackson. Black women loved him, for his wives looked like us and were treated respectfully out of the media eye. Leaving nine children and four wives to mourn his loss, how fitting that the passing of Ali is during Ramadan, one of the pillars of the Islamic faith.

Ali was also a pillar, not only of black society but the world. The prevailing anti-Muslim rhetoric obfuscates the principles of a religion, Islam, that western society doesn’t truly understand and too many of its eastern practitioners defile with their misdirected violence and lack of protections for their most vulnerable.

When blacks of all political persuasions speak, few disagree that for us Clay was a champion. Muhammed Ali was like Malcolm X, one of our princes, acknowledged throughout the world as men who stood on principle whether you agreed with them or not.