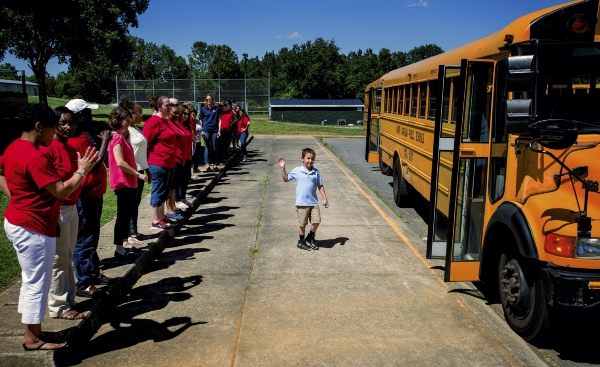 Teachers and staff wave goodbye to Colton Knight, a rising second-grader, as he leaves to get on the bus for summer vacation at Overton Elementary School in Salisbury on Wednesday. Colton kept returning to give more teachers a hug. Allison Lee Isley/Salisbury Post

SALISBURY — At Overton Elementary the loudspeaker crackled. As the last few seconds of the school day ticked by, Principal GeRita Walden took the time to thank Overton’s staff and students for a great school year.

“I hope you all have an incredible summer, and I look forward to seeing you this fall,” she said.

Kindergarteners Iijah’Rae Blackwell and Will Rogers were both looking forward to a summer of fun and sun, but when buses at the Salisbury school pulled out with cheers and hands waving frantically from the windows, it was a bittersweet moment for many.

Sipe and the other fifth-graders won’t be returning to Overton, and say they’ll miss their teachers and the friends they made here. It’s a sadness that stood out, even in the midst of last-day festivities and summer fever.

Tuesday at Hanford-Dole’s field day, thoughts of the next year were something that came immediately to mind.

“I don’t want to leave,” fifth-grader Savannah Sides said. Her class was gathered in the gym, playing a life-sized version of “Hungry Hungry Hippo” with scooters and plastic mesh baskets. Later, they’d move on to tug of war on the soccer field.

Sides and other fifth-grade students across the district have the “middle school jitters.” Not only will they be leaving behind schools and old routines, but they’ll have new classes, new schedules and new people to adjust to.

“I’m excited but I’m scared, because I’m going to middle school and I don’t really know what that’s like,” Sipe said.

Sipe will be transferring to Erwin Middle in the fall, while most of her friends are going to Knox. Sipe started at Overton in September, but for many students, it’s the only school they’ve ever known.

Overton fifth-grader Blake Barrier started at the school in kindergarten and said he’s “passionate” about the school.

“I love that I could see how I could grow through the ages,” he said.

But the last week of school gave him some downtime to say goodbye to his Overton family. The bus line at the end of the day was full of hugs as students ran up to say goodbye to their favorite teachers and calls of, “Have a good summer!”

“I just have to face the fact that I’m leaving and going somewhere new,” Barrier said. “ . . . It’s almost like a rollercoaster. There’s hills that you have to conquer, but then you go back down and have fun and you can relax.”

Hanford-Dole fifth-grader Jordan Feaster said she’s glad to be done with school and tests – on Tuesday she could practically taste summer. But she’s not ready for the pressures of middle school – not yet. Instead, Feaster said she longed for an endless vacation.

“I wish summer could last forever,” she said.