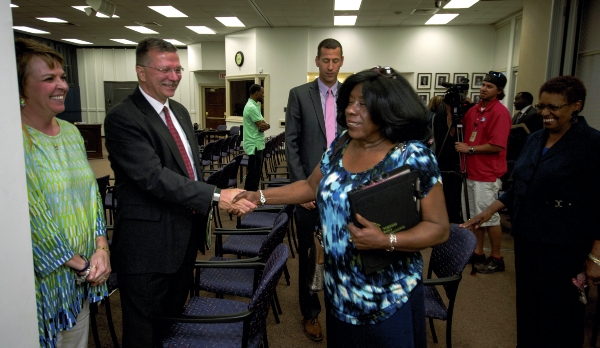 He will begin his tenure on July 18.

Bailey said the city received more than 50 applications for the position. He said he and Zack Kyle, assistant city manager, went to Lynchburg and talked with different people in the community about Stokes.

“We were just very impressed with everything we heard,” he said.

Bailey said a member of the Virginia Police Chiefs Association said that Stokes was “the best internal affairs instructor in the state of Virginia.”

“The city of Lynchburg’s loss of Deputy Chief Stokes is definitely Salisbury’s gain,” Pastor James Camm, of Living Word Ministries in Lynchburg, said in a news release. “It is well known in our community that Chief Stokes has a heart to protect and serve. He has shown himself to be an exemplary public servant and will be a great asset to the city of Salisbury.”

“These are two attributes the city needs and I feel are desirable for the new chief,” Bailey said.

While in Lynchburg, Bailey said that Stokes instituted a Get Out of the Car Program to encourage foot patrols and developed a community policing advocacy committee that Bailey hopes Salisbury can replicate.

“I’m more than confident that Chief Stokes will lead our police force in the right direction and will help to make the community a safer place to live and work,” Bailey said.

Bailey also thanked Interim Chief Brian Stallings for leading the department since the retirement of Rory Collins in December of 2015.

Stokes said he was looking forward to working with the police department and community.

“The opportunity to come here and work with the city of Salisbury to solve crime and build relationships and build this community, I’m really blessed by this opportunity,” he said to the council.

Stokes said one of the first things he wants to do is to get updated on the strengths and weaknesses of the department.

“What I need to do is get here and start to listen,” he said.

During the public comment portion of the meeting, several people voiced their concerns about the safety of the West End and greater Salisbury community. Stokes said he took those comments seriously.

He said he was concerned about the vacancies in the department and unsolved homicides, and he wanted to increase the community’s sense of safety.

Stokes said he did see crime decrease while he worked in Virginia, but Salisbury is a different situation.

“Just because it worked in Lynchburg, doesn’t mean it will work in Salisbury,” he said.

He said the important thing for him to do is listen to the concerns of the police department and the community.

The council members welcomed Stokes to the community.

“We view you as our knight in shining armor,” Mayor Karen Alexander said.

By Amanda Raymond amanda.raymond@salisburypost.com SALISBURY — The zoning request that would allow a wedding venue to operate at the former... read more