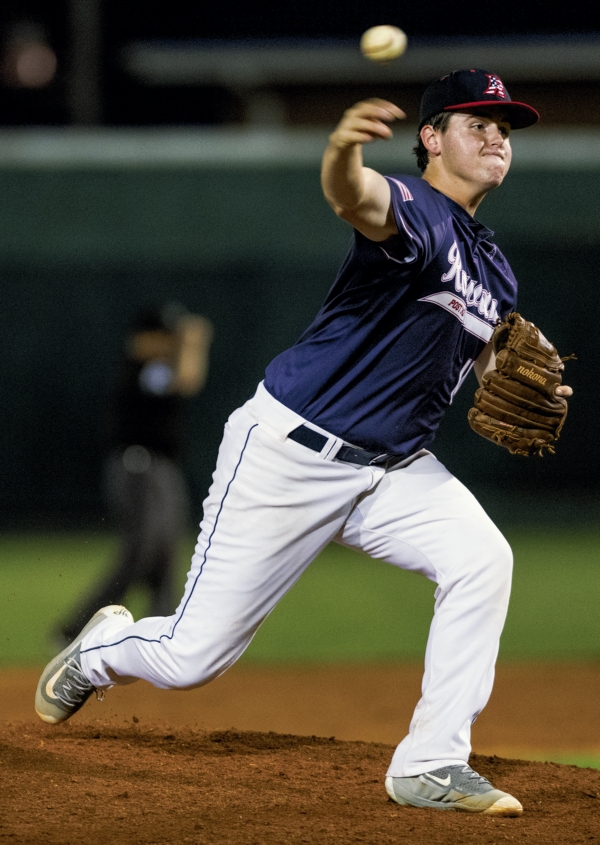 SALISBURY — Four straight walks set the stage for Hunter Shepherd’s walk-off single, as Rowan County rallied in the ninth to beat Mooresville, 5-4, in American Legion baseball on Wednesday night at Newman Park.
Victory was close enough for Mooresville to smell and taste, but you’re not human if you don’t tense up at the grand old ballpark.
“I don’t know that the strike zone tightened up so much as we tightened up,” Mooresville coach Robert Little said. “But it can happen here in this atmosphere.”
Playing without injured slugger Juan Garcia (back), Rowan pulled out its fifth straight victory. While it won’t count in the Southern Division of Area III standings, it nonetheless was a nice, gut-check win.
Mooresville (7-4) had numerous opportunities to put large numbers on the board early, but Rowan starter Bryan Ketchie slithered out of jams in the first, second and fourth and allowed only one run in his five, hard-working innings.
“That was probably the key to the game because Mooresville had a lot of men on base with good hitters at the plate,” Rowan coach Jim Gantt said. “They had their chances.”
Mooresville left 11 men on base.
The biggest early play was a fly ball to center field in the fourth with runners at second and third that was caught on the move by Chandler Blackwelder. Blackwelder’s one-hop throw to the plate was perfect, and Mooresville’s baserunner retreated to third base only to find the runner from second arriving on the scene. Rowan completed the unusual double play in a rundown.
Rowan seized a 2-1 lead in the third inning when Bryan Graham, Seth Cauble and Blackwelder got on base in front of run-scoring singles to right by Dalton Lankford and Shepherd.
It was still 2-1 when Ketchie exited. Sawyer Strickland relieved in the sixth and put up a breezy 1-2-3 inning, but Strickland ran into bad luck in the seventh in the form of a missed call at first base.
“Umpires aren’t going to get every call right,” Shepherd said. “I made the tag on the runner, grazed him with my glove, but the umpire didn’t see it.”
That play led to a run, as Strickland walked scary cleanup hitter Nick Pasco with the bases full to tie the game at 2-all.
“When you get behind a guy like that, the bases-loaded walk is still better than throwing it down the middle for a double in the gap,” Gantt said.
With the bases full, Strickland struck out the next two hitters and kept the game tied. That turned out to be critical.
Rowan (8-3) inched back in front, 3-2, in the bottom of the seventh when Shepherd walked with the bases loaded.
Noah Gonzalez pitched the eighth for Rowan, and Mooresville’s Zac Little, who plays at Wingate, was a terror. Little drove in the tying run with a shot up the middle. Then he stole second and third and scored on a two-out error for a 4-3 Mooresville lead. Rowan third baseman Brandon Walton made a great stop on a hard-hit ball by Jackson Mead, but his throw sailed high after he scrambled to his feet.
Rowan went down 1-2-3 in the eighth against Mooresville hurler Hunter Dula, the brother of former Catawba star and current pro Chris Dula.
Then Mooresville was retired in order in the top of the ninth by Walton.
Mooresville tried mightily to protect its 4-3 lead in the bottom of the ninth and called on fireballing closer Riley Zayicek, a big, talented Lake Norman High product who is regarded as a potential draft pick.
“He’s a great closer, throws hard,” Coach Little said. “He just couldn’t find it tonight.”
Pinch-hitter Hayden Setzer started the Rowan ninth and got some advice from his brother Luke, Catawba’s center fielder and a Legion assistant coach.
“I told him to stay within himself and not try to do too much,” Luke said. “His job was to get on base. If he got on base, it was going to put a lot more pressure on their pitcher.”
Setzer walked, and after No. 9 hitter Cauble also walked — on a close pitch — Rowan had two on, the crowd was noisy, and there was plenty of pressure.
Now Rowan was back to the top of the lineup, and Blackwelder fouled off some tough pitches before walking with a full count to fill the bases.
Mead relieved Zayicek at that point, and Lankford accepted the walk that tied the game at 4-all. Ball four wasn’t close.
That brought Shepherd to the plate, and he stepped up with an aggressive mindset.
“I’m looking for something elevated in the strike zone, looking for a fly ball or even a lousy single,” Shepherd said.
Shepherd hacked forcefully at the first pitch, and came up empty. But he squared up the 0-1 offering, drilling the ball to the gap in right-center for the walk-off win.
“It worked out for us in the ninth,” Shepherd said. “We had some great at-bats in front of me, and I was able to line one up.”
Gantt agreed with that assessment.
“Some young guys went up there in the ninth, but it didn’t look like any of them were in panic mode,” Gantt said. “They were patient.”
Rowan hosts Eastern Randolph tonight in another non-division game.