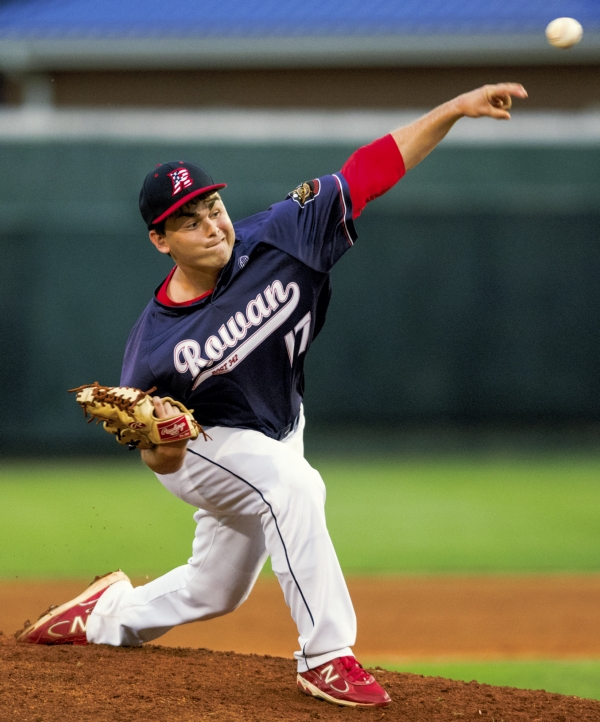 SALISBURY — Rowan County hitters rapped into three double plays with the bases loaded, but Rowan’s pitchers — all six of them — were good enough to beat Randolph County 4-2 on Monday at Newman Park.
While it was a non-division game, it was still Rowan’s most impressive win of the season. Randolph (11-1), arguably the scariest team in Area III and the club that ended Rowan’s 2015 season in the Southeast Regional, lost for the first time.
“I don’t think they’re overly worried about losing this one,” Rowan coach Jim Gantt said. “They’ve got older players and they don’t panic. They’re good enough that they feel like they’re going to be there at the end.”
There was bad news for Rowan’s offense. Center fielder Chandler Blackwelder, hero of Sunday’s win against Concord, was hit by a pitch, flush in the jaw, in the third inning and eventually left the game for medical tests. Slugging third baseman Juan Garcia left the game when his back tightened up. Right fielder Lee Poteat was struck by pitches three times, but HBPs are welcomed by Poteat. He was still ticking at the end.
“With all those hit by pitches (six of them) that we had, we didn’t get very many runs,” Gantt said. “But our pitchers did a nice job.”
There was plenty of good news for the pitching staff — three strong innings from John Owen to start the game, plus three strong innings from Brandon White, the winning pitcher, who was waiting behind Owen.
“I felt good and felt stronger,” said Owen, who had been battered in his first two outings of the summer. “I was releasing the ball more out front than I have been.”
Owen, who struck out three, won 10 games in a brilliant high school season for East Rowan, a lot of them high-stress outings.
“It’s not like he was over-worked as far as his innings in high school,” Gantt said. “But East leaned on him a lot. He was in a lot of tough games and that wears on you.”
Joe Harrison got a big out in the seventh before Colby Myrick got Rowan out of a jam. Hunter Shepherd, who may be the key to Rowan’s staff, made his first pitching appearance of the entire baseball season in the eighth and won a tense, 25-pitch battle against some outstanding hitters. Then Brandon Walton pitched the ninth, showed a sharp slider and good velocity in only his second Legion inning on the mound and earned a save.
Randolph starting pitcher Zach LaBranche took the loss, but he was tough to hit.
Randolph scored in the first inning on Cameron Morrison’s two-out bloop single, but Rowan got that run back right away on Shepherd’s RBI groundout.
Rowan (6-3) went up 2-1 in the fourth when Brett Graham knocked in Poteat with a two-out single.
Randolph fought back to 2-2 in the fifth when White walked Tristan Marsh with the bases loaded.
“Brandon got upset with the strike zone and got a little emotional, but he learned something,” Gantt said. “He was able to settle down and he got the next guy with the bases loaded.”
Noah Gonzalez replaced Blackwelder and impacted the game when he singled in the fifth, stole second on a close play, reached third on Dalton Lankford’s groundball and scored on Shepherd’s sac fly. That put Rowan ahead to stay.
“We did a good job of manufacturing some runs,” Shepherd said.
Rowan got its final run in the sixth when Seth Cauble accepted a bases-loaded walk for a 4-2 lead. After that, it was a matter of hanging on.
Harrison, a lefty, got one out in the seventh while allowing a double and a walk. That walk, after he fell behind Morrison, probably wasn’t a bad idea. With the tying runs on base, Gantt turned to sidearming right-hander Myrick.
“Colby went in there and did what Coach Gantt asked him to do,” Shepherd said. “He told him to pop one up and get a groundball, and that’s exactly what happened.”
Shepherd took the mound for the eighth, and an infield hit to deep short and Clay Richardson’s blistering double to right put Randolph runners at second and third with one out.
“That double was on a fastball, and I knew I had to execute my pitches better and mix it up more,” Shepherd said.
With the pressure mounting, Shepherd struck out the next two hitters to preserve the lead.
“For my first outing, I was happy with it, and my arm felt fine,” said Shepherd, who didn’t pitch in the high school season because of concerns with his left elbow.
Gantt liked what he saw. Whether the left-handed Shepherd closes or starts, his arm is as good as any on the team.
“You could tell Randolph’s hitters picked up their intensity some as soon as Shepherd came in the game,” Gantt said. “He threw 25 pitches, and we felt like that was enough for his first time back on the mound.”
Walton made the ninth a little less tense. With one out, he walked Morrison, but then he got a flyball and a strikeout to end the game.
Rowan plays at Kernersville tonight.