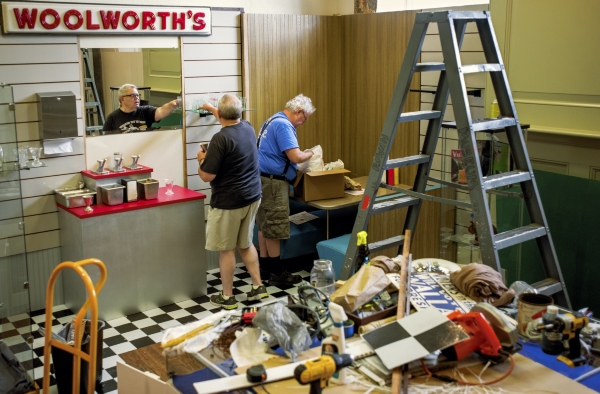 Terry Holt, left, president of the board of directors and chair of the exhibits committee, places glasses on a shelf while Elliott Mathis, vice president of the board of directors and member of exhibits committee, unwraps the remainder of the glasses for the Woolworth’s sit-in display at the Rowan Museum in Salisbury on Monday. The display is part of the, ‘Mama, Why Does the Water Have a Color?’ civil rights exhibit, which opens to the public Sunday. Allison Lee Isley/Salisbury Post

SALISBURY – “Mama, Why Does the Water Have a Color?” is the name of the civil rights exhibit that will be open to the public at the Rowan Museum starting Sunday.

Members of the museum’s board of directors and exhibits committee have been working since last week to take down the Vietnam exhibit and set up the civil rights exhibit.

On Wednesday, interviews will be recorded of eye witnesses’ stories and will be available on iPads while viewing the exhibit.

The civil rights exhibit will feature a re-creation of the Woolworth’s sit-in, segregated water fountains and bathrooms, a bus seat to represent the Freedom Riders, Rosa Parks and other civil rights activists, as well as a jail cell door to symbolize the 16 Livingstone College students who were arrested and charged with trespassing during the integration of Salisbury’s Capitol Theater.

In addition to the re-created scenes, there will be a display called “Other Voices” that focuses on the Ku Klux Klan. Each of the displays will include quotes and photos of those involved.  A second room will display the histories of the local schools and important Supreme Court cases.

A reception, with refreshments, will be held in the Messinger Room at the museum from 1 p.m. to 4 p.m. Sunday.  The exhibit is donation only and will be on display until Dec. 17.