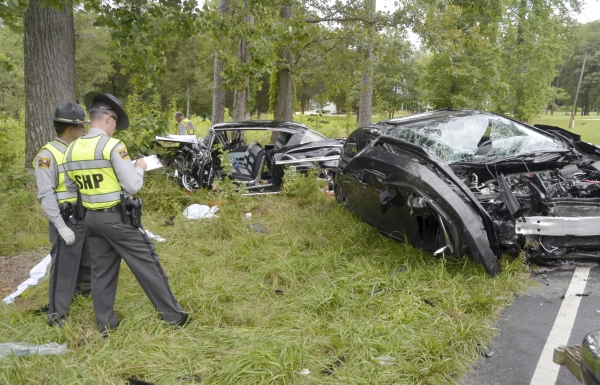 A Kannapolis man was killed Monday and his wife was injured during a two-vehicle collision involving this 1958 Chevrolet Impala and a Honda Civic in the 9400 block of Old Concord Road, less than a mile from Bostian Heights Fire Department. Charges are likely as speed was a factor, according to the Highway Patrol. Shavonne Walker/Salisbury Post

CHINA GROVE — A Kannapolis man was killed and his wife was injured during a two-vehicle collision Monday in the 9400 block of Old Concord Road, less than a mile from Bostian Heights Fire Department.

Highway Patrol officials have not released the names, but say the man was driving and was dead by the time medical responders arrived. His wife, according to Sgt. G.A. Barger, was in shock and airlifted to Carolinas HealthCare System NorthEast. The couple were in a 1958 Chevrolet Impala.

The driver of the other vehicle, a Honda Civic, was a 21-year-old Kannapolis woman, who was in shock, Barger said. She was taken to the hospital via ambulance. She was conscious and seen walking at the scene.

The driver of the Civic was speeding at the time of the crash, and charges are likely, Highway Patrol investigators said.

The collision occurred just before 2:30 p.m.

Traffic was halted in both directions, with many motorists turning around. Firefighters allowed two school buses to pass by the accident scene.

Bostian Heights Fire Chief Mike Zimmerman said he asked the bus drivers to have the children look away once the buses approached the wreckage.