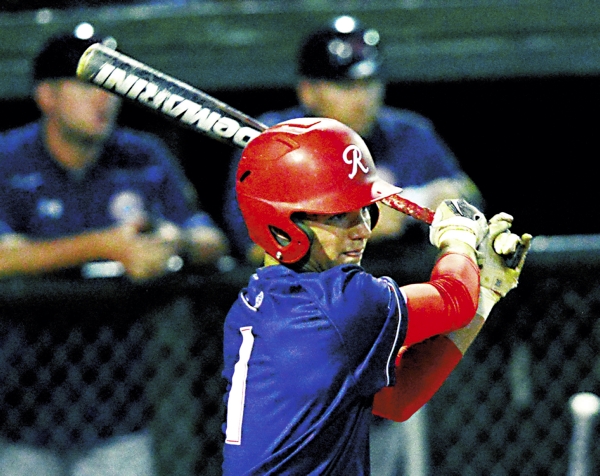 SALISBURY — Chandler Blackwelder’s three-run homer in the fourth inning was the crucial blow as Rowan County beat Concord, 7-1, at Newman Park on Sunday for a divisional win.
It was a blast that startled Concord coach Jaymie Russ, shocked Concord lefty Tyler Thomas — and amazed Blackwelder.
Thomas didn’t make a mistake. It wasn’t a bad pitch. The pitch was up and in to Blackwelder, a middle-sized, 5-foot-11, 170-pound right-handed hitter, but Blackwelder’s hands are quick and he sent the ball soaring over the left-field wall to suddenly bump a 3-1 Rowan County lead to 6-1.
“I went out to the mound and Tyler asked me how in the world he hit that pitch out, and I told him I really wasn’t sure how he did it,” Russ said. “But that kid had good swings all night at everything we threw him. He homered on a pitch that was in on him, and all you can do is tip your hat.”
Blackwelder un-retired from baseball earlier this year. He didn’t play at all his sophomore year, but he was bitten by the ball-playing bug against while competing in slow-pitch softball, and then he made a comeback at East Rowan as a junior. He batted .290, swiped 13 bases and played an exceptional center field for the Mustangs to earn second team all-county honors, but he didn’t belt any homers in 100 plate appearances.
But now Blackwelder is Rowan County’s leadoff hitter. He whacked his first Legion homer in a recent Saturday afternoon game against Cherryville at Kannapolis’ Spring Fling. Now he owns homer No. 2.
“That pitch was inside and it jammed me some,” Blackwelder said. “I’ve been taking advantage of the weight room at Catawba, I’ve been seeing the ball good, and I’ve had a good approach at the plate. But I was as surprised as anyone to see that ball go out.”
Blackwelder, playing with a bit of a knee injury, had a terrific night offensively. He whacked a double and scored in the first inning. He singled in the third inning. Then he singled and scored again in the eighth inning.
The 4-for-5 night pushed his Legion batting average from .240 to .333.
Rowan (5-3, 2-0) got good pitching.
Sawyer Strickland (2-0) started, allowed one run, and didn’t reach 60 pitches until the sixth inning. Concord was hitting the ball on the nose early, but Strickland got a lot of help.
“They hit a lot of balls hard,” Strickland said. “Early in the game they were hitting every fastball I threw, but then I found my curveball and I was able to mix in some changeups to keep them off-balance. I needed all three pitches. That’s a good lineup.”
Right fielder Lee Poteat ran down two well-stroked balls in the second. Third baseman Juan Garcia stabbed a liner and made two terrific plays on groundballs, including a big-league stop and a powerful throw from well behind the bag to end the third inning.
“We made really good plays in the infield tonight,” Rowan coach Jim Gantt said. “We did mess up on a bunt play (in the third inning) because we haven’t practiced that enough, but we were able to learn from that mistake and still win the ballgame.”
First baseman Hunter Shepherd made several tough scoops on throws in the dirt. Second baseman Brett Graham made a charging play for the out that ended the sixth.
“Defensively, Rowan was about as good as it can get,” Russ said. “I was happy with a lot of the things we did offensively. We just hit the ball at people. Maybe tomorrow night, we’ll get 27 seeing-eye hits. That’s baseball.”
Bryan Ketchie pitched the last three innings and earned his second save. Ketchie essentially had to get five outs in the fifth after a catcher’s interference call and a passed ball on a strikeout, but he did it. Shortstop Dalton Lankford fielded a tough hop and started a 6-3 double play to end the eighth, and then Ketchie breezed through the ninth.
Concord’s defense faltered behind Thomas in the first, as Rowan took a 2-0 lead.
Concord (5-7, 0-2) made it 2-1 in the second, scoring the first run Strickland has allowed all season. Connor Rowland hammered a leadoff double, moved up a base on Sam Rodgers’ flyball and scored on Seth Smyly’s sac fly.
Seth Cauble’s RBI single made it 3-1 in the fourth, and Poteat and Cauble trotted home when Blackwelder went deep.
Concord reliever Will Horsley slowed Rowan down after he entered the game in the fourth, and he struck out Blackwelder with the bases loaded to end the fifth.
Garcia sent a single whistling through the left side to push Rowan’s lead to 7-1 in the eighth.
While it sounds like it was easy, it wasn’t. Rowan hitters found holes, but Concord never did.
“Both our pitchers threw strikes and did a good job,” Gantt said. “But this was one of those games where they hit the ball right at us. If those balls had been hit in the gaps, it could’ve been a different story.”
Rowan hosts strong Randolph County tonight. John Owen and Brandon White will be handling pitching duties.