Ketner eulogized as man who ‘made world a better place’ 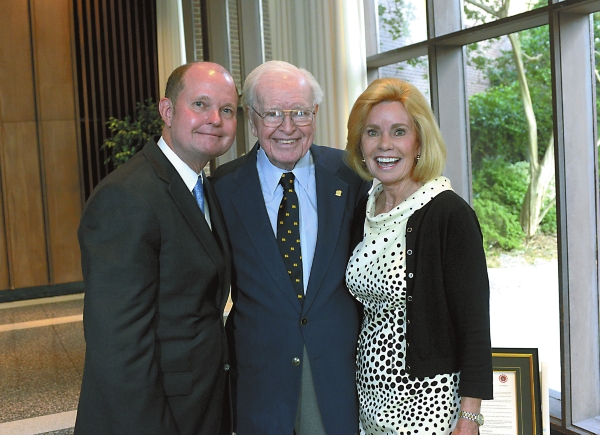 Wayne Hinshaw / salisbury post file photo Ralph Ketner poses at Catawba College on Aug. 27, 2015, with son Robert and daughter Linda after the premiere of ‘Lessons in Leadership,’ a film about Ralph Ketner's life.

These words guided Ralph Ketner throughout his life, Dr. Jim Dunkin said during Ketner’s funeral service on Sunday afternoon at Keppel Auditorium on the Catawba College campus. Dunkin challenged those who came to pay tribute to the grocery store co-founder to do the same.

“The loss of Dad is staggering to our family, and to so many in this community,” Linda Ketner said Saturday. “There is solace in the belief that his legacy and light will live on in those of us who were touched by him.”

A huge spray of dozens of white roses covered Ketner’s handsome walnut casket, with several other gorgeous, white bouquets gracing the stage around it. The First Presbyterian Church choir was seated on the stage, as were Dunkin and Dr. Randy Kirby, associate pastor. John Stafford and Matthew Michael Brown, First Presbyterian’s music director and First Methodist’s music director, respectively, provided piano music. Soprano soloist Teresa Moore-Mitchell sang “He’s Got the Whole World in His Hands,” and was joined later by vocalist Rebecca Stinson in a stirring arrangement of “Goin’ Up Yonder,” backed by Derwood Bynum and Quentin Woodard.

The two women’s voices wove together stunningly as they sang, “I’m going up yonder, to be with my Lord.”

“How would you like to follow that?” Dunkin asked as he came to the podium, and the crowd chuckled.

During the three months of Ketner’s illness, Dunkin said, the two men spent a lot of time together. When death comes close to someone, he said, you learn a lot about them. He learned that Ketner loved his two children, Linda and Robert, along with his four grandchildren. He loved his two sisters, his three brothers who preceded him in death, and the friends that were so dear to him. Ketner died May 30.

“He did so much to make this community and this world a better place,” Dunkin said, but noted that the occasion was not about what he did, but who he was. He recounted stories of Ketner’s sense of humor and his legendary math skills.

When Dunkin visited Ketner during the 95-year-old’s first trip to the Glenn A. Kiser Hospice House, the talk turned to politics, and Ketner began discussing the minimum wage of 30 years ago: $2.39 an hour. He then gave Dunkin the daily, weekly, monthly and yearly totals, jumped 30 years forward, and did the same thing in rapid-fire fashion.

He also said that Ketner appreciated a prayer shawl that the ladies of First Presbyterian knitted for him. Dunkin told Ketner it had 17,000 stitches. About an hour after Dunkin returned home, he received a text from Linda Ketner. She told him her dad loved the shawl, but that his, he said, had 17,100 stitches.

Dunkin said that Ketner showed humility when he bagged groceries wearing a three-piece suit, and that he never felt entitled at church.

“He knew the ground was level at the foot of the cross,” Dunkin said.

Dunkin said that when a parishioner dies, he asks the family, “How is your life different? How has this person affected your life?”

He asked the same of the people who were gathered on Sunday.

“What if everyone left here with the determination to do justice, love kindness and walk humbly?” Dunkin said. “Imagine what could happen.”

Attorney Mona Wallace, who served as one of Ketner’s honorary pallbearers, was uncharacteristically teary-eyed as she recalled a mentor who was like a father to her.

“He just made you want to be a better person,” she said.

The two got to know one another when Wallace joined the Catawba trustees 20 years ago.

“Over those years we had lunch together fairly frequently, and he was a frequent visitor to my law office,” Wallace said.

Wallace was one of the few people outside his family to visit Ketner in hospice care, she said. “He told me that he got 1,428 letters. He absolutely loved it.”

It was but a glimpse of the deep love and respect the community had for him, again evidenced in the 1,000 former employees, Catawba trustees, family members and friends who attended Sunday’s service.

Not only did the community lose a beloved philanthropist in Ketner’s passing, but Glenn Ketner and Jeff Ketner lost an uncle.

In addition, Glenn Ketner’s mother, Addie, died last summer at 104. Ralph Ketner, the late Brown Ketner and the late Wilson Smith had all worked for Glenn Ketner Sr. before striking out on their own to form Food Town in 1957, which eventually became Food Lion.

“Some of that is just sinking in,” Glenn Ketner said of his family’s recent losses. The Ketner family hosted a reception in the Peeler Crystal Lounge.

But, he continued, “We’ve all got an awful lot to be thankful for.”

He and Ned Cline shared a laugh about a mistake Cline made as a young Salisbury Post reporter. Cline completed a writing project for Ketner, who offered to pay him with Food Town stock. No, Cline said, he’d take the $300.

Glenn Ketner reassured him, recounting the story of Jim Woodson who sold Food Town stock to buy a lawn mower. That turned out to be a pretty valuable lawnmower or a pretty expensive one, depending on how you look at it.

Jeff Ketner still remembers that first store’s opening at Ketner Center on a bitterly cold day. The parking lot hadn’t even been paved, and the rough gravel tore through Jeff Ketner’s new shoes. He didn’t notice until later, when he was mopping the floor that night and saw blood on the floor — his own.

“That was rough,” he said, “but we got through it. I bandaged up my feet and was back the next day with a different pair of shoes. I’ve learned a lot from my heritage.”

Jeff Ketner said that he and his uncle had lunch about once a month together at the K&W, and that Ketner always insisted on paying the bill.

“We’d tell stories and share jokes we knew by heart,” Jeff Ketner said. “I learned a lot from my Uncle Ralph and my dad, Brown. I wouldn’t give anything for that.”

Hap Roberts, who was Food Lion’s controller from 1972 to 1982, reconnected with Ketner about three years ago. They’d go to lunch every other month or so.

“Then why don’t you call me Ralph?” Ketner asked.

“So I did,” Roberts said. “Unfortunately, that was just a year ago. I wish I had many more years to call him Ralph.”