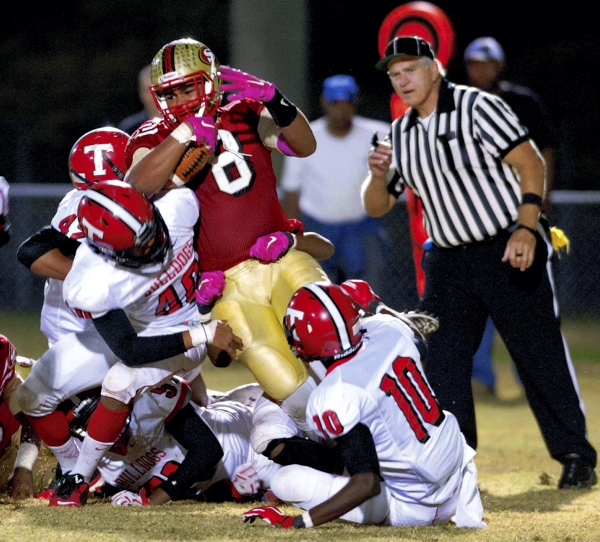 JON C. LAKEY / SALISBURY POST ... Salisbury’s D.J. Alexander (8) was a load when he played quarterback last October against Thomasville at Ludwig Stadium. Alexander is expected to play defense when he continues his education and football career at N.C. Wesleyan College in the fall.

SALISBURY — Division III schools such as North Carolina Wesleyan College don’t often land football prospects as talented as Salisbury’s Donnell “D.J.” Alexander, but that’s where Alexander is headed.
“I tried to be patient and to keep my options open as long as I could,” Alexander said. “I’d been planning and hoping to go to a bigger school, but this was the school that showed the most interest and I wanted to go somewhere they really wanted me.”
Teammates, family and coach Ryan Crowder gathered to celebrate Alexander’s college decision. One of those teammates, safety Darius Jackson, also is headed to N.C. Wesleyan. Going to college as a tag-team should help both players. Both are All-Central Carolina Conference and first-team All-Rowan County players.
Looking over the football roster of N.C. Wesleyan’s Battling Bishops, there are no defensive linemen who have similar physiques to Alexander. He stands nearly 6-foot-5 and weighs 260 well-distributed pounds.
The roster features 6-1, 220-pounders and 5-11, 240-pounders and even a couple of robust 300-pounders, but Alexander, an athlete mobile enough to score 1,052 career points for the Hornets in basketball, could bring a new dimension to the football program of the small, 1,500-student school in Rocky Mount.
N.C. Wesleyan competes in the USA South Conference with schools such as Averett, Greensboro and Methodist.
Crowder knew Salisbury had something special almost from the time Alexander stepped on campus. There aren’t many guys with frames like Alexander’s, and even fewer with his combination of muscle and mobility.
“It’s unusual when a guy comes in as a ninth-grader and is ready physically to play on the varsity,” Crowder said. “But even as a freshman, he already was this athletic, rangy guy.”
Alexander is a worker and hasn’t just relied on his natural talent. When he’s not in the weight room, he’s doing sit-ups and push-ups. He was forced to be a leader for Salisbury’s sports teams before he had a driver’s license, but he’s always embraced that role.
Alexander actually made a major impact for the Hornets in basketball before football. He scored 12 points opening night of his freshman year to lead a win against East Rowan, and he averaged 7.5 points that season. He averaged double figures in each of his next three seasons. He was a two-time All-Central Carolina pick and made first team all-county as a senior.
Still, Alexander’s first love is football, and he’s known for a few years that his future would be in outdoor stadiums.
“A lot of times that 6-5 kid has that college basketball dream, but unless you’re that 6-8 or 6-9 guy, football usually is going to be the best option,” Crowder said.
The largest challenge for Crowder has been trying to figure out how to maximize the big man’s impact. He’s been mostly a defensive end or linebacker, depending on the opponent.
“But with his size and athletic ability he could have played almost anywhere on the field for us,” Crowder said. “At different times, he’s lined up at running back, quarterback, tight end, receiver, strong safety, linebacker and defensive end. That means he’s been at every skill position on offense and on all three levels of the defense.”
One of the lasting memories of Alexander will be of him playing quarterback in the stretch run of his football career. It was a move made out of desperation, but Alexander made the most of it and looked impressive. He rushed for 91 yards on seven carries against West Davidson and threw for 131 yards and a TD against North Rowan.
“I was proud that I had the ability to play a lot of different positions,” Alexander said.
It wasn’t always easy for Alexander. There were disappointments and setbacks, including an eye injury between his sophomore and junior seasons.
But he finished with a loud bang. His senior football season included 12 sacks, plus three fumble recoveries and a pick-six.
“I had to overcome obstacles along the way,” Alexander said. “But I got to where I am now because I had good coaches, good teammates and a lot of family support.”
Alexander expects to play as a defensive end with a hand on the ground for N.C. Wesleyan.
He may have a chance to make an early impact for the Battling Bishops. They’re taking on perennial Division III national champion Mount Union (Ohio) in their home opener on Sept. 10.