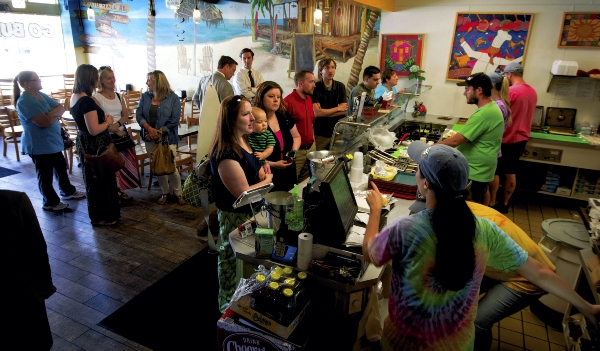 Customers place their orders during a midweek lunch. Mikey Wetzel has taken the next step after have a huge success with his Go Burrito restaurant, by expanding the Go Burrito name by selling franchises to entrepreneurs to start their on Go Burritos. Wentzel has formed Go Ventures Inc which will sell, train and support their franchises. Wetzel has gone from selling burritos to selling burritos restaurants. Thursday, June 2, 2016, in Salisbury, N.C. JON C. LAKEY / SALISBURY POST

SALISBURY — Go Burrito restaurants can now be opened all over the country now that the owners are offering franchise opportunities.

Go Burrito, owned by Mikey and Lily Wetzel, is at 115 W. Fisher St. in downtown Salisbury. They opened the restaurant in February of 2013.

Known for its beach vibe, the restaurant offers burritos, nachos, quesadillas, salads and tacos, all made-to-order with fresh ingredients. It also has the only rooftop patio and bar within 50 miles of the area.

The restaurant grills their burritos and has a homemade salsa bar.

Mikey Wetzel said the final push for him to start offering franchises was a book he read that he got from a man at a National Restaurant Association conference.

Wetzel said that although he was skeptical, he “read the book and it made a lot of sense.”

He is now partnering with Franchise Innovation Group out of Tennessee to develop manuals, training classes and other elements to make the Go Burrito restaurant repeatable for others.

Wetzel used to work as a technical director for Xbox and Microsoft Games Studios. The restaurant was supposed to be a side job. He originally wanted the restaurant to be able to run itself.

“I’ve got to get this business working without me being involved,” he remembers thinking.

He wanted to get one restaurant up and running and then open three more after a year or two. Before that could happen, Wetzel said he was laid off from Microsoft, so he poured all his energy into the restaurant.

His work paid off. Wetzel said the restaurant is more successful than he thought it ever could be. In its first year of business, the restaurant had $800,000 in sales. In year two, it was $1.18 million. The restaurant celebrated three years of business in February with $1.49 million in sales that year.

Compared to data from QRS Magazine, Go Burrito ranks in the top 15 quick service restaurants in average sales per unit for 2014.

Wetzel said this year’s sales will probably be around $1.6 million.

The restaurant sells around 3,000-4,000 burritos a week. The most burritos sold in a day was 700, and that record has been broken three times this year already.

Wetzel said he puts $500 in the tip jar every time the record is broken.

“I have a vested interest in every Go Burrito,” he said.

“It’s my brand, my logo, my website, my colors,” Wetzel said.

The restaurants will have to have the same laidback, beach atmosphere, hours and cooking techniques as the original Go Burrito. Wetzel said he is working with architects and interior designers to develop an official design for the restaurant that can be replicated.

“We’re trying to do it so that all of the parts that matter are carbon-copied,” he said.

The franchisees will have some freedom to make the restaurant their own. For example, Wetzel said the wall mural on the first floor of the restaurant can be modified to reflect the specific town or manager, like adding college Easter eggs to the mural if the restaurant is in a college town.

He did say he would offer extensive support to franchisees, from a four-week training course to sending employees from an already established Go Burrito to help at the new one.

In order to develop the brand of the restaurant, Wetzel also created a parent company called Go Ventures. The headquarters for Go Ventures will also be downtown at 124 E. Innes St.

Wetzel said he hopes to have the building renovated by the end of the year. The top floor will become classrooms and presentation rooms to train franchisees. There will be offices for the eventual sales team, IT department and marketing team. There may also be a one-bedroom apartment where franchisees can stay during their training period. The basement will be used for storage and the first two floors Wetzel hopes to rent out to a restaurant.

Wetzel said he is excited to be the “visionary guy” while letting others help him build his restaurant business.

“I think the fun part is involving other people,” he said, “…and letting them grow it.”