Downpour doesn’t stop good time at Pops at the Post 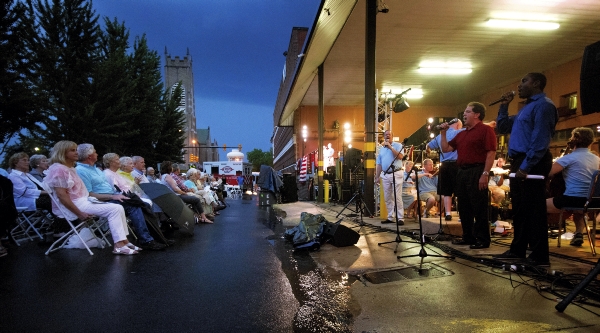 The crowd is entertained as six local singers perform ‘My Way.’ Rain did not mute the thrill of the gathering in the open air for the 12th annual Salisbury Symphony Pops at the Post concert in downtown Salisbury on Saturday evening. JON C. LAKEY / SALISBURY POST

SALISBURY — Raindrops couldn’t muffle the sounds of the symphony at Saturday’s Pops at the Post event.

The Salisbury-Rowan Symphony played under cloudy skies at the Salisbury Post loading dock near the intersection of Church Street and W. Innes Street in downtown Salisbury.

Thousands of people attended Pops at the Post, some sitting on blankets, others in camping chairs, others still just standing and walking around.

Pops at the Post started in 2005 as part of the Salisbury Post’s centennial celebrations. It has continued as an annual, free community event.

The Salisbury Swing Band had couples dancing while playing and singing a couple of songs before the event started.

Maestro David Hagy returned to lead the orchestra in his signature yellow jacket. He started the night off with “Symphony No. 6 III. Allegro Molto Vivace” by Peter Tchaikovsky.

Michelle Strong, a middle school coordinator for the Rowan County Crosby Scholars, attended the event last year. She said it is nice to see everyone coming together and being friendly towards one another.

“You get to see the essence of the town,” she said.

A light rain came down after about 20 minutes. But most were prepared with umbrellas, some having used the same umbrellas earlier in the day to shade themselves from the sun.

The rain seemed to stop for a few minutes before a heavy downpour drenched the crowd while the orchestra was playing “Water Music: Allegro Deciso” by George Frederic Handel. Many ran for cover under tree canopies and the ATM drive-through of the former First Bank.

Others embraced the rain, choosing to stay and get soaked out in the open parking lot. Children took full advantage of a chance to play in the rain and jump in puddles.

Watching the kids play ended up being a highlight for Thomas Armstrong, an attendee. He, his wife Joyce and 9-month-old son Noah brought their blanket under the protection of the ATM drive-through when it started to drizzle.

“Seeing the kids playing a while ago was worth it,” he said.

Armstrong said the rain did not affect the event much because the orchestra kept playing and people stayed to listen.

Armstrong also said they brought Noah so that he could be exposed to the music.

“We’re trying to introduce him,” he said.

Joyce Armstrong said they have attended the event for the last five years.

“We love the orchestra,” she said.

The rain stopped after about 10 minutes and people started to migrate back to the open parking lots to enjoy the rest of the show and visit food vendors like TnG BBQ, Dolce Italian Ice and Kabobs Gourmet Food Truck. Cheerwine also gave out free drinks.

One fun song that the orchestra played was theme song from the television show “The Fresh Prince of Bel Air.” Lyrics were put up on screens and the audience was invited to rap along. Hagy said that rap music was “here to stay,” as showcased by the popularity of the Broadway play “Hamilton,” a rap musical about the life of Alexander Hamilton.

Hagy had a tribute to Prince planned, but he said he could not get permission to play the songs in time for Saturday. Instead, the orchestra played songs to match the wet evening — a rain melody that included the songs “Raindrops Keep Falling on My Head” and “Singing in the Rain.”

“Now you can actually say you’ve sat and sung, or at least listened to, ‘Singing in the Rain’ in the rain,” Hagy said.

The orchestra also honored Frank Sinatra by playing songs that he made famous, including “I’ve Got You Under My Skin” and “The Lady is a Tramp.”

Lee and Bobby Wagoner, members of the Civitan Club of Salisbury, were one of the couples dancing during the “Pops Hoedown.”

Lee Wagoner said she did not think the rain did much to dampen the spirits of attendees.

“The rain added a little special touch to it,” she said.

Bobby Wagoner said he liked the relaxing atmosphere of Pops at the Post.

Madison Lovingood loved the atmosphere so much when she attended the event last year that she decided to spend her Sweet 16 at Pops.

She said she and her friends from the East Rowan band program enjoyed the event despite the rain.

The symphony ended up skipping “The Flintstones Meet the Jetsons” piece because of more bad weather forecasted to roll in.

In spite of the threat, most people stayed to hear the last three songs. The lightning flashing in the skies overhead added nicely to the deep, thunder-like sounds of the percussion section during the “’1812’ Overture.”

Hagy sent crowds home before another downpour could begin, saying he hoped everyone had a great, albeit “slightly wet,” evening.