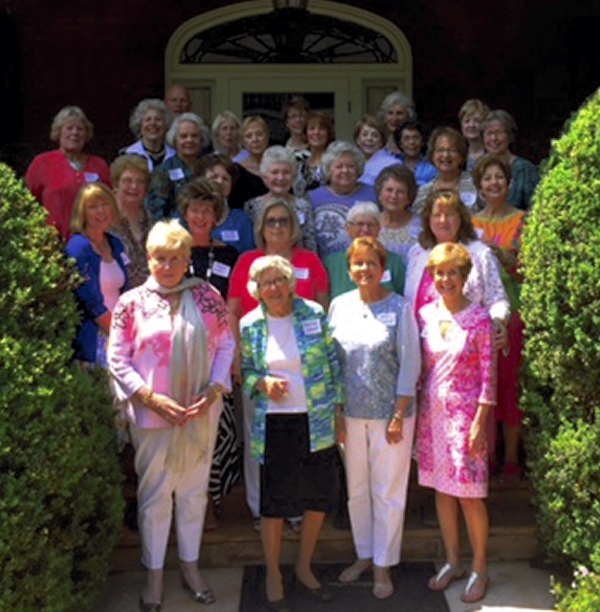 The Annual Membership Tea, celebrating the 80th anniversary of theNHRMC Auxiliary was held May 12.

The Annual Membership Tea, celebrating the 80th anniversary of theNHRMC Auxiliary was held May 12, 2016 at the home of Rachel Oestreicher Bernheim.

Mrs. Bernheim’s parents were instrumental in the development and support of the hospital.  Mr. Irvin Oestreicher was a Charter Member  of the Board of Trustees, and his wife, Bert, served in many areas of the hospital and was a former President of the Auxiliary Board of Directors.

In June, 1936, one hundred women met at the newly reconstructed Rowan Memorial Hospital on Mocksville Avenue.  Determined to meet the health needs of the community, as well as furnishing the hospital and landscaping the grounds, the auxiliary was organized with Mrs. Gettys Guille as the first president.  On October 6, 1936, the by-laws were officially approved by the Board of Trustees of the hospital, signed by Dr. J. Ernest Stokes.

In 1956, the auxiliary opened a hospitality shop on the ground floor which was furnished by funds raised by “Fall Frolics”.  This event at the Salisbury Country Club was attended by guests wearing period clothing.

The shop was manned by auxiliary volunteers.  When the hospital was renovated in 1969, the shop moved to the hospital lobby.  In 1984, further renovations enlarged the hospitality shop and added a separate gift shop.

Significant changes continued in 2000, resulting in much larger facilities for both.  A manager and paid workers staffed the hospitality shop, and the gift shop was still staffed solely by volunteers.  In 2009, the shop closed, but the gift shop remains to the present day and has added a paid manager.  This shop operates under the supervision of the auxiliary.  Donated books are available for a minimal cost as you enter the shop.

The volunteer program was organized in May 1976, with 109 active members.  As the services and number of volunteers increased, the hospital employed a full-time Director of Volunteer Services.

The Auxiliary donates hundreds of thousands of dollars to the medical center.  These funds are used for the purchase of new equipment, supplies for patients, renovating areas of the hospital, and indigent care.  Each pediatric patient is given a “Care Bear”, and coloring books and crayons.  The Auxilliary also provides socks for all breast cancer patients undergoing treatment.  Furnishing the chapel, maintaining the prayer room, furnishing the pediatric wing with toys, murals and furniture, providing equipment and décor for birthing rooms including a birthing simulator for nurse training, the emergency department waiting room, playground equipment for the medical center daycare center, a Hoover lift, Nintendo Wii, and television for rehab patients are gifts of the Auxiliary.

In 1988, when the Rowan Memorial Hospital Foundation was activated, the Auxiliary was the first to give a major monetary contribution.  Subsequent gifts to the foundation have been an Infant Care system for the Nursery, a portable heart defibrillator and monitor, a DINAMAP blood pressure monitor and vital signs monitor for the emergency room.

Nursing Scholarships are given each year to qualified individuals to supplement their education at Rowan-Cabarrus Community College.  These students are encouraged to seek employment at the medical center upon receiving their nursing degree.  Volunteer Scholarships are available for graduating seniors who have served in the Junior Volunteer Program.

Auxiliary members serve in many different areas of the medical center including, but not limited to, the following:

The Auxiliary raises funds through the Gift Shop, the Tree of Hope project at Christmas, (one of the oldest traditions of the holiday season in Salisbury), Jewelry and Uniform Sales, and member contributions.