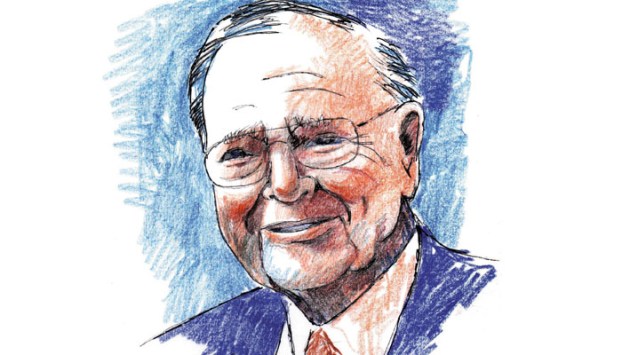 Food Lion co-founder and community philanthropist Ralph Ketner died Sunday. He was 95. Illustration by Mark Brincefield, for the Salisbury Post.

The funeral for Ralph Ketner will be held 2:30 p.m. Sunday in Keppel Auditorium at Catawba College, with a reception to follow in Peeler Crystal Lounge. The family will hold a private burial. Summersett Funeral Home is in charge. When he met with Brien Lewis, president of Catawba College, Ketner often brought a hand-written list.

And after he roamed the aisles of Store No. 1 late at night  — back when he had his own key — Ketner left notes for store manager Ronnie Marsh.

“He was strict, he was picky, but he was fair,” Ronnie says, “and it was never personal.”

As friends prepare for Ketner’s funeral Sunday, they recall a man who was sharp enough to turn a small-town grocery store into the fastest growing chain in the country,  yet so compassionate that his death leaves a sizable hole in Salisbury’s collective heart.

Ketner never seemed to stop thinking about how to do things better or how to help other people, according to those who knew him.

He touched thousands of lives. Here are a few of them.

The first thing Meg Ham did after being promoted to president of Food Lion was call Ketner.

“To have that wisdom around the corner was incredible,” she says. “Not many people are able to meet with the founder of their company,”

Every so often, when the mood struck, she would ask Ketner to lunch at an area restaurant. Ham says the ever-efficient Ketner brought typed notes to be sure they used the time productively.

“His mind was always going on Food Lion’s business and what we could do,” she says. Ketner shared his ideas respectfully, she says, and she valued his insights and time.

Ketner’s death last Sunday at the age of 95 saddened Food Lion employees, Ham says. Many considered him a rock star.  They posed to have their photos taken with him at employee picnics and helped celebrate his 95th birthday last September at Rowan Helping Ministries.

The company held a tribute to Ketner at Founders Hall on Wednesday. In his memory, employees are wearing blue ribbons through Sunday.

Ham says many of Ketner’s strategies had an impact on the grocery industry. He pioneered low pricing, forward buying, having conversations with vendors and other concepts. But she came away from their meetings with more than ideas.

“The Mr. Ketner that I have gotten to know … is so much more than the business side,” Ham says. “He was a generous man who obviously was very smart and very bright.”

When people became aware in January that Ketner had cancer, Kyna Grubb was one of many who sat down and wrote him a note.

“I was raised in a Food Town/Food Lion shopping cart,” Grubb said.

She went on to graduate from the Ralph Ketner School of Business at Catawba. As a mother, she fed her family well, thanks to Food Lion’s extra low prices. Later she worked for Food Lion for 10 years — a job with benefits that helped send her children to college.

“And I work in a building that he basically made happen.”

Ketner donated $150,000 toward the construction of Rowan Helping Ministries’ first building in 1988, and he raised the rest of the needed funds over a weekend. The building included a soup kitchen and homeless shelter. No one is going to freeze on the streets of my town, Ketner said.

“He was about helping the common man,” Grubb says. Ketner achieved spectacular things in the business world, she says, “but it’s his compassion for others and his faith that earned my respect.”

Ketner continued to support the organization year after year — and to put in his 2 cents. Grubb remembers the time she shrank building plans in a document but forgot to change the key. “Your building is only 8,000 square feet,” Ketner said. No one else caught the mistake.

“He had high expectations and would call you out. He questioned things. A good citizen does that,” Grubb said.

Just after becoming president of Catawba in 2012, Brien Lewis set out to watch the college’s team play in the College World Series in Cary. Ketner, a college benefactor and  board of trustees member, went along.

“That’s really where I got to know him,” Lewis says.”We really hit it off.”

Each Sunday, Ketner and the Lewis family sat near each other at First Presbyterian Church, and on Tuesdays the two men shared a table at Salisbury Rotary Club meetings. “When I wasn’t at either one, he would ask where I’d been.”

Ketner’s attention to detail was exceptional. “You’d ask him to take a look at a lengthy document. … He’d come back with pages of notes,” Lewis said. Ketner would point out inconsistencies between paragraphs that were pages apart. “Ralph would catch it. He was very generous with his time.”

And with his notes. “Until recently, a couple of weeks wouldn’t go by without getting some sort of note or suggestion,” Lewis says.

Catawba officials are waiting to hear if NCAA rules will allow them follow through on Ketner’s recent suggestion to offer football tickets to an entire high school each week. Lewis says Ketner often transferred lessons learned at Food Lion — the importance of getting people in the door — to Catawba and its desire to attract people to campus.

Most of all, Lewis is grateful for the example Ketner set for the Lewis children. Ketner’s personality, life story and philanthropic mindset — and indifference to material concerns — made him a good role model, Lewis says.

“What a delightful man he was. He always had a smile, he always welcomed you warmly. You couldn’t help but enjoy being with him.”

Ketner would read about the death of a child, for example, and send help to the parents. Or if an adult died in tragic circumstances, he’d send money to the children.

Ketner himself lost both parents by the time he was 11.

“He was in those situations when he was young,” Bates says. “Maybe someone reached out to him, or he wished they had.”

Meticulous himself, Ketner set the bar high for Bates when she typed documents for him. “He would slide little mistakes in, just to see if I would catch it,” she says.

Until his recent illness, Ketner went to his office in Ketner Hall around 9 a.m. each weekday and stayed until lunch. He went to the office after church on Sundays, too, and waited an hour for the crowd to go down before heading to K&W Cafeteria. It was not an idle hour, though. Bates says she often found notes and papers on her chair Monday morning.

His tastes were simple — Cheerwine, barbecue, banana pudding. Pound cake was a favorite, too, and he gave many away each Christmas with copies of his favorite poem, “Heaven’s Grocery Store.”

Ketner retired in 1991 and did not use a computer, but he was fascinated with how the internet worked and once asked her to Google his name, Bates says. He was amazed at the thousands of results.

That was a rare moment of self-interest.

Ketner was generous with his gifts and time and talent, Bates says. “It made me want to do more and be better… I feel like we’re all better people by having known him.”

Twins Donnie and Ronnie Marsh went to work for Food Lion as teenagers, earning 60 cents an hour when the company had four stores. Now it has more than 1,100 stores in 10 states.

Ketner was a tough boss who expected employees to give 125 percent, Donnie says. The rules for working for him were: never be late for a meeting, not even for a minute; don’t lie; and don’t think of the store you run as yours. Customers come first.

Donnie recalls the time Ketner asked a store manager why a certain product was not on the shelf. The manager said the warehouse ran out of it. Ketner, who knew every item Food Lion carried, checked with the warehouse and fired the man in less than 30 minutes. The warehouse was not out.

“We knew when Mr. Ketner was mad. His lips would turn white,” Donnie says.

But Ketner didn’t hold on to his anger, and the Marshes say Food Lion was like a family. They worked with Ketner, Wilson Smith and Tommy Eller — the last of the original crew who is still around — and remained good friends long after they retired as store managers. Food Lion’s generous profit sharing it possible for them to retire at 45. They could sense that the fast-growing company was changing, and they got out.

But they’ll be forever thankful to Ketner and Food Lion.

“I’d a probably been flipping burgers at Hardee’s if it hadn’t been for Food Lion,” Donnie says.

Ronnie says he would have worked in a mill, most likely.

Instead he had a good career, 18 years as manager of Food Lion Store No. 1. Ketner would come in at night when the store was closed and leave notes about things he found wrong, usually related to cleanliness. “I was used to it,” Ronnie says. “He was right.”

Ketner was generous but firm. “He thought of others more than himself,” Ronnie says — a trait Ketner shared with the other top leaders. “They took care of the workers, and we appreciated it.” And they gave away much of their wealth to help others.

Ketner’s death did not come as a surprise, Ronnie says; people close to the family knew his health was deteriorating. The Marshes say they can only feel grateful for the opportunities Ketner helped create for people like them and a community like Salisbury.

“He had such a good life,” Ronnie says. “I doubt if there will ever be anybody like him.”

By Amanda Raymond amanda.raymond@salisburypost.com SALISBURY — Salisbury was able to learn more about members of the transgender community at Thursday’s Trans... read more