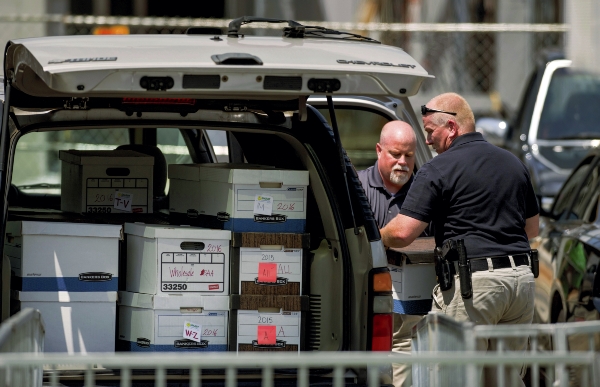 JON C. LAKEY / SALISBURY POST State law enforcement officers from the NCDMV License and Theft Bureau investigated the Auto House location on Jake Alexander Blvd. on Friday afternoon. Officers were seen removing several file boxes from the offices and loading them into a SUV. Customer have complained of rebranding some lower priced cars as higher priced models and selling them at an inflated price and not disclosing vehicle damage to the buyer.

SALISBURY — One by one, investigators with the N.C. Division of Motor Vehicle License and Theft Bureau carried out boxes and a computer hard drive from the Auto House car dealership in Salisbury Friday.

The action comes just weeks after customers came forward saying they bought vehicles — mislabeled and the prices marked up — from Auto House locations in Salisbury and Mooresville.

Dozens of customers have also filed complaints with the N.C. Department of Justice accusing the Salisbury used car dealership of not disclosing damages to cars and intentionally employing a bait-and-switch scheme to get people into the dealership in hopes of buying cars under the guise of promising them money, a car and other prizes.
Customers said the dealership replaced inexpensive vehicle emblems with higher ones so the price could be marked up in some instances by $1,000 up to $9,000.
The Post recently obtained over half a dozen complaints filed with the state Department of Justice by customers of the Salisbury location. The Post has made attempts to reach representatives with the Salisbury location and have not received a response.
The Post was unable to obtain comments from the N.C. DMV License and Theft Bureau, nor from Auto House.
The state justice department’s Consumer Protection Division’s investigation into Auto House is ongoing, a spokeswoman said.
More customers have since come forward with similar complaints about both dealership locations.
Any consumer who experiences a problem with Auto House is encouraged to file a complaint with N.C. Department of Justice, either by phone toll-free within North Carolina at 1-877-5-NO-SCAM or online at ncdoj.gov.
You Might Like

The sun’s shining on Pops at the Post on Saturday

By Rebecca Rider rebecca.rider@salisburypost.com SALISBURY — When the Salisbury Symphony sets up in the loading dock of the Salisbury Post,... read more