The sun’s shining on Pops at the Post on Saturday 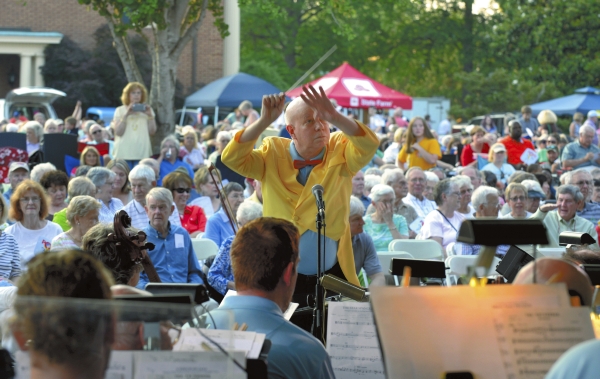 Conductor David Hagy leads the Salisbury Symphony during last year's Pops at the Post. Photo by Wayne Hinshaw, for the Salisbury Post.

SALISBURY — When the Salisbury Symphony sets up in the loading dock of the Salisbury Post, it’s sure to be an evening of magic and music. This evening’s concert marks the 12th year of Pops at the Post, and the theme, “Let’s Have Fun,” embodies the spirit of the event.

Weather reports are calling for partly cloudy skies in the evening, but the music making will happen outside regardless, symphony Executive Director Linda Jones said.

This year, the Salisbury Symphony program includes a variety of pieces, including tributes to two musical icons: Frank Sinatra and Prince.

In January, the symphony performed a Sinatra Big Band Bash in honor of the crooner’s 100th birthday. Following up on the event’s big success, Pops at the Post will feature a Sinatra medley featuring many of the same singers who performed at the Big Band Bash.

And with a medley of songs by Prince, the symphony will tip its hat to the late singer, who died in April. The piece was arranged by John Stafford, and includes bits from the songs “Let’s go Crazy,” “Purple Rain,” and “1999.”

For a little dash of extra fun, the symphony will play a “Pops Hoedown” section with toe-tapping favorites like “Turkey in the Straw” and the “Chicken Reel.”

And what’s more fun than a sing-along? Or in this case, a rap-along. During the evening performance the audience will be invited to join in the music by rapping a piece set to the theme from “Fresh Prince of Bel Air.”

While fun and flow are the names of the game for tonight’s show, the event will still tether itself to Pops tradition with the “1812 Overture,” “America the Beautiful,” and the “Washington Post March” renamed the “Salisbury Post March” in honor of the occasion.

The event is held in the 100 block of South Church Street downtown. The Salisbury Swing Band will perform from 5 to 7 p.m. The symphony concert begins at sundown.

Spots to watch the free concert are available in the former First Bank parking lot and the Salisbury Post parking lot; bring your own chairs and blankets. Chairs can be set up starting at noon; tailgaters can park their vehicles from 1 to 7 p.m.