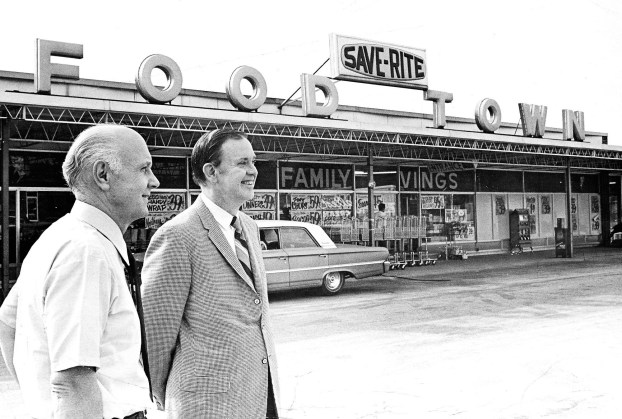 Wilson Smith and Ralph Ketner stand in front of the first Food Town store in the Ketner Center.

… Ketner a lion of a leader

The first time I met Mr. Ketner was in the No. 1 Food Lion store, 25 years ago. I had my four children with me. He asked each of their names and discussed dinosaurs with the 4-year-old. We laughed about harried mothers and he handed me a $5 Food Lion coupon.

From that day forward, each time I ran into him, he remembered my name and asked about my kids. We last spoke at an event at Oak Park. He was as sharp and as charming as ever. His death will leave both a void and a legacy.

Thanks, Mr. Ketner, for employing my husband for 32 years back in the day, when profit sharing was given to the employees. What we have today is because of you and your graciousness. You built this company with your heart and we thank you for it. We will miss you.

Ketner was a superb leader. Wish more were like him. His philosophy of “customers first, employees second, stockholders third and management last” no longer applies to most companies. Sad.

I spent many hours in the Ketner home during the 1966-68 years. He was a Southern gentleman, and his focus during those years was getting Food Lion in the best shape possible. Linda Ketner, his daughter, has been devoted to her dad for as long as I have known her, and likewise. He will certainly live on in the lives of Linda and other family members.

He was one of our most humble guests at the Rufty Holmes Senior Center Computer Club. He shared with us his ability to grow a business without the use of the internet. His success was centered around helping people.

Mr. Ketner was an original investor of mine in Hambone Inc. He was always available to me for advice and leadership as well as encouragement.

I started calling on Mr. Ketner when he had seven stores in the ‘60s. After 58 years in the food business, six at retail and 52 as a food broker, I have called on a lot of people in my job.

Mr. Ketner was unquestionalby the best I have ever called on. He was always fair to me. I was always prepared when I saw him, as he would not put up with salespeople that came in unprepared. He had more effect on me that helped me in my career than anyone I have ever worked with, and there have been some other really good ones.

I have tried to pattern my work ethic after him and feel I have been successful in working hard, doing what you say, and keeping the customer in mind. I am still active in the business as a food broker, but have maintained a relationship with Mr. Ketner. …

Mr. Ketner was a giant of the industry and paved the way for a great many successful people in this business. He always gave more than he got from the business, and his concern for others made him the person that will be remembered as one who shared success. There will be a special place in heaven for Ralph W. Ketner.

Albert Einstein once said “I speak to everyone the same way whether he is the garbage man or the president of the university.” I believe this was true of Mr. Ketner as well.

I met Mr. Ketner last year as he was going into the Ketner Center Food Lion. He was such a nice person. You wouldn’t know he was such a wealthy man as he never seemed to hold himself above anyone else. This county and city have lost a great person and will be missed by many I am sure. But his legacy will live on in millions of loyal Food Lion customers. Thank you, Mr. Ketner, for sharing your dream with us.

A lion himself, Ralph Ketner has been loved and will be missed by thousands of people he didn’t even know.

Imagine Salisbury without Mr. Ketner and the enormity of his contributions. Today I was at the YMCA and noticed a plaque that said he had donated the racquetball courts. After that, I picked up some groceries at Food Lion No. 1. Then I took a walk around the beautiful Catawba College campus. That was just this afternoon! There’s also the homeless shelter, whole neighborhoods, and the list goes on and on and on. And of course there are the thousands of people who are out there making a difference themselves — people he inspired and contributed to.

What a difference a life can make.

It was an honor to have worked for Mr. Ketner. The corporate world — and indeed the world in general — needs more people like him.

A humble and gracious man, who despite his success, always made time for people with a kind word or smile. Although he would despise the attention, Salisbury needs to find a way to memorialize this great citizen in perpetuity.

How about replacing the “Fame” statue with one of Ralph Ketner, someone we can all be proud of?

“For those who served, like me, there’s nothing better than looking up and seeing Old Glory still flying up there.”... read more