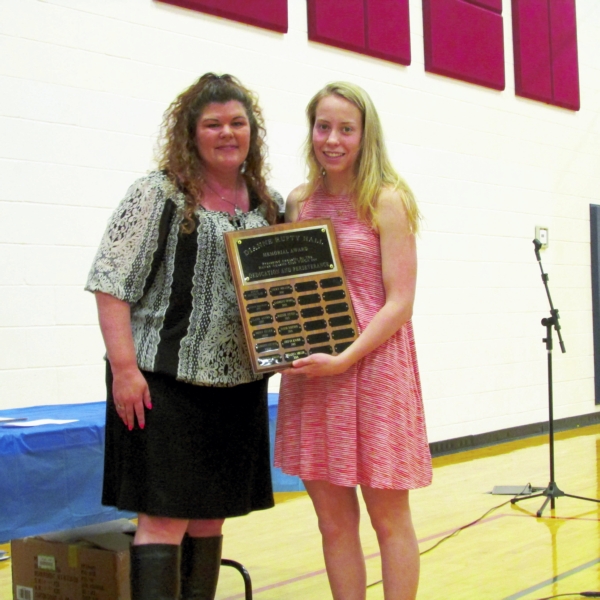 The Rowan Aquatic Club YMCA (RACY) is building on swimming, one stroke at a time, honoring local youth who love the sport and enjoy competition.

RACY held its annual swim banquet last month at the J.F. Hurley YMCA. Over 80 people attended to honor the athletic and school-year academic accomplishments of the RACY club swimmers who range in ages from 5-18.

RACY, a USA sanctioned swim team that promotes the YMCA values of building a healthy spirit, mind, and body, includes club swimmers from Rowan and Stanly counties, as well as the Thomasville YMCA.

As part of the annual banquet, RACY honors those athletes who earn motivational times as determined by USA Swimming. For each RACY swim member who earns an “A” motivational time, the club team presents a personalized swim jacket, embroidered with the Marlin team logo and team name to each athlete.

Those earning the coveted “A” time jacket during the second half of the 2015-2016 swim season were Lauren Ball, Julia Brown, Abby Buechler, Kinsey Cook and Olivia Shorter.

RACY swim member Alex Van Der Linden, who has been on the team for three years, received special recognition as a graduating senior. Alex was treated to a PowerPoint presentation capturing highlights of his time swimming with RACY.

Over 32 of the athletes earned all A’s throughout the 2015-2016 school year, while over 14 athletes earned the A/B recognition. Each swimmer was presented a certificate to honor their academic excellence.

High Point Award, presented to those who led scoring across a variety of events at swim meets, were presented to Breanna Miller, Roshen Amin and Chris Kafitz. Most Improved Awards went to Maggie Hostetter, Matt Epley and Amy Gonzalez.

The Dianne Rufty Hall Memorial Award is presented as the final award of the evening and has been part of the awards banquet since 2004. The award honors a former parent of two RACY athletes who overcame a variety of personal hardships and exemplified the “never say quit” attitude.

At a young age, Rufty Hall lost an eye to cancer, but continued to excel at all athletic endeavors. She was an animal lover and was fiercely committed to her two children, Matthew and Mandy, whom she raised as a single parent. As an adult and faced with stage 4 cancer, Dianne continued to support her children by attending swim meets and helping out on the swim deck.

The Dianne Rufty Hall Memorial annual award winner is selected from all current RACY athletes by the team coaches based on the athlete’s dedication and perseverance. The 2015-2016 award went to Breanna Miller, a student at Graystone Day School.

As a sophomore with perfect attendance and an “A” average, Breanna initiated monthly fun swim relay nights to encourage all ages and skill levels to work together in team building activities. The fun relays also emphasize community service by encouraging swimmers to donate canned food items, which Breanna collects and gives to Rowan Helping Ministries as part of her high school senior project.

During the 2015-2016 swim season, the swim relay nights have collected 171 pounds of food donated to the Rowan Helping Ministries food pantry.

Tonight is relay race night at the J.F. Hurley YMCA in Salisbury.

Prior to tonight’s relay start, RACY will be hosting a free stroke clinic at 4:15 p.m. for youth who are interested in perfecting their technique and learning more about the RACY swim team.

Participants must be 8 years or older and able to swim 25 yards without stopping. Space is limited, so registration is strongly recommended by contacting Coach Hannah Hawkins at 912-531-5474.