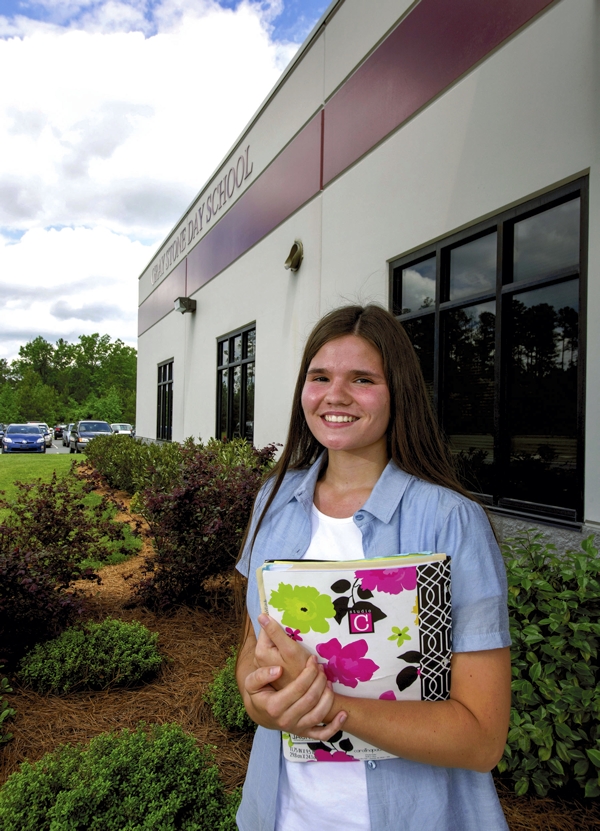 MISENHEIMER — Kristina Everhart, a senior at Gray Stone Day School, pushes herself hard, because she doesn’t want to waste the opportunities she’s been given. Kristina was adopted from a Russian orphanage when she was 3 years old.

Kristina doesn’t remember much about her life before she came to live with adoptive parents Vickey and Lanny Everhart in Gold Hill, but she does remember meeting them for the first time, and the first time she arrived at her new home.

Everything was different from what she was used to, she remembers. At the time, her new father had a deer head hanging on the wall. Kristina said when she saw it, she ran out of the house screaming.

For Kristina, getting adopted was “like a new start to life,” and she’s been determined to make the most of it. She pushes herself academically, striving to get good grades and excel.

“’I’ve really enjoyed this opportunity that I’ve had to actually have a successful life,” she said, “Because the situation that I was in, I could not have the opportunities that I have here.”

Kristina’s parents saw her face in an advertisement in a paper, and her mom, struck by her resemblance to a sister who died in a car wreck, felt drawn to her. At the same time, the Everharts heard of another child, a 4-year-old boy, Logan, who had just transferred from an orphanage in a different part of Russia. Logan had a lot of medical needs, from arthritis to an intestinal blockage that prevented him from properly absorbing and digesting food.

The Everharts adopted Logan at the same time as Kristina. Kristina said those first few years were spent in hospitals as Logan underwent treatment and surgeries. Kristina said those days are a blur of being taken home late at night, or staying with her new aunt and uncle while her parents stayed at the hospital.

At one point, she said, her family teetered on the edge of bankruptcy from medical costs, and would have fallen if not for the help they received from the community.

“It was difficult for our family . . . and my family’s definitely struggled to recover from that,” she said.

Logan has “come a long way” and his health has improved, but the time left a mark on her family. When Kristina started looking into colleges her junior year, she realized that there was no way for her family to pay for it.

So she cracked down and began applying for scholarships. As of now, she thinks she’ll have her tuition at Pfeiffer University covered for the first three years.

Kristina plans to major in nursing at Pfeiffer, and hopes to become a nurse practitioner or nurse anesthetist. It’s a career choice that’s inspired, in part, by Logan.

This year, Kristina and Logan are both graduating from high school. Logan, who was home schooled, will have a small ceremony at the family’s church, and Kristina said he’s very interested in gemology.

As for Kristina, she hopes she can make her parents proud.

“They gave me this opportunity to have this life,” she said.

And she wants to make the most of it.