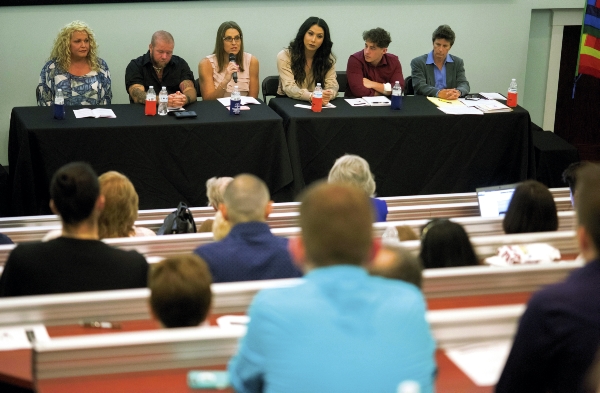 SALISBURY — Salisbury was able to learn more about members of the transgender community at Thursday’s Trans Conversations Educational Forum.

Close to 90 people attended the event at the Salisbury Business Center.

Rev. Margaret Almeida, pastor of Second Presbyterian Church in Salisbury, moderated the event. Panelists were asked seven questions, ranging from the legal implications of House Bill 2 to what support the community needed.

Before the panelists started asking questions, Tamara Sheffield, president of Salisbury Pride, reminded the audience that the forum was not a debate on HB 2 or an attempt at changing people’s mindsets.

“This is an opportunity to meet peacefully, providing education and insight,” she said.

One of the first things asked of the panelists was for them to tell their story and let the audience know something that a short biographical paragraph could not portray.

Many of the trans men and women shared that they knew they were different from a young age.

Kassandra is a Latina woman who was born in California and raised in Charlotte. She said when she was around 8 years old, she used to run into the woods and cry.

She said she began her transition into a woman when she was 17 and found that her grandmother was very supportive.

“She said, ‘If you do this, you do it right … you don’t want to be nobody’s clown,’” Kassandra recalled.

Connie Vetter, a LGBT law attorney, was asked about the legal implications of HB 2, a North Carolina law that, among other things, requires that individuals go to the restroom that matches the gender on their birth certificate.

But it is more than that, Vetter said. She gave an example of how parents can no longer take their child into the bathroom with them if the child is of the opposite sex and over the age of 7. She also mentioned how employees now must file discrimination lawsuits at the federal level instead of the state level and that the state is losing business.

“This whole law affects all of us in the state,” she said.

Two of the panelists were asked about how the relationships they had before, during and after their gender transition.

Erica Lachowitz has been an information systems strategist, project manager and has also worked in technology. She said telling loved ones about one’s decision to transition can be difficult.

“I’ve watched people who loved me at one point turn their back on me,” she said.

She said she used to spend a lot of time watching the way men walked and acted so that she could imitate their actions.

“You’re still the same person … But what I’m not going to be is fake anymore,” she said.

Mac McLaughlin owns his own dog grooming business and is also a performer. He said he had to be patient with his family because, like him, they were also transitioning.

“Be patient with your sons, your daughters, your relatives, your friends if they are transitioning,” he said. “Everybody needs to be patient with each other and show some grace to each other.”

One of the last questions asked was what the transgender community needed in terms of support.

Jamie Monroe, an entertainer and activist from Salisbury, said she would like to see school counselors educated on how to deal with transgender children and children who may be questioning their gender identity. She said there are some counselors who end up blaming the child for what they are going through.

“I want them to embrace trans children,” she said.

Adam Plant, a recent graduate of Wake Forest University School of Divinity, said there is a need for people to acknowledge that transgender people exist and matter, and also a need for compassion.

“I think that there exists a need for people to see us, and that’s what you’ve done tonight and I thank you for it,” he said.

Audience members were able to write down questions to be asked of the panelists.

One audience member asked if Caitlyn Jenner, gaining attention last year for her transition, hurt or helped the cause.

McLaughlin said he appreciates transgender celebrities like Jenner and Laverne Cox, known for her role as Sophia Burset on the Netflix show “Orange is the New Black,” because they start a dialogue.

“Once we start getting talked about, that gives us an opportunity then to educate,” he said.

For questions that the panelists did not have time to answer, Sheffield said they would be researched and answered on Salisbury Pride’s Facebook page and website.

Jynsen Holland, an audience member from Chapel Hill, learned about the event through Facebook. Holland enjoyed the discussion and said the right questions were asked, “especially the ones that really keyed into we just need to create a community of humanity.”

Holland was also happy to hear the panelists talk about non-binary people, who do not necessary look male or female at the end of their transition.

Bethany Slamon, Holland’s friend from Winston-Salem, said they wanted to start a support group that would include transgender people, allies, those transitioning and those who are questioning their identity.

“We just came to gain a better perspective on that,” Slamon said.

Sheffield said she did not know what to expect with the forum, so she was “over the moon” with the amount of people who attended. She thanked all of the event’s supporters, especially Tara Van Geons, a Salisbury Pride Board of Directors member who Sheffield said was instrumental in making the event a success.

“I hope that regardless of how anyone identifies, I hope they leave and go out in the world tomorrow identifying as their true and genuine self,” she said, “because these folks have really had to fight to be their true genuine selves and I think they’ve all set an amazing example.”