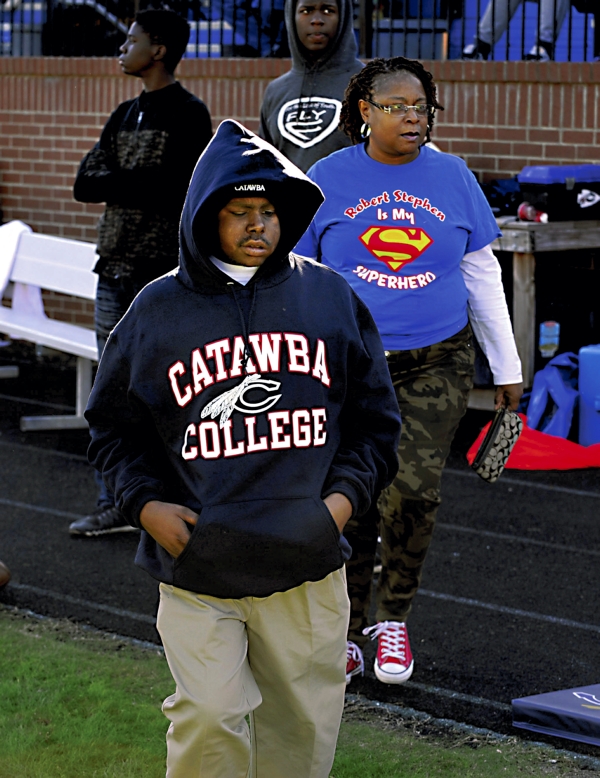 FILE PHOTO Robert Gilmore and his mother Wendy Baskins on the sidelin at a Catawba College game. photo by Wayne Hinshaw, for the Salisbury Post

Graduation 2016: Robert Stephen Gilmore will not be forgotten

SALISBURY — The late Robert Stephen Gilmore was passionate about his education and his school. The 19-year-old Salisbury High School student graduated early on Feb. 11, and passed away on Feb. 14 after a nearly lifelong battle with cancer.

His mother, Wendy Baskins, said two things kept him going, his faith in God, and the Carolina Panthers. Baskins remembered when Stephen was 3 and received his first diagnosis – a brain tumor – he told her it would be all right.

“He fought hard, and there were times where it would just get too hard,” Baskins said.

And even though he loved his education, there were times he almost gave up. Baskins said Stephen was moved to South Rowan High School because of his hearing loss. Separated from everyone he knew and the students who mentored him all his life, Stephen told her he thought about dropping out.

Baskins got him transferred back to Salisbury High in his junior year, and said the move returned his fire.

“He started to dream again,” she said.

Stephen was diagnosed with colon cancer when he was 15 and wanted to be a police officer or a physical trainer. He was very involved with his school and the community. He was named prom king at Salisbury High in 2015, awarded the first ever Courage Award by the Rowan-Salisbury Board of Education, was the manager for the Salisbury High Hornets, served as an honorary captain for North Carolina Central University’s football team and was an honorary coach for Catawba College’s football team.

Robbie Bergstone, a senior at Salisbury High and member of the school’s football team, said Stephen tried to be at games as often as he could. Stephen had to leave school in October 2015, after his cancer came back, but Bergstone said he would still try to make it to school games.

“It always gave us kind of that little jolt. … It just kind of motivated you to go the extra mile,” he said.

Tarik Woods, student body president, said Stephen was always smiling and interested in those around him. Even when he was in the hospital, Stephen would keep tabs on his classmates on social media, and would post videos to Facebook of himself dancing or dabbing.

As the Panthers made their run to the Super Bowl, Baskins said, Stephen’s condition seemed to improve — he even came back from the brink a few times, when doctors had given him hours or days.

And once he was back at Salisbury High, he didn’t give up on school or his dreams.

“He just had an old man’s wisdom that drove him to do well in whatever he did,” she said.

When the school offered an early graduation, she remembered, Stephen wasn’t content to graduate until he’d completed his senior profile. Stephen’s graduation, held at Brenner Childrens’ Hospital, was standing room only.

“It was just an amazing day,” Baskins said.

For his fellow students, Stephen’s legacy is one of school pride.

“A lot of people in the community don’t believe in this school, but Robert kinda showed them that there is a reason,” Bergstone said.

Baskins hopes that his peers – and the community – will take another lesson from Stephen’s fight: tenacity.