Graduation 2016: History of trouble turned around at Henderson 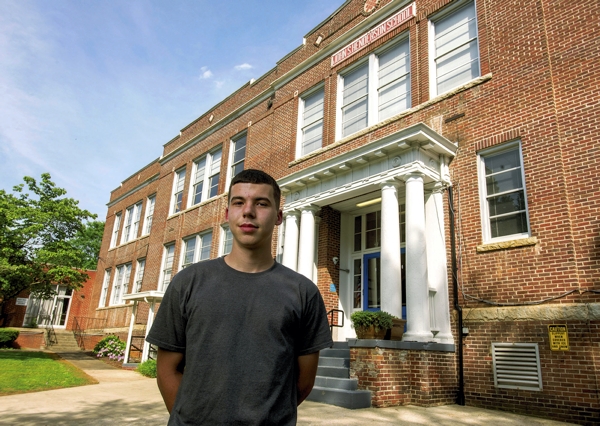 JON C. LAKEY / SALISBURY POST Chris Keller has struggled his whole school career with a copious amount of decisions that lead to him spending time in the criminal justice system. Keller, with the support of the teachers and mentors at Henderson Independent School is set to graduate.

SALISBURY — Christopher Keller said he was arrested for the first time when he was 13 or 14. At 15, he was transferred to Henderson Independent High School after he got into an altercation with a teacher at Salisbury High School.

“I basically let the anger get the best of me,” he said.

For Keller, now a senior, life was full of pressure. His father, Larry, suffers from bladder cancer, and his mother, Connie, has had multiple neck and back surgeries.

“I basically felt that I had to do a lot on my own,” he said.

Warnings from concerned family members about his behavior and the consequences of his actions “went in one ear and out the other.” And when he got into to trouble with the law, he said, it just kept happening.

He would be on probation, paying probation fines and dealing with court on top of school and his home life. The pressure made him crack.

In 2014, Keller was expelled from Salisbury High School one week shy of summer break. The next fall, he started school at Henderson. He’d heard a lot of mixed things about Henderson – that it was a school for “the bad kids.” But other people called Henderson “a school for second chances.”

And that’s what he got.

His altercation at Salisbury landed him with five charges, including assault against a government official, and Keller spent the summer in and out of counseling and court.

When he arrived at Henderson, the staff continued to help him work on his problems. He said he felt that they cared about him, and genuinely wanted to help. They took the time to learn students’ triggers, and the small class sizes helped them hone in on a student’s learning style.

“They give you more chances, you know what I’m saying, they let you have a chance,” he said.

But things still weren’t easy. Keller said he still got into trouble, and while he was at Henderson he got in trouble again, and found himself in jail, facing adult charges. It was the second time he’d been in jail, and this time, he realized that if he didn’t change, he wouldn’t have a future.

“Once you get locked up it gives you time to think about yourself,” he said.

Keller said he made a decision to “make a stand,” and focused on not letting people make him angry. When someone makes you angry, he said, “They win, you lose.”

A year later, Keller describes himself as a “self-made man.” He finished all of his credits in January, and will receive his high school diploma on June 11. He said he never really thought he’d make it, and knows that if it hadn’t been for Henderson, he probably wouldn’t have.

He was also motivated to succeed from home. His parents were supportive of his education.

“’I’m not going to leave until you graduate,’” he teared up, recalling their words. “It gets into your heart.”

Now, when he tells people he’s graduating from high school, those who know him smile and cheer him on.

“When you see other people smile because of what you did it makes you want to become a better person,” he said.

Keller will be the first member of his immediate family to graduate from high school. He’s excited, but nervous. He knows that graduating means a lot of responsibility will fall on him. It’s bittersweet.

Keller has a job at Il Colosseo in Salisbury, and said he doesn’t have any immediate plans after graduating.

“I have no idea what the future has planned for me,” he said.

But he hopes that, whatever it is, it will help him succeed. And for other kids, who were like him and struggling with anger, the criminal justice system or other issues, Keller said he wanted to let them know that the past is the past, and you can’t take it back.

“The only thing you can change is your future,” he said.