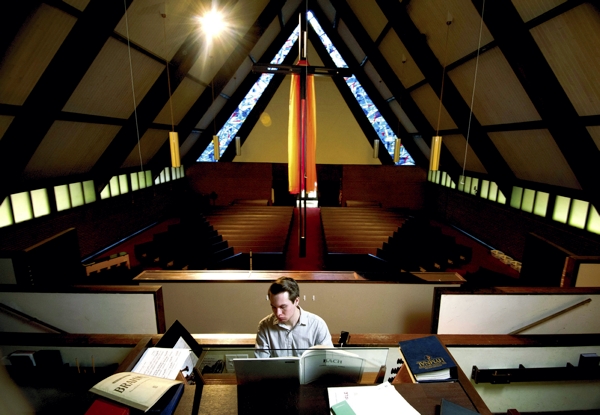 “I remember being a little tiny kid and sitting in church and listening to the organ. I mean it’s just something that I’ve always known about,” he said.

Wright has always had a passion for it, but he’s only been playing it for four years. Before that, he said, he played piano. He picked it up out of curiosity at the beginning of high school, studying with Philip Burgess, director of choral music at Catawba. The two instruments may seem similar, but they come from different families – organs are wind instruments, while pianos are percussive instruments.

It means that organ players have to be very conscious of the attack and release of notes.

For a while, Wright said, playing the organ was just something he did; but one summer he attended a study program at the University of Michigan. Meeting and interacting with other organists inspired him and made him think about how playing the organ would fit into his future.

“Because I actually met people my age and older … that were interested in that, and realized that that’s what I want to do with my life — perform,” he said.

It became a true passion. The organ offers endless opportunities for Wright to grow and stretch as a musician — and that’s what he loves about it.

Wright has worked as the organist and music director at Milford Hills United Methodist Church since January 2015, and said most days he can be found there practicing.

While there’s a lot more to the organ than church music, he said, that is a large part of its history.

When it came time to look at colleges, Wright turned his sights on music schools. Schools with good organ programs that were also in a part of the country that interested him proved to be few. Wright said he wanted to move to the Northeast, and set his focus there.

He settled on two schools: the Eastman School of Music and Julliard.

He auditioned at both schools in the same week, traveling first to Rochester, N.Y., and then to New York City. He called the audition at Julliard “intensive” — the most nerve wracking part wasn’t the audition itself, but the hour he had to practice beforehand. When you’re dealing with an instrument as complicated as the organ, an hour doesn’t stretch far between set up, getting used to a new instrument and practicing the piece itself.

But the actual audition was simple — if the judges don’t like your music, they won’t admit you as a student.

“If they don’t admit you as a student it’s probably not somewhere you should go in the first place,” he said.

Wright was accepted into both schools. Julliard awarded him the Kovner Fellowship, a prestigious award that would cover Wright’s tuition, room and board, transportation costs and give him an open door to the New York City music and arts scene.

But Wright turned it down, choosing a solid education over the Big Apple.

Wright said since its founding, Eastman has been “the place to go” for aspiring organists. The conservatory style set up will provide him with intensive study in the field of organ, and he’ll be mentoring under world-renowned performers.

The school also has the second largest music library in the world, next to Oxford University, he said.

He said he doesn’t have any strong goals or dreams beyond performing; for now, that’s enough. The feeling of pulling off a performance after long hours of practice is what he loves — whether it’s in front of a congregation or on a stage.

“It’s rewarding, to spend so much time practicing and things and then when you actually perform it you get to actually see the finished result and be rewarded by it,” he said.