Graduation 2016: West Rowan student dropped out, then came back 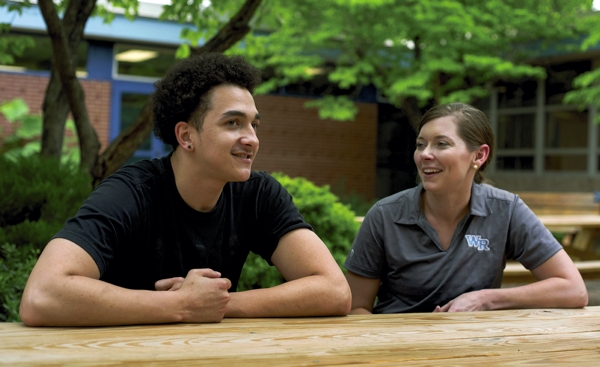 MOUNT ULLA — Andre Reid was just a little over a month shy of graduation when he dropped out. West Rowan High School had changed its attendance policy for the 2014-2015 school year, and Reid knew he’d missed too many days; he’d never walk. So he left.

“I didn’t really have a lot of motivation,” he said.

While Andre made his peace, he said his mom wasn’t pleased with his decision.

“She wasn’t happy … but she wasn’t going to kick me to the curb because I dropped out. I’m glad she was with me on it,” he said.

Andre’s mom told him he needed to get a job, go back to school, or find somewhere else to live. Reid bought a car, and began looking for a job. It was then that he ran into a problem. Every interviewer asked him if he had a high school diploma. When Reid said he didn’t, it didn’t “look too good.”

“You can’t really do much, you have to have a high school diploma or a GED,” he said.

After a month of looking, Andre landed a job at McDonald’s as a “grill master.” He was hired on the spot. He worked every day cooking meat — as well as working the fryer if someone skipped out — but despite sometimes covering two positions, he only made $7.25 an hour. Once gas and car insurance were paid, there wasn’t much left of his biweekly paycheck.

Working on the grill was hard on Andre’s skin, and he shows off small burn marks on his arm from his time in the fast food industry.

“Well, if I don’t get a high school diploma, I probably won’t get anything better than this,” he remembers thinking.

After five months, Andre threw in the towel and quit McDonald’s. By then, school was already back in session, but Reid was determined to make it work. He started classes again in January.

“I’m taking it a little more serious than I did last year,” he said.

Andre only had a few credits to complete, and managed to make up several classes with an online credit recovery program.

But things are different, now. All of Andre’s friends graduated last June, and he said he’s found it hard to reconnect with other students at the school. Most days, he skips lunch, grabs a bag of chips and goes to a quiet classroom. But Andre said he didn’t come back to school to socialize or make friends – he came back for himself.

“In the long run, what’s more important, you know? I just had to suck it up,” he said.

And he has found a few bright spots, as well. After he “spit some game,” Andre has a girlfriend, and the two attended West Rowan’s prom. They practiced dancing together, and Andre rented a tuxedo from Salisbury’s Thread Shed.

“I’ve never really done anything like that,” he said.

On June 11, he’ll also earn a diploma from West Rowan High School – just like his father and other members of his family.

“I feel like that’s part of the family tree,” he said.

But there is something that’s worrying him. Andre has a younger brother who dropped out of school when he did, who was hired by McDonald’s at the same time, and quit at the same time. Reid was hoping his brother would follow him back to school, as well, but that hasn’t happened.

“I don’t know what could motivate him to do better or to do more,” he said.

His brother is looking at GED programs, but Andre is trying to convince him to go back to school. For his brother, and others who might be “in the same boat, or thinking about it,” Andre hopes his story can inspire them to stay in school – or return, if they need to.

“It will benefit you in the long run,” he said.

After graduation, Andre is thinking about getting a certification in HVAC, and is looking at the program at Rowan-Cabarrus Community College. Or, he may follow his girlfriend to her college town and go to school there. Either way, for Andre, the future is bright.

“However it’s gonna go, I’m looking forward to it,” he said.