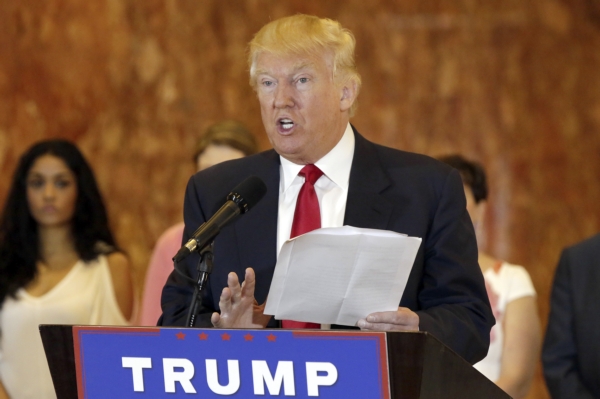 “Donald Trump on Tuesday announced he’d given away the last $1.5 million that other donors had entrusted to him four months earlier, when Trump held a televised benefit for veterans’ charities.

“But, at the same time, Trump blasted the news media – in terms that were bitter, even for him – for asking about how, and when, he was going to give this money away.”

One reason he may have freaked out was that he was caught lying and using vets for his own political ends. Recall that he staged a veterans fundraiser on Jan. 28, widely interpreted as an excuse to get out of a moderated Fox News debate. He claimed to have raised $6 million but for months could not substantiate whether the money was actually given over. “More than a week ago, Trump’s campaign manager said that Trump had already given out his $1 million in personal gifts,” The Post reports. “As it turned out, he had not. Trump made his $1 million donation the evening of May 23, after a day of inquiries on Twitter – Trump’s preferred social-media platform – by The Washington Post.”

The Associated Press reports: “Phone calls to all 41 of the groups by The Associated Press brought more than two-dozen responses Tuesday. About half reported checks from Trump within the past week, typically dated May 24, the day The Washington Post published a story questioning whether he had distributed all of the money.”

If The Post had not caught Trump, would he ever have given the money? We won’t know, but we did learn (or re-learn) several things about Trump.

For starters, we know that Trump will distort and out-and-out lie about his finances. It behooves the press and his opponents to continue to insist that he release tax returns. If they don’t succeed, it is up to the delegates at the Republican convention in July to force the issue.

If the vet charity incident is any guide, the returns will show that things are not as Trump portrays them. Maybe, given that The Post was not bird-dogging him at the time, he did not give very much (anything?) in charity over the years. (We’ve noted other possibilities, including avoidance of any tax liabilities, or less income than advertised or disclosed to financial institutions and foreign entanglements.) It cannot be said too many times that the most unreliable indicator of Trump’s business record and finances is Trump. (The New York Times reports that a deal with Hong Kong money men portrayed as a big win for Trump was actually a losing proposition following prolonged litigation.)

The next lesson is that Trump has a rotten poker face. When something gets under his skin – a press inquiry or an announcement of a potential third candidate – he attacks. And because he is so thin-skinned, many things and people get under his skin (e.g. British Prime Minister David Cameron, New Mexico Gov. Susana Martinez, Weekly Standard editor Bill Kristol, recalcitrant Republicans). He regularly attacks a lot of people. That should tell critics when they score a hit. Moreover, it should concern voters that in negotiations with far more at stake than a building, he would likely let his emotions get the best of him and reveal his weak points. We’ve already seen how mild criticism (from Cameron) or generic praise (Vladimir Putin) can dramatically affect his thinking. It is always all about him.

Finally, what kind of billionaire promises to give money to vets and doesn’t?! I mean, really. We don’t expect our presidents to be angels, but some basic level of decency and candor has until now been a requirement for high office. The difference between Clinton and Trump, I suppose, is that Clinton makes huge displays of generosity (with the Clinton Foundation) and uses that to justify self-dealing or rule-breaking, while Trump wouldn’t turn over the money until trapped. In an era in which voters seem determined to feel victimized and show an inordinate interest in grabbing from others (e.g. Wall Street, immigrants, China) what they think has been unjustly “stolen,” maybe they no longer care about a president’s moral core. They simply want the kleptomaniacs working for them.

The saddest part of this election may in fact be the revelation that voters are as bad as the politicians. It’s every man for himself, unless caught, at which point, one responds by hollering loudly and playing the victim. We certainly are getting the politicians we deserve.