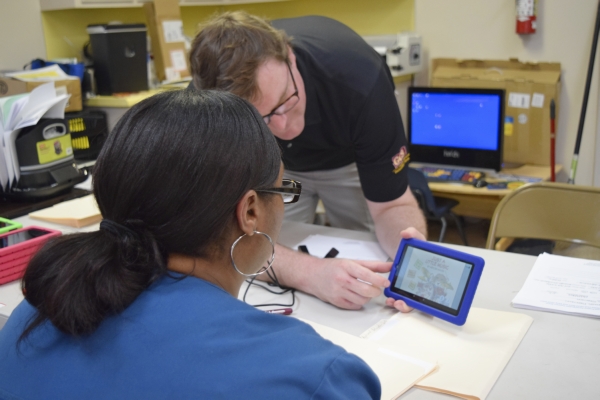 SALISBURY — The difference between an at-risk child and their more advantaged peers is one of words, said Greg Alcorn, CEO of GCS Agents and founder of Appleseed.

Children from advantaged homes often have exposure to books and reading time with parents, and are able to build a larger vocabulary earlier. It’s a simple opportunity that’s often denied to at-risk children.

“And that never changes, they never catch up,” Alcorn said.

That literacy gap can have a profound impact on the life of a child, affecting their grades, their career and their future.

“It ain’t fair,” Alcorn said, “so let’s make it fair. Let’s make it an even playing field.”

That desire is what inspired Alcorn to launch Appleseed, a privately funded pilot program that works to expose at-risk children to books and literacy tools to help them be kindergarten-ready.

And it’s done with a tablet.

Alcorn said he wanted to do something that had a generational impact, and after a lot of research, he chose literacy – and he chose to start it at home, in Salisbury.

“They could have picked anyone, but they picked little old us,” Jalica Stewart, center director of Wiley Lash Head Start, said.

Parents of children at the Wiley Lash signed up, and swung by Thursday to pick up their tablets. Erik Lipscomb, project manager for Appleseed, handed out the devices and walked parents through a quick tutorial before sending them home.

Children participating in Appleseed range from infants to 4-year-olds, and each tablet comes pre-loaded with age-appropriate books and literacy apps.

Lipscomb said that the tablets have been stripped down and rebuilt, and have WiFi and other services disabled.

In exchange for an agreement that Appleseed can monitor usage data, parents who signed up for the soft-launch of the program receive one tablet per pre-kindergarten child, along with a charger.

“A while ago it was, ‘Tablets are bad for children,’ but now we have a lot of numbers that show that tablets are beneficial educationally,” Alcorn said.

Tablets were recently approved by the American Association of Pediatrics.

The books are interactive, and encourage parental involvement.

“This is a program for parents and children . . . it’s an interactive program,” Stewart said.

The books also have an audio option, so that children can have books read to them if their parents aren’t around, or if their parents speak a language other than English – books and apps in Spanish are also loaded on the tablets.

The goal is not just to have children age-proficient by kindergarten, but to help students pass the “all-important” third grade reading test.

“They build prisons based on third grade reading,” Alcorn said.

By the time remediation starts in third grade – or even in kindergarten – it’s too late.

“If you’re a year behind, it takes two years to catch up,” Alcorn said.

If it works, the devices will pay for themselves through a reduction in remediation and summer classes.

Over the next six months, Appleseed will be monitoring usage data among the 55 children. The data will be compared to each child’s learning at Head Start. Lipscomb said the tablets can be brought in and synched to acquire data and to load new content, or that information can be acquired remotely through back doors built into all the devices.

Alcorn said if the data proves out, they have plans to take Appleseed global.

“It’s not the silver bullet, but it’s a shiny one,” he said.