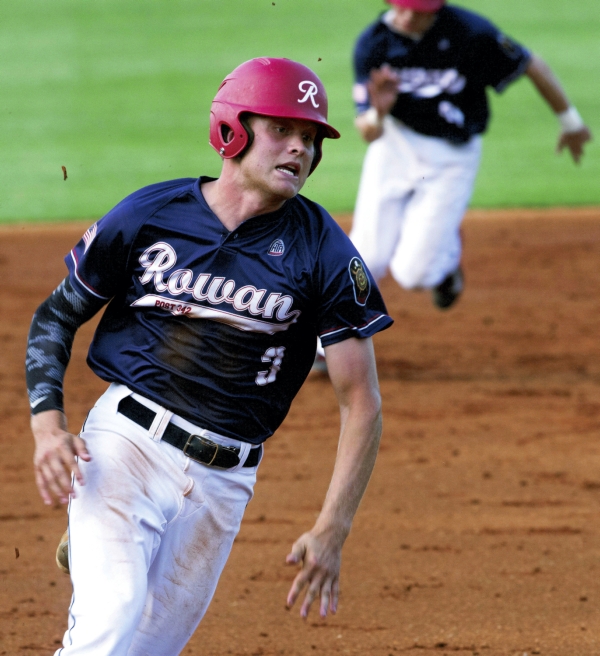 JON C. LAKEY / SALISBURY POST Rowan County’s Lee Poteat races toward third base and then on to home to score a run during Wednesday night’s game against Kannapolis at Newman Park. Rowan won the game, 14-4.

SALISBURY — Rowan American Legion Coach Jim Gantt considers his rightfielder, Lee Poteat, to be a throwback kind of player who plays the game the right way.

“Lee absolutely plays hard until it’s over,” Gantt said after Rowan’s impressive 14-4 win over Kannapolis Post 115 last night at Newman Park. “That is the way he plays all the time. He doesn’t know another way. There are not many guys like that left.”

Poteat used his aggressive skills to assure that Rowan (4-3, 1-0) won their Area III league opener by posting a 4-for-5 night at the plate, stealing a base, gunning down a Kannapolis runner at the plate from right field in the sixth inning and scoring  two runs.

It was Poteat’s second run that meant the most as he capped off a five-run eighth by scrambling home on a short sacrifice fly to end the game by the 10-run mercy rule. Post 115 fell to 2-5 overall, 0-2 in the Southern Division of Area III.

“I was on a steady walk toward home after I tagged,” Poteat said of the final play. “The centerfielder wasn’t making a real effort to throw it in, so I just took off and scored. The coach had just told me to read the throw.”

Rowan entered the decisive bottom of the eighth leading, 9-4, and greeted Kannapolis reliever with singles by Hunter Shepherd, Juan Garcia and a walk to Brandon Walton to load the bases. Catcher Jake Pritchard then singled to short left to make it 10-4 and bring Poteat to the plate. The West Rowan senior slapped a sharp single to left that got past Casey Ritchie and allowed three runs to race home. With Poteat at third and no outs, Brett Graham hit a fly ball to shallow center that ordinarily would not be deep enough for a sacrifice fly.

Poteat, was not the only standout for Rowan last night as the team pounded out 18 hits off three Kannapolis hurlers and played error-free defense, Rowan also turned again to their effective 1-2 punch of lefty Bryan Ketchie and righty Sawyer Strickland on the mound as they held Post 115 in check over the final four innings to gradually pull away.

Ketchie went 5 and 2/3 innings to improve to 2-0 on the season as he scattered five hits and struck out two. “I am not a strike out pitcher so I just try to mix it up and make good pitches,” Ketchie said. “Jake Pritchard did a good job behind the plate tonight calling pitches and our defense was just outstanding.”

Strickland, the Cabarrus Stallion right hander, pitched the final 2.1 innings, holding Kannapolis scoreless the final two innings. Kannapolis Post 115 ace Alex Rodriguez kept his team close into the fourth but a trio of base hits by Shepherd, Garcia and Walton made it 6-3 and forced Coach Joe Hubbard to bring in lefty Blake Johnson (South Rowan).

“Alex and Blake did okay on the mound,” Hubbard said afterwards. “But Rowan just kept coming at us and put a lot of pressure on us the whole game. I felt like we were back on our heels the whole game. We also played a little sloppy tonight, not just errors, but the little things that add up in a game.”

Kannapolis actually took the first lead of the game when Bo Corriher  cranked a triple to deep center and scored on a sacrifice fly. in the second. Rowan responded with four hits in the bottom half and took a 2-1 lead as Seth Cauble drove a double over the center fielder’s head. After an unearned run by Rowan made it 3-1, Kannapolis used power to tie it as Hunter Travis doubled then AL Brown product Casey Ritchie lifted a two run homer to deep left to tie it, 3-3.

Rowan took a 6-3 lead in the fourth with three hits and a pair of walks then made it 8-3 in the fifth on a clutch two-run single to right by Hunter Shepherd. Kannapolis added one run in the sixth on three hits but had a potential big inning snuffed by Poteat’s frozen rope throw to the plate with two outs that nailed Cody Smith. Rowan added a single run in the bottom of the sixth for a 9-4 lead that stood until the decisive 8th.

“We did have some really good swings tonight for whatever reason,” Gantt said. “Because Rodriguez is a really good pitcher. But we hits some balls to the right spots early plus Ketchie just keeps them (Kannapolis) from doing a whole lot the way he pitched.”

Rowan’s hit parade was led by the middle of the order as Poteat had four singles while, Shepherd and Garcia had three hit nights. Kannapolis was led by Hunter Travis with three hits including a pair of doubles plus Ritchie with his big home run.

Rowan returns to division play tonight at Rich Park as they take on Mocksville-Davie. Kannapolis is off until Friday when they host Randolph County