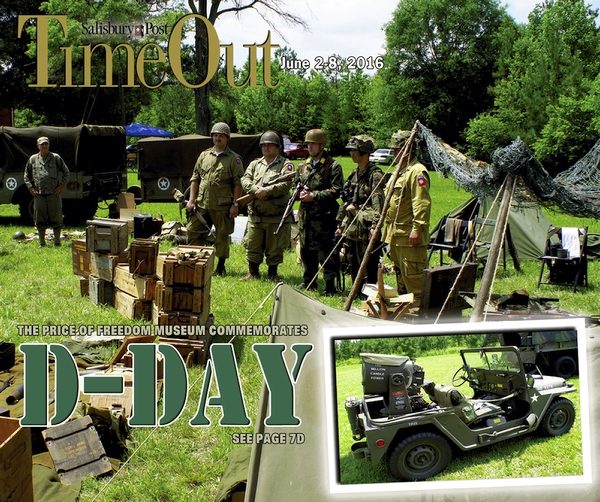 Photos by Joel Honeycutt /Salisbury Post A group of military reenactors from Charlotte with display of equipment used by soldiers during WWII. Inset: Vietnam era jeep owned by Bobby Harrison.

During World War II (1939-1945), the Battle of Normandy, which lasted from June to August 1944, resulted in the Allied liberation of Western Europe from Nazi Germany’s control. On June 6, 1944, also known as D-Day, more than 160,000 Allied troops landed on five beaches along a 50-mile stretch of the heavily fortified coast of France’s Normandy region. The invasion was one of the largest amphibious military assaults in history. More than 5,000 ships and 13,000 aircraft supported the D-Day invasion, and by day’s end, the Allies gained a foot-hold in Continental Europe. The Normandy landings have been called the beginning of the end of war in Europe.

CHINA GROVE — The Price of Freedom Museum, 2420 Weaver Road, will host its annual D-Day remembrance event on Saturday, June 4, from 9 a.m. to 3 p.m.

There will be a military ceremony at 10 a.m. with the National Anthem sung by Eva Millsaps.

There will be interactive military drills for children, as well as military vehicles on display, a “Ride of Pride” display, military weapons and war related memorabilia. Representatives from the Veterans Administration will be on hand to offer information and assistance to veterans.

The mission of the the Price of Freedom Museum is to honor all veterans of American wars. This is a joint event by the Museum and the Piedmont Military Vehicle Preservation Association.

Everthing is free except the food and drink concessions.

The museum itself will be open all day as well.

Note for MV owners and displayers: Friday is for arrival and setup. Saturday: Setup should be completed before 9 a.m.