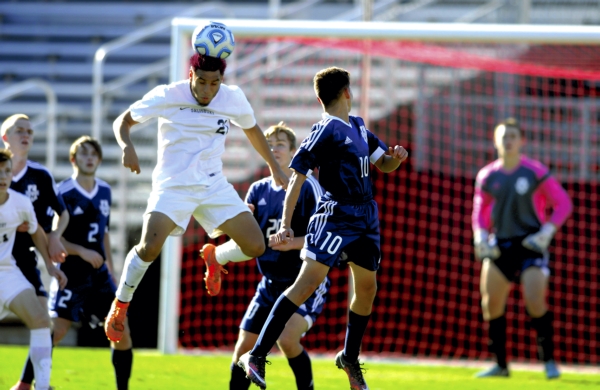 SALISBURY — Cristian Uribe’s greatest disappointment drove him to become a two-time all-state player.
As a sophomore, Uribe started for Salisbury’s soccer team in the 2013 state championship game against previously unbeaten First Flight, but an injury ended his day early — only 18 minutes in.
Bobby Cardelle and Emmy Turcios fueled Salisbury to a 2-1 victory, but Uribe could only watch from the sideline.
“I was glad the team won, but in my my mind, I didn’t feel like I’d won anything,” Uribe said. “But I got healthier and worked harder. I really got in shape.”
The injury on soccer’s big stage provided the motivation that propelled Uribe from solid to spectacular. His growth as a fitter, tougher player led to him signing this week with Division II UNC Pembroke.
“Cristian came back as a very different player his junior year,” Salisbury coach Matt Parrish said. “Leaner, faster, stronger, more athletic.”
A center back, Uribe was named to the North Carolina Coaches Association All-State team after a junior season in which Salisbury went 20-5. Then he returned for his senior year determined to do even more.
“My main goal was to get back to the state championship, and this time I wanted to feel like a champion,” Uribe said.
Uribe was the vocal and physical leader of a Salisbury defense that got fiercer as the season went on. The center back is like a baseball catcher — with the entire game in front of him —  and Uribe’s communication and leadership were instrumental in Salisbury piling up wins. He put his body on the line for his team every match.
“Cristian was not only a great defender, he made every guy on our team better,” Parrish said. “He reads the game so well. He’s always in the right spot at the right time. He’s tactically smart and technically flawless.”
Uribe even made his presence felt on the offensive end, picking his spots to join the attack and becoming very dangerous on headers off throw-ins by Joshua Lynch. Uribe scored 15 goals as a senior.
“Cristian is just so good in the air,” Parrish said. “And he didn’t get caught out of position. When the field flipped in a hurry, he was a guy who could sprint back quickly to anchor the defense.”
Salisbury got on a roll and won its last 25 games. The defense, led by Uribe, posted 17 shutouts. Eight of the Hornets’ last nine games were shutout victories.
In Salisbury’s overtime struggle with CATA, Uribe contributed a key goal. His header off a Lynch throw-in was deflected, but he was in the right spot at the right time to knock in the rebound.
In the West Regional final against Trinity, the 5-foot-10 Uribe, with the assistance of sharp passes by Landon Goodman and Lynch, scored the backbreaking second goal that triggered a 6-0 rout.
After the Trinity win, Uribe was back in the state championship game, and this time he got what he craved. He was a difference-maker — heading in another Lynch throw-in for the icebreaking goal in a 3-0 victory over Washington and the Hornets’ third state title in five years.
“His goal in the state championship game was the cornerstone of a great career,” Parrish said.
Uribe helped the Hornets extend their string of consecutive CCC titles to 12. He repeated on the All-State team for 2A public schools and was honored as CCC Co-Defensive Player of the Year. Along with Goodman, he was named to play in this summer’s East-West All-Star Game.
Uribe had college options and drew interest from Catawba, Limestone and Belmont Abbey as well as UNC Pembroke.
But Uribe liked everything about UNC Pembroke, where his roommate will be Carson standout Ricky Maldonado.
“UNC Pembroke is D-II, but it almost has a D-I feel to it,” Uribe said. “It’s kind of in the middle of nowhere, but the school is really nice. It’s going to be a good environment for school and for soccer. I’m signing late, but I wasn’t in a hurry. I wanted to wait as long as it took to make the right decision.”
Uribe plans to study business management. His freshman goal as far as soccer is to “play good minutes and get better every day.”
The UNC Pembroke program should get a boost. Last fall, the black-and-gold Braves were 5-8-2, and they went 1-6-2 against Peach Belt Conference opponents.
Uribe credits Parrish for helping him get recruited. Parrish credits Uribe for a lot of Salisbury’s success.
“He was one of the best center backs we’ve ever had,” Parrish said. “UNC Pembroke got a deal.”