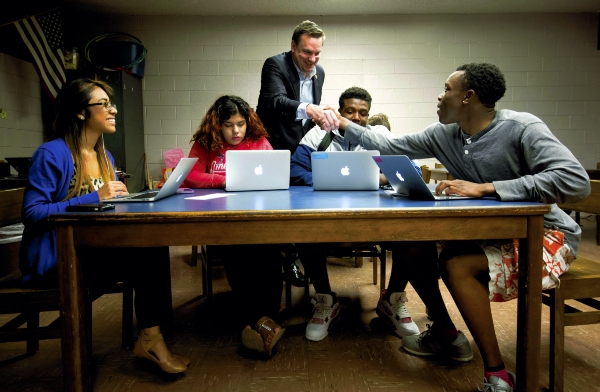 The Concord native said he tries to visit at least one school a month in the 8th Congressional District and was happy to be back in “God’s country.”

“I’ve heard about all the innovative things they’re doing here and came to see for myself,” he said of South Rowan.

He was intrigued by school’s use of collaborative spaces and personalized learning. Hudson’s mother was a public school teacher, so he has a “special appreciation” for teachers, he said.

Principal Kelly Withers said Hudson had been trying to arrange a visit for a while.

“He asked a couple times, and the schedules have never worked out.”

In the past few years, Withers said, the school has transformed its spaces with new furniture and design, creating comfortable areas that encourage and facilitate group work. Cozy chairs and tables fill most of the school’s media center, and a café occupies one corner.

“This is nothing like my high school,” Hudson said.

But Hudson also came to talk about the importance of voting. Withers said that many of the students at South Rowan are of voting age or “on the cusp” of being able to vote.

On June 7, the state will hold a special congressional primary. Hudson, who is running for a third term in the 8th District and faces challenger Tim D’Annunzio in the Republican primary, said that voter turnout is expected to be small.

He referenced the 13th Congressional District, where a total of 22 candidates — 17 Republicans and five Democrats — are running. The newly redrawn district includes all of Davie and Davidson counties and parts of Rowan, Iredell and Guilford counties. In the winner take-all primary, a candidate could win with just a handful of votes.

As Hudson sat and talked with students, he encouraged those who were able to get out and vote. He took a non-partisan approach to the topic, saying he didn’t care if people voted Republican or Democrat, as long as they registered and voted.

“I know, but that’s a lot of work,” said Yasmeka Howie, a senior in a U.S. History II class.

But Hudson said “government’s gonna happen,” no matter what, and encouraged Howie and other students to do their research, register and vote.

“One vote really does matter,” he said.

Withers said it was great that students had the opportunity to meet and talk to someone in government, and hopes that those who are eligible to vote, will.