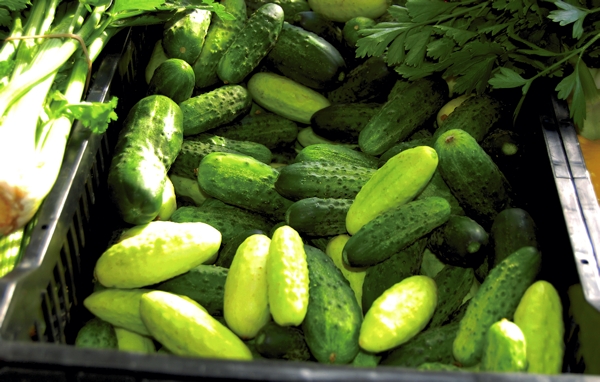 Deirdre Parker Smith/Salisbury Post Cucumbers this size are perfect for pickles, which can be canned in a variety of flavors and methods.

Time to start thinking about canning and freezing Farms and gardens are getting into the main part of the growing season, meaning you might want to figure out a way to preserve all that goodness for later in the year.

Toi Degree and Eric Bowen had some suggestions at the latest Learn.Act.Grow. at Rowan Public Library’s East Branch in Rockwell.

Degree, the consumer and family life agent for Rowan Cooperative Extension had a PowerPoint presentation on canning — what to can and how — and freezing — some foods hold up better with freezing.

Bowen, director of the Bread Riot food coop and manager of the Salisbury Rowan Farmers’ Market, offered tips on dehydrating foods, such as peppers and mushrooms or apples.

Degree had a lot of information, which she went over quickly. Handouts provided more details. But the simplest way to explain their advice is this —canning takes time and attention; freezing may take time, but it’s not something you have to watch. Dehydration may also take time, but it’s more of a set it and forget it process.

“You decide,” Degree said, “which is the best method for you. If you’ve got the time and want to can, go ahead, but many foods are actually better for you if they’re frozen.”

Since canning nearly always involves cooking what goes into the jar, some nutrients are lost, as well as texture. Degree recommends keeping canned foods no longer than 12 months.

Freezing typically uses quick methods, such as blanching, or no cooking at all. It retains the nutrients of many foods, although, again, the texture will change.

Of course, dehydration is simply removing water, so most nutrients stay put, and some foods benefit from the process, adding or concentrating flavors.

“My auntie, you know how she dried apples?” Degree asked. “Screen,” someone said. “That’s right, on a window screen set out in the sun, and then she put the dried apples in a pillowcase. She did make some good fried pies, but …”

Modern methods are faster and likely safer than what our grandmothers did.

“You cannot can is a mayonnaise jar or an old pickle jar,” Degree said. “Use those for something else. You need to use the Mason jars with the seals. And you can reuse the rings, but you cannot reuse the flat tops.”

A woman asked what happened to her strawberries, which she had canned with some simple syrup. “They turned brown. They tasted fine, though.”

No one had ever heard of canning strawberries. “Those, you freeze,” Degree said, “in a single layer on a cookie sheet.”

The key to any form of preservation is to start with fresh, high quality food. “Straight from the garden,” Degree said. Bowen added “straight from the Farers’ Market,” and reminded those there that foods that come from out of state have spent time being shipped, so they are not at their peak.

“That’s why the cantaloupe from Florida doesn’t last as long as the one from a local farm.”

How you store your food before preserving it is important, too. For short-term storage, Bowen reminded everyone tomatoes do not go in the refrigerator. Broccoli, cabbage and other cruciferous vegetables should be stored in a zippered plastic bag with the air squeezed out. The air will break down the sugars. Lettuces and tender greens should be washed, then dried in a salad spinner and put in a plastic bag with a paper towel to soak up some of the moisture. Tired lettuce can be revived in an ice water bath.

He said planning is key to have the best tasting, most nutritious food. First, find out what’s available, what’s in season, then plan meals around that ingredient. Only buy what you need, unless you plan to preserve it, and use it right away.

He answered a question from another woman, “Yes, the Farmers’ Market is there rain or shine.” He added that Bread Riot is trying to start a glean team to volunteer to harvest fruit and vegetables that are left behind. The food would be distributed to people who have little access to fresh food.

Degree said frozen food is the closest to fresh, “if you’ve done it correctly.”

Canning food kills bacteria, yeast and botulism. The air is driven out in a pressure canner, which will keep the water at 240 degrees. You can boil it all day in a water bath and it it will never get more than 220 degrees, she said.

The texture of the food changes in the process, as well as the color.

Degree said the time between picking a fresh fruit or vegetable to canning should be within 12 hours for the best results.

Canning takes time, washing and sterilizing the jars, preparing the lids and rings, heating the water in the canner, cooking the food — most food that is canned is cooked first.

“Canning jars are standardized. But if it has a chip or a crack, you’ve got to use it for something else, because the seal will not form.” Degree said.

Freezing does not sterilize food, if that’s what you’re looking for. And it doesn’t save food that’s going bad. “If it’s almost spoiled when you put it in the freezer, guess what? It’s the same when you thaw it out.”

Most frozen foods are cooked once thawed.

The key is to freeze quickly. If you’re planning to freezing a lot at one time, turn you freezer’s thermostat down to -10 degrees. If flash freezing single items, such as strawberries, keep the temperature at -10. It will freeze the food quickly and reduce the size of the ice crystals, leading to less texture change.

Store food at 0 degrees for the longest life — and use a thermometer to make sure the freezer is at the right temperature.

Squash slices and strawberries do well in flash freezing. This creates separate pieces that can be used in recipes, instead of a clump of fruit or vegetable.

Freezer burn is a possibility, especially if all the air has not been removed from a container, but it’s not dangerous. It just leaves a bad taste.

If you’re worried about killing microorganisms, consider blanching food before freezing. Blanching is putting the food in boiling water for just a few minutes, 3-5 at most, and quickly cooling in a mix of water and ice. Steaming works the same way. You know the vegetables are ready, especially things like broccoli and beans, when the color changes, in this case, bright green.

Degree likes to use freezer bags that can be stored more easily than rigid containers, but stackable freezer containers work well, too.

For fruits, use something with acid, like Fruit Fresh or lemon juice, or a sugary syrup to help prevent browning.

As in canning, frozen foods need a little space in the container to allow for expansion. “Label it. Date it,” Degree said. And use it within 12 months, as well. She provided a chart that showed freezer temperatures and how long food will last. The warmer your freezer, the less time your frozen food will remain tasty and fresh.

You can refreeze food that has thawed, but it will lose quality and texture.

Whatever you do, do not store home-canned goods in a garage. The extreme heat of summer will make your food spoil faster than you can eat it. Food needs to be kept in a cool, dry space, between 50 and 75 degrees.

Bowen talked about drying food, which requires heat, a controlled temperature, dry air and air circulation. “Drying inactivates bacteria, and the food weighs much less. Ten pounds of apples equals about a pound and a half dried.” Dried foods are easy to store, in plastic bags or in those recycled mayonnaise jars. If your drying method gets too hot, it will cook the food. Vegetables should be dried at 125 degrees, fruits at 135, and meats at 145.

Some foods store well simply in controlled conditions, such as sweet potatoes, pumpkins, Hubbard or acorn squash. “They may actually taste better after storage,” Bowen said. “The starches change to sugar.”

If you want to dehydrate foods, buy a quality dehydrator, Bowen advised. Get one that has stackable trays with a ring on the outside that aids in even air circulation. Cheap dehydrators will take much longer to dry the food or won’t dry it all.

Degree distributed several handouts that went into more detail about canning and freezing. She suggested checking with Cooperative Extension of questions. Both Degree and Bowen used information from Ball Corp., which makes the majority of canning equipment available, for help with recipes and guidelines.

As always, you can call Cooperative Extension for questions about food preservation. Degree can find information for you and explain things. She is also testing pressure canner lids each Tuesday in June and each Thursday in July at the Agriculture Center on Old Concord Road.