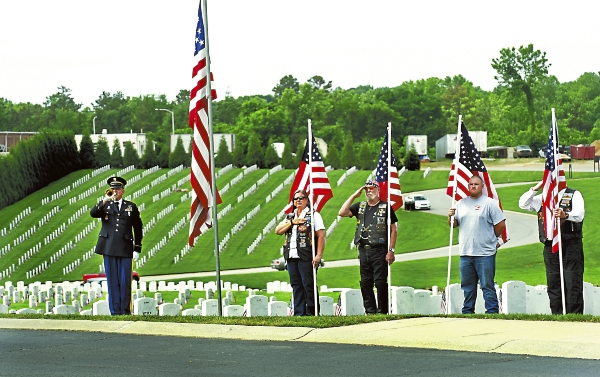 Sgt. Brett Miller, left, plays Taps while members of the Patriot Guard post flags at the 2016 Memorial Day ceremony at the VA National Cemetery. photo by Wayne Hinshaw, for the Salisbury Post 98=year=old Ross Giles from Salisbury stops at the grave of his wife Katherine at the VA National Cemetery. Both were veterans of the Marine Corps during WWII and the Korean War. They were married 65 years. photo by Wayne Hinshaw, for the Salisbury Post

He met his wife Katherine Giles while stationed in North Carolina and they were married for 65 years.

“They said those wartime marriages wouldn’t last, but ours sure did,” he said.

Giles fought in World War II and in the Korean Conflict as a Marine. His wife was a first sergeant in the Women’s Marine Corps.

He and his wife retired to Salisbury in 1983 and during that time they were both very involved in the community. Giles was on the Salisbury Planning Board, Rowan County Parks and Recreation Board and spent 10 years on the Rowan County Board of Elections.

Giles said the event brought back “pleasant memories” for him.

Jasper Edwards, director of the Salisbury National Cemetery, reminded the audience that it is tradition to place an American flag at every gravesite in the cemetery to remember those who lost their lives serving the United States.

“It’s because of them that we are free,” he said. “Because of them, today we’re able to enjoy not just freedom, barbecues, rifles, the right to bear arms, and also look at our loved ones and have a say in how everything is done in our country.”

The West Rowan ROTC performed the posting of the colors and Neal Wilkinson sang the National Anthem, among other patriotic songs.

Mayor Karen Alexander attended the event and read a proclamation to the crowd.

She said that the city appreciated and acknowledged the sacrifices made for the country’s freedom.

“(I) encourage all citizens to reflect on the uttermost sacrifice for freedom and demonstrate their thanks and gratitude for the many veterans who have so valiantly given their all to defend our cherished freedoms,” she said.

Joseph Laurer, acting associate director of the VA Medical Center, said people would be living in a very different America if it was not for those who served in the Armed Forces.

“The America we know would not be the same if it were not for the men and women who we honor on Memorial Day,” he said. “We owe an immense debt to these defenders, past and present, living and dead.”

Cecil Whitley was the event’s keynote speaker. Whitley was in the U.S. Army from 1967 to 1979 as a first lieutenant in the infantry, platoon leader and company commander in Vietnam. He was also a non-commissioned officer who achieved the rank of E-5 and went to Officer Candidate School. He served with the first Infantry Division and the 101st Airborne Division.

Whitley talked about the difficulties he faced coming back from the Vietnam War.

“It’s just really tough when you see young men dying in front of your own eyes and when you take human life and not being … received,” he said.

He said on a day like Memorial Day, he is reminded of the families who lost their loved ones in a war.

“For those who served, like me, there’s nothing better than looking up and seeing Old Glory still flying up there,” he said, drawing an “amen” from the audience.

Annie Miller Bates, who had and has multiple family members in the military, said she appreciated the support that the event signified.

“It means so much to me, to know that we are still loving each other,” she said.

Herman and Sylvia Price came from Hickory to attend. Herman served in Vietnam, and Sylvia said her husband can relate to what Whitley said in his speech. She said Herman did not even know if he wanted to wear his uniform in public.

Herman said they attended to show their respect.

“It’s just out of respect for people that have died for this country,” he said.

Many attendees visited the graves at the cemetery after the event, including Ross Giles and his daughter Sally Morris, who traveled from Maine to visit her father.

She said events like the one on Monday serve as a reminder of the people who sacrificed their lives serving in the Armed Forces.

“I just think this is important for awareness of people who gave their lives to protect mine,” she said.