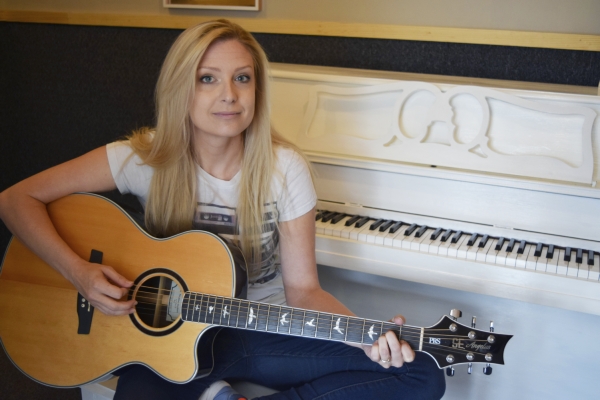 Jessica Mosher teaches guitar, piano and drums, but specializes in songwriting, herself. Mosher decided to set up shop in Spencer, where she lives with her husband, Jim. Rebecca Rider/Salisbury Post

SPENCER — Jessica Mosher and her husband Jim spent the better part of two years fixing up 123 Fifth St. in Spencer. Jim owned the building, which was set to be condemned, but Mosher said she saw promise in it.

“I didn’t want to let it go because I knew we could do something cool,” she said.

For the past several years, Mosher had been driving around the area giving music lessons, but decided that the building offered a good chance for her to have a hub for all her students.

After two years and a lot of work, the Nebulux Music School is set to open June 11, and Mosher can’t wait to get started. She said she got the name from watching “Cosmos” with Neil deGrasse Tyson.

“Nebulas are where stars are born,” Mosher said, “So I thought, ‘Ok, well that makes sense.’”

The school is small, with three classrooms specially designed for particular instruments. Students can attend Nebulux to learn piano, keys, guitar or drums. There’s also a booth for vocals. The school will also offer classes in music technology and songwriting.

And if a student goes beyond what she can teach, or wants to learn a specialty, Mosher has teachers who are on call.

“We’ve got it all covered,” she said.

The school is for all ages and levels of proficiency – from beginners to those who want to go pro. And Mosher said that, as a teacher, her goal is to foster creativity and to encourage students to forge their own paths.

“I feel like I give them the tool belt, and they go build what they want,” she said.

Mosher said she chose to keep the number of instruments down because she wanted to go with quality over quantity. In addition to the specially designed classrooms, the school also has sound tech for the music technology classes and Bluetooth technology so students can work with music directly from their phones.

Mosher said she’s been interested in music since she was a little kid, and she started singing when she was 14. She briefly attended the Berkley School of Music before choosing to work on her career. Mosher said she started teaching music a few years ago as a way to earn some extra pocket money, but she’s fallen in love with it. Still, a music school is a new adventure, and she doesn’t know who will turn up at her door.

“I don’t know what to expect from this area,” she said.