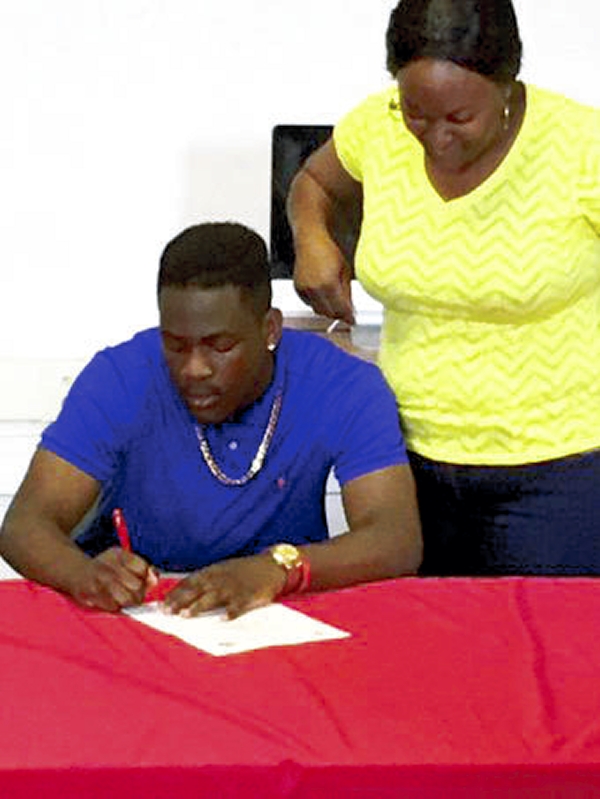 SALISBURY — When he was younger, some of his Salisbury High teachers thought Darius Jackson was a pretty good actor.
“They thought Darius was putting on a front, that no one could be that friendly and that positive,” Salisbury head football coach Ryan Crowder said with a laugh. “I had to tell them, ‘No, that’s just how he is all the time. He’s that nice. That’s who he is.’ ”
In time, everyone figured out Jackson, known as D-Jack, was the real deal — on the football field, on the wrestling mat, and in the classroom, where he’s on the straight-A honor roll.
“I’ve been coaching here 16 years, and I’ve never had a kid with higher character,” Crowder said. “I’ve never heard him say anything negative about a teammate. He’s going to do good things in college. He’s going to be a positive influence on everyone around him.”
Jackson’s athletic story will continue. His academic credentials led to acceptance by several colleges. The next challenge was finding a school where Jackson, who is 5-foot-10, 180 pounds, had a chance to make an impact in football as well as earn a degree.
Jackson chose North Carolina Wesleyan, a Division III school in Rocky Mount.
N.C. Wesleyan plays in the USA South Conference against schools such as Averett, Greensboro and Methodist. Jackson should have a chance to be a starter there, and it won’t be a shock if he becomes a standout.
“M.C. Wesleyan was one of the schools where I’d been accepted, and one of the assistant coaches (Aeon Blake) called me about coming up to visit the school and playing football,” Jackson said. “It’s a nice place. I felt right at home there.”
Jackson leaves wrestling behind but had a strong high school career. He was ranked as high as fourth in 2A in his weight class.
“I played football at 180 pounds and I wrestled at 160, so it was always tough to maintain my wrestling weight,” Jackson said. “I think making weight put me in a bad mood sometimes, but I liked having that tough wrestling mindset and I liked the competition. I was conference champion three times and I won a regional championship as a senior and wrestled in the state tournament. Wrestling helped me become a better football player and I’ll miss wrestling a lot, but football always was my first love.”
The Salisbury coaching staff envisioned Jackson as a running back early in his high school career, but they figured out he was best on the defensive side of the ball when he was a sophomore. Guys fast enough to cover receivers yet hard-nosed enough to tackle running backs are valuable commodities. Jackson proved to be one of those guys.
“They called me up to the varsity to play linebacker,” Jackson said. “It went from there. I played a lot of positions, wherever they needed me.”
Jackson enjoyed a breakout, All-Rowan County junior season. He recovered four fumbles and scored two defensive touchdowns.
One of those TDs was the signature play of his prep career. He took the ball away from a Surry Central back shortly before halftime and went 70 yards to score. That was the decisive moment that swung that first-round playoff game in Salisbury’s direction.
Jackson repeated on the all-county team as a senior. He’d gotten better, but opposing coaches were aware of him. That made it tougher to make plays.
“It was so frustrating because no one was coming my way,” Jackson said. “I wanted to make tackles, wanted to make plays, but a lot of times I had to trust my teammates to make them. I just had to be proud people were running to the other side of the field and look at it as respect.”
Crowder uses Jackson’s name in the same sentence as former Hornet star Darien Rankin, who played at North Carolina. Rankin was taller and more physically imposing than Jackson, but Jackson possesses the same sort of versatility.
“Darius is one of the best we’ve ever had at the ‘Hornet’ position,” Crowder said. “He could play the pass, he could play inside as a linebacker, and he was tough enough to play up on the line. He was one of those guys who could play well at any of the three levels of defense. He could just about take away a side of the field.”
N.C. Wesleyan was 5-5 last season, although the Battling Bishops were 5-2 in league play. Former Davie County High and Guilford player Jordan Farmer is on the coaching staff.
N.C. Wesleyan plays at 5,000-seat Bishop Stadium in the Rocky Mount Sports Complex, and the Battling Bishops will be entertaining 12-time national champion Mount Union (Ohio) on opening day of the 2016 season.
N.C. Wesleyan obviously likes challenges, so Jackson should fit right in.
Jackson told the friends and teammates who gathered for his signing celebration last week: “I hope this won’t be the last time you hear my name called out.”
Chances are good that it won’t be.