Wayne Hinshaw: A visit to the World of Coca Cola 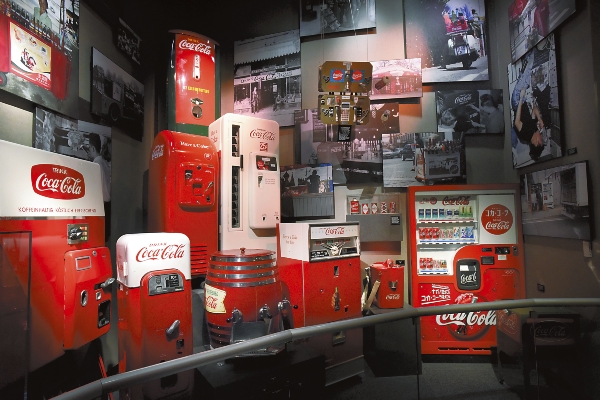 A display of the many vending machines used through the years to serve Coca Cola. The ‘World of Coca Cola’ is located in Pemberton Place in downtown Atlanta. Wayne Hinshaw/For the Salisbury Post

ATLANTA —This world is truly the world of Coca Cola. A company brand name that is known world wide having created formulas for some 500 beverages around the globe has gathered all the fruits of their creative genius in the “World of Coca Cola” building at Pemberton Place in downtown Atlanta, Georgia.

The building is a shrine to the Coca Cola empire, proudly exhibiting its accomplishments in advertising, marketing, promoting, and the results of products accepted worldwide. It is much like a history museum filled with artifacts of Coca Cola in signage, posters, paintings, and products.

The vintage adverting signage of the company has been displayed in food diners, sundries, appliance and TV service shops, grills, athletic scoreboards, clothes, and toys. In the Loft Section of the center hangs a bicycle with Cola Cola’s logo. Posters of famous athletes drinking Coca Cola, Victorian dressed ladies drinking Coke, women of fashion in the 1940s holding colas, and a 1950s-’60’s school crossing metal policeman with his hand raised warning of a school crossing zone (with Coca Cole painted on the his back) are all exhibited.  Remember the signs saying, “Soda fountain Coca Cola 5 Cents” or the more modern saying, “Live on the Coke side of life?” They are here.

John Pemberton invented the Coke formula in 1886. In 1896 until the early 1900s, the company gave porcelain syrup urns to any store that ordered 100 gallons of syrup in a year. One of the treasured urns is displayed.

A complete 1880s soda fountain is for viewing as is a bright yellow, 1939 Argentinian Coke delivery truck, and an original Coke bottle collection from each state. The much recognized, contoured Coke bottle we know today was introduced in 1916 and has remained an icon. Prior to the contoured bottle of today, most every state had a different-shaped bottle. The North Carolina bottle was even dark brown glass in color.

Most of us remember the uproar when Coke changed the drink formula after 99 years of success. The public was outraged. A section of the museum has giant headlines from newspapers in bold, colorful letters expressing the outrage. One such headline reads, “Can Science Unlock the Secret,” “Real Formula for Coca Cole.” Did Coke really make an enormous mistake in changing the formula or was it a great publicity hoax to get a burst of free advertising worldwide?

The center has a bank-type vault in the museum that they say holds the real secret formula. They even provide a photographer to take your photo standing in front of the vault, if you chose to purchase one.  There is a lot of excitement about the secret formula locked in the vault. Good marketing keeping the mystery alive?

About every style of vending machine that Coke ever sold sodas from is on display in one collection, all wearing the bright red and white Coke colors and logos.

Prior to the 1996 Centennial Olympic Games in Atlanta, Coke commissioned artists around the world to design folk art bottles for their own countries. The aluminum bottles depicting the foreign countries’ history and culture were produced in 8 ounce size, and the soda was sold during the Olympics. Coke is still giving complementary bottles of soda in these collectable bottles to visitors upon entering the center. They also have many of the 6-foot-tall folk art bottles on display.

Coke is big on following the pop culture of the time. Maybe that is one of their secrets in advertising. No matter what the pop culture is at the time, Coke is on top of it with advertising. They have commissioned paintings from famous artists around the world to produce works to use in their advertising campaigns. One such painting from 1931 showing Santa Claus with Cokes is still popular at Christmas today.  Another popular work from France in 1922 of a Polar Bear with Coke became a wintery TV advertisement starting in 1993. The Polar Bear character is now available in the center for kids of all ages to have a photo sitting on his lap.

Maybe the most exciting room in the center is the “Tasting Room,” where a hundred or so of the favorite Coke products from around the world are available in dispensers. That was a mad house of young school children tasting to their hearts’ content, but it was interesting.  Coke first introduced the Fanta Orange soda in Italy in 1955. It was a success, so beverages were developed for other regions such as  Africa, Asia, Europe, Latin America. Coke now has products in over 200 countries.

My personal favorite was a South African soda called “Bibo Candy Pine Nut.” It is a very sweet tasting pineapple and coconut flavor. I tried a German soda that I thought had a totally terrible taste. It was bubbly, but that was all I can say about it.

There is also the African soda “Sparletta Sparberry” (raspberry cream taste). A Greek soda is the Fanta Pineapple. A Peru beverage is the “IncaKola” which tastes like bubblegum. A Thailand favorite is “Fanta Melon Frosty.” From India we have “Thumps Up.” “Minute Maid Joy’ is popular in South Korea. All of the American flavors were available.

In the “Bottle Works” section, Coke has a small assembly bottling line in operation showing the process of bottling Coke in 8 ounce bottles with a robot machine loading the empty bottles onto the line. As you depart the center into the Coca Cola store where all sorts of Coke clothes, trays, keychains, etc. are sold, you are given a souvenir bottle of Coke made in the original secret formula like the formula in the vault.