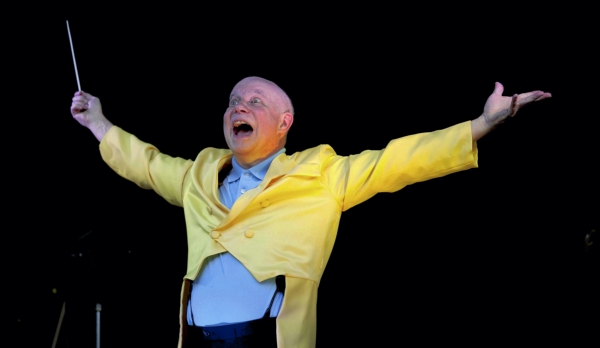 ‘Let’s Have Fun’ during June 4 concert Are you ready to have fun?

“Let’s Have Fun” is the theme of the 12th annual Pops at the Post concert this Saturday, June 4, beginning at sunset. And the program promises to be just that.

The theme encompasses a wide variety of music, according to Maestro David Hagy of the Salisbury Symphony.

The program will include its traditional offerings of the “1812 Overture,” as well as the “Washington Post March” — always renamed the “Salisbury Post March,” just for the evening — along with the “Stars and Stripes Forever.”

“It’s a running joke with the musicians that I never know which musicians will stand during the piccolo part,” Hagy says with a smile.

The evening will begin with John Williams’ arrangement of the “Star Spangled Banner.”

“It’s very, very different,” Hagy says. “I love the arrangements that return to the bridge part … ‘and the rockets’ red blare…’ John Williams’ piece calls for cannons, too, as does the ‘1812 Overture.’”

For the second encore, Hagy always chooses the Carmen Dragon arrangement of “America the Beautiful.”

The Pops concert is always a great time to show off a piece from the symphony’s current season, and the musicians will perform the third movement of Tchaikovsky’s “Sixth Symphony.”

“It has one of the loudest and most bombastic endings there is,” Hagy says. “It’s the true rock ending of the Romantic era.”

December marked the 100th birthday of the great Frank Sinatra. The symphony’s Sinatra-themed Big Band Bash was a huge success, and, following up that success, the symphony will present a Sinatra medley at the Pops concert.

Four out of the six Sinatra singers who entertained at the Big Band Bash are confirmed for Pops, Hagy adds.

You’ve heard of sing-alongs, but this year’s concert will have a rap-along — set to the theme from “Fresh Prince of Bel Air.”

“I don’t close my mind for something different,” Hagy says in planning each year’s concert.

Speaking of princes, the symphony will play a Prince medley arranged by John Stafford.

Prince, who died in April, was Stafford’s favorite musician in the ’80s, Hagy says. “He made all the suggestions for the medley.”

Presenting music that’s timely with current events is one reason Hagy doesn’t program the concert until April, he points out.

The symphony will also pay tribute to one of its own, cellist Anne Sellitti, who died of cancer on Easter Sunday.

Cellist Kevin Agner, a freshman at Gray Stone Day School, will be the featured performer in Elegy.

“He is a person who has professional music potential,” says Hagy of young Agner.

For a complete change of pace, the symphony will present “Pops Hoedown,” in which selections will include “Turkey in the Straw, “Chicken Reel,” “Pop! Goes the Weasel” and “Devil’s Dream.”

Continuing the TV theme show, the symphony will play the opening pieces from “The Flintstones” and “The Jetsons” — because after all, watching cartoons is another way to have fun.

Hagy hopes attendees will spend “just a good evening with the symphony, having fun.”

He adds, “I hope they’ll also consider coming to a concert as we begin our 50th season.”

Hagy, entering his 29th year as conductor, sat down, counted it up, and figured out he’s conducted two-thirds of the symphony’s concerts.

And he’s still having fun.