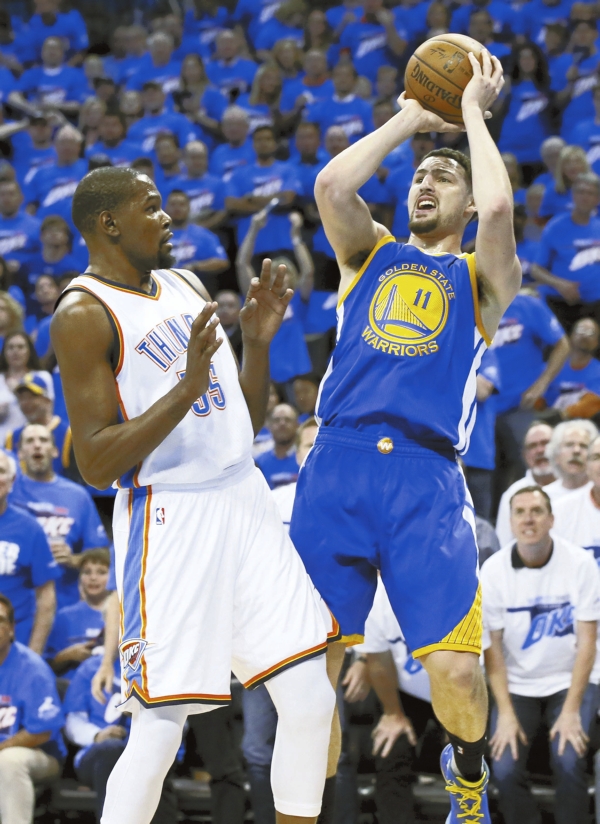 Not over yet: Warriors even series, host Game 7

OKLAHOMA CITY (AP) — Klay Thompson made a playoff-record 11 3-pointers and scored 41 points, and the defending champion Golden State Warriors forced a seventh game in the Western Conference finals with a 108-101 victory over the Oklahoma City Thunder on Saturday night.

Stephen Curry bounced back from a slow start to finish with 29 points, 10 rebounds and nine assists.

The Warriors, who set the league’s regular-season record with 73 wins, will host Game 7 on Monday. The winner will play Cleveland in the NBA Finals.

Oklahoma City dominated Games 3 and 4 at home, but the Warriors made 21 of 44 3-pointers on Saturday, while Oklahoma City was 3 of 23.

Kevin Durant scored 29 points and Russell Westbrook added 28 for the Thunder. But Durant made just 10 of 31 shots and Westbrook was 10 of 27.

Trying to become the 10th team to overcome a 3-1 deficit, the Warriors trailed much of the game and trailed by eight going to the fourth quarter.

Thompson kept them in it with four 3-pointers in just over seven minutes to start the period. Curry then hit two 3s, the second of which tied the game at 99 with 2:47 to play.

The Thunder, who blew a number of fourth-quarter leads during the regular season, fell apart in the final minutes after Golden State had finally gone ahead for good.

Westbrook lost control of the ball, and after Thompson missed a 3, Westbrook turned the ball over again. Curry’s layup with 14.3 seconds to play put the Warriors up by five, the Thunder turned it over again, and the Warriors were in the clear.

The Thunder led 23-20 after one quarter, then seized momentum early in the second. Steven Adams’ powerful one-handed dunk on Draymond Green drew a roar from the crowd and gave Oklahoma City a 37-28 lead. Green, who had hit Adams in the groin area twice during the series, was a constant target for the vocal Thunder fans.

Thompson opened the second half with back-to-back 3-pointers to give the Warriors a 54-53 edge, but the Thunder closed the quarter strong and led 83-75 heading into the fourth.

Warriors: Curry went 0 for 3 from the field and didn’t score in the first quarter. … Green committed three fouls in the first half and finished with five. … The Warriors made just 15 of 43 shots inside the 3-point line.

Thunder: Serge Ibaka had 12 points in the first half on 5-for-8 shooting, but he committed three fouls. … Durant shot 6 for 19 in the first half. … Ibaka scored 13 points and Andre Roberson added 11.