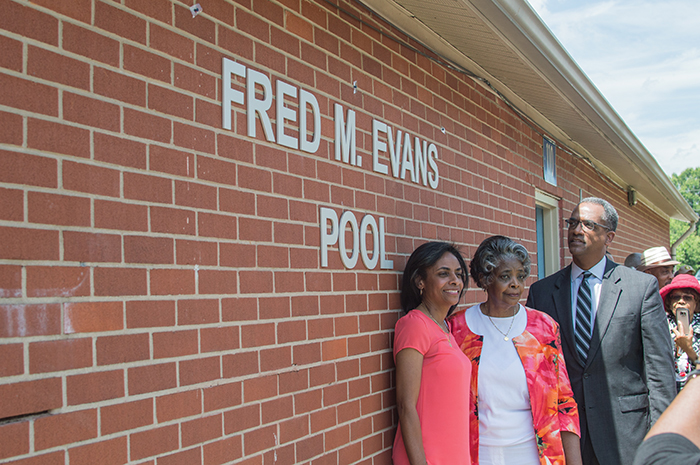 SALISBURY — Several dozen people on Saturday gathered at Lincoln Park to honor the late Fred M. Evans, but the pomp and circumstance means little unless his spirit lives on in Salisbury, said his son Fredrick Evans Jr.

The Evans family asked attendees to think of the renaming ceremony as celebratory rather than sad. At the end of a string of kind comments from others, however, Fredrick Evans injected a dose of reality into the ceremony.

“We’ve got to take the same spirit that he had and bring it out into the community,” Fredrick Evans said. “There is no Fred M. Evans out in the community … This all means nothing if we’re not prepared to continue his legacy.”

Some Salisbury children are “running wild” without a mentor, Fredrick Evans Jr. said. Artwork displayed in the City of Salisbury means little unless Salisbury residents have control of their town, he said.

“We’re only as strong as the weakest link,” he said.

If the number of people who turned out to say a few kind words about Fred M. Evans is any indication, he was an invaluable community figure. He served as a lifeguard at Lincoln Pool and taught countless people to swim. He was the first black assistant principal at the formerly all-white Boyden High School during integration. Former Salisbury High Principal Windsor Eagle said Fred M. Evans was instrumental in ensuring a smooth transition during integration.

In the community, Fred M. Evans was also involved in a number of community organizations. He died last year.

“He kept me out of prison,” the speaker said.

Another said: “Mr. Evans was just like a father.”

Speakers noted that Fred M. Evans didn’t hesitate to speak his mind, but he was also always willing to provide his counsel and a helping hand. Whether it was a story about learning to swim or a life lesson, everyone seemed to have a nice word to say about Evans. More than one person noted that there was never a fatality from drowning during Evans’ time overseeing the pool. His daughter Janine Evans remarked that she learned how to count change at the pool.

Cherry concluded his remarks by noting a quote from the well-known sportswriter Grantland Rice.

“For when the one great scorer comes to mark against your name, he writes — not that you won or lost — but how you played the game,” the quote goes.

In his life, Fred M. Evans showed that he had ethics, morals, leadership, friendship and love, Cherry said.

“To the Evans family, I want to thank you for taking me into your home so many times and feeding me and looking out for me,” Cherry said. “I will never forget all the kind things that Fred M. Evans and the Evans family … has done for me over the years. God bless all of you and thank you for coming out to honor this great man.”

Locals unhappy with company’s proposal to build near China…