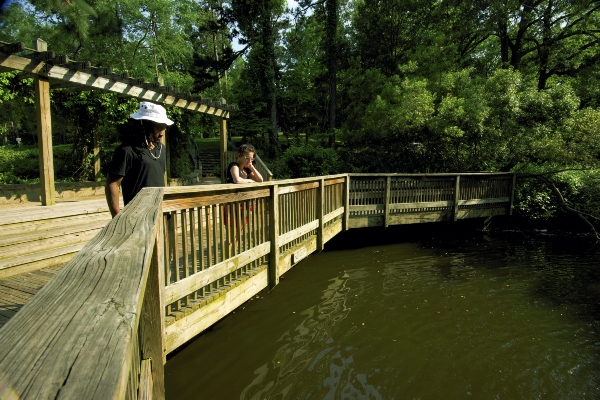 JON C. LAKEY / SALISBURY POST Jaquan Boyd and MaCyna Norcross pause to look at the pond at Hurley Park as they take a walk. The City of Salisbury maintains several parks that offer a wide arrange of activities.

SALISBURY — Jeanett Ngum brings her 3-year-old daughter Ellyana and her 3-month-old puppy Cheekeyto to City Park three or four times a week. As Ellyana screams and plays with her newfound friend Miranda Benton, from Richfield, tiny teacup Chihuahua Cheekeyto hops around and nips at the ankles of passersby.

“We’re regulars. Everyone knows us,” she said.

Jeanett is from Rhode Island and moved to Salisbury a year ago. She said the parks were not as nice where she previously lived.

“It’s a beautiful atmosphere for children to play,” she said, looking out at Ellyana from a shaded picnic table. And Ellyana gets plenty of exercise and interaction with other children.

The days are getting longer and the weather is warming up, which means more people will start to visit the city’s parks again.

There about 25 parks in the city of Salisbury, ranging from smaller ones like the one-tenth of an acre Magnolia Park that serves to add a small oasis to the brick and cement of downtown buildings, to larger ones like the 18-acre Town Creek Park that has a basketball court, play structure, four clay tennis courts, walking trails, picnic tables and exercise stations.

Between spending a couple of hours at one of the parks or participating in one of the Parks and Recreation Department’s summer programs, Salisbury’s parks and parks around the country have the potential to be great assets to a community.

Nick Aceves, Parks and Recreation Department director, said the locations of the parks are determined during the city’s master planning process. The master plan is typically updated every 10 to 12 years.

“Through the needs assessment it’s determined if and where parks are needed,” he said.

Aceves said that like all the Parks and Recreation professionals, he wants to add as much green space to the city as possible.

“That’s just the Parks and Rec profession, offering as much green space to people, or urban parks,” Aceves said.

There are about eight smaller parks concentrated in the downtown area. Most of them are less than an acre and have art pieces and greenery. The Bell Tower Park at 107 S. Jackson St., has a gazebo, benches and a small fountain.

The bigger parks near the downtown area are Cannon Park at 611 Park Ave. and Lincoln Park at 110 Old Concord Road. Cannon Park serves the Park Avenue neighborhood and has a play structure, bank-shot basketball game, picnic tables and a walking area. Visitors to Lincoln Park can enjoy a basketball court, play structure, picnic area with tables and grills and the only public swimming pool in the city.

Some of the city’s most visited parks are found north of downtown. According to Aceves, the most popular parks, in no particular order, are Salisbury Community Park at 935 Hurley School Rd., City Park at 316 Lake Drive, Hurley Park at 304 Annandale Avenue and Kelsey Scott Park at 1920 Old Wilkesboro Road.

There are also 4.2 miles of the Salisbury Greenway towards the north of the city, near places like Brenner Avenue, Grants Creek and Forest Hills.

Aceves said Salisbury is part of the N.C. benchmarking core services program and submits information about different services to the state. According to statistics from the program, different aspects of Salisbury’s parks are on average, above average and below average on certain measures.

The city’s Parks and Recreation Department does more than maintain the parks. There are more than 30 different summer programs offered through the department under categories including aquatics, athletics, camps, fitness and skills. There is youth basketball, swim lessons, a summer enrichment program, cheer camp, seamstress camp and pickleball.

Aceves said they will offer some new specialty camps this year and the department is planning some new programs for youth for the end of the summer.

There are also different events going on at the parks throughout the summer. Music at the Mural, a free outdoor concert series, will be going on in downtown Salisbury on the last Saturday of every month. Movies in the Park started on Friday at City Park and will continue throughout the summer with movies like “Aladdin,” “Home” and “The Good Dinosaur.”

One of the most obvious benefits of parks are the effects it can have on the health of a community. According to the Centers for Disease Control, parks and trails can increase physical activity. Being able to walk to the parks and greenways encourages people to not just exercise but exercise more often.

Chuck Flink is the president and owner of Greenways Incorporated, a consulting firm that helps local, regional, state and federal government agencies, non-profit organizations and other businesses with planning and designing greenways, open spaces and green infrastructure.

His company wrote a report for the Wolf River Greenway in Memphis, Tennessee, and found that building a connected trail system would promote biking and walking instead of driving.

The study found that 100,000 people would be within a 10-minute walk of the greenway.

“When you’re within a 10-minute walk of 100,000 people, you have the opportunity to change the way people transport themselves throughout their community and we believe that the greenway can be that,” he said.

Parks can also improve mental and environmental health and provide community members with a way to socialize.

“I kind of call greenways the new main street of America,” Flink said. “It’s kind of the place where you go to be seen and you go to interact with your neighbors and the people in your community because you’re not in a car, you’re walking, biking.”

John Wear, director of the Catawba Center for the Environment, said since greenways can weave through different parts of the community, they give more people access to green spaces.

“You’re really enabling more and more people to have that opportunity,” he said.

Parks can bring economic value to a community. For one thing, studies have shown that living closer to greenways and parks can increase property values.

Flink said according to the National Association of Home Builders, “the closer that you are to a park or a green space or a greenway, a trail, the higher the value of your property will be.” He said that increase can be anywhere from 10 to 20 percent in value.

Flink pointed to the investment Greenville, South Carolina, made in its greenway and how it changed the city for the better.

The mayor of Greenville replaced a highway bridge that brought traffic downtown and with a bicycle and pedestrian bridge along with a greenway and park. Flink said it connected with other trails and greenway systems throughout the city.

Though the move was an $8 to $10 million investment, Flink said after some studies the town found that the parks created about $100 million of economic return for the downtown area.

“It was a catalytic project that changed people’s perception of the downtown. It changed the lifestyle and activity in the downtown because it became this green attraction and this activity center,” Flink said.

Flink said once the area became a hub of activity, the restaurants and retail stores moved in.

“They credit their entire economic revitalization of their downtown to their investment to their park and greenway system,” he said.

Wear said business like the fact that their employees have the opportunity to access green spaces for exercise.

Aceves said he has heard of instances where businesses used a city’s parks as one of the determining factors of whether they wanted to move their business into an area.

“I know stories, and it could be anecdotal, of businesses going into towns and saying, ‘Show us your parks,’ before moving their large businesses,” he said.

While governments are improving parks, they have to be aware of the negative effects they may have on low-income areas.

Flink said cities have to safeguard low-income and historic areas with price controls or tax programs to help stop gentrification and protect people from being pushed out of their own neighborhoods.

“It has to be done with policy and it has to be done very deliberately because if you allow market forces to dictate everything, then these people are going to get priced out,” he said.

And some people believe parks and greenways attract criminal activity, according to the CDC.

But Flink said that attitude is changing. Flink has worked on the American Tobacco Trail in Durham and a study found that though crime occurred around the trail, the safest place to be in the neighborhoods was actually on the trails.

The future of Salisbury’s parks

Some are disheartened by what has become of Salisbury’s parks. Jerry Shelby, a spokesperson for the Morlan Park neighborhood, said he has been asking the city to put some cement down for a basketball play area at Morlan Park, one of the only parks east of I-85, to bring something into the area that the youth could do.

He was also concerned about the long distances children would have to travel with no sidewalks to get to the closest parks where they can play basketball.

“In our Morlan Park when I first moved here, it took four years to get baby swings put in there. It took seven years to get a park bench,” Shelby recalled.

To others, like Jeanett Ngum, Salisbury’s parks are a cut above parks in other cities.

Aceves said there are no concrete plans to add any new parks to the system; instead, the department is focusing on improving the city’s current parks and trails.

He said there is grant funding in place to extend the greenways from Catawba College to Kelsey Scott and he hopes the department will be able to move forward on the project in the near future.

“I think in the past, like in a lot of industries, a lot of people stuck with what they did … Now, I think recreation is all about trends,” he said.

Some of the current trends Aceves has heard other parks are doing are Segway tours on greenways and geocaching, which is like a digital scavenger hunt.

One thing the department is working on is providing free Wi-Fi at all of the parks.

Aceves said that ultimately, he wants to be able to serve the public with the parks and programs that the department offers because the experiences people have with those places can last a lifetime.

“A lot of people see Parks and Recreation as something that has molded their childhood,” he said. “It touches people in very different facets, whether it’s the runner on the greenway or the kid on the playground or the person taking guitar lessons.”

Community turns out at pool renaming to honor Fred…