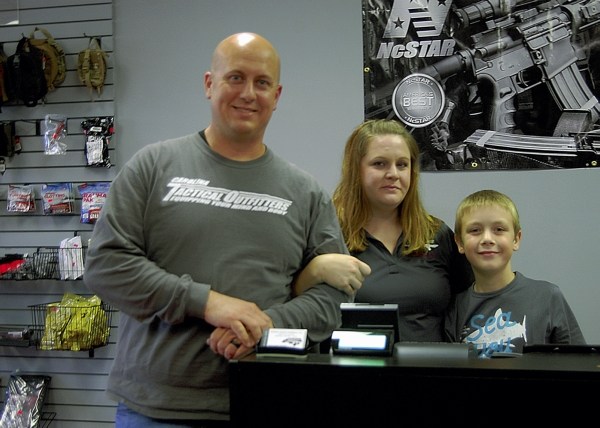 Amanda Raymond/Salisbury Post Aaron and Kara Thurston have opened Carolina Tactical Outfitters at 2162 Statesville Blvd. Their son Jacob helps out in the store, which sells tactical kits, shooting accessories and mission essentials, as well as offering training and consulting.

Carolina Tactical Outfitters branched out of Country Road Outfitters, which now offers outdoor products. The business started around 2009 and had its grand opening at its current location on May 21.

Aaron and Kara Thurston wanted to offer things that they saw a lack of in the community, including body armor, medical and survival supplies, equipment bags and airsoft equipment.

“We offer stuff that’s not available at the regular gun shop,” Aaron Thurston, founder of the business, said. He is an EMS captain and has been a paramedic for 16 years.

Aaron said he has a wide variety of clientele, from prepper groups to law enforcement and military.

Aaron and Kara have even helped a photographer who worked for an outdoor channel find bags to hold his camera equipment.

“We set up a custom photography rig to carry all his gear when he’s in the woods running with these hunters … to carry his batteries, extra mic stuff, I mean everything,” Aaron recalled.

“I’ll be the first person to tell you, I can’t tell you what all those pouches on the wall are really for but I can tell you 50 other ways to use them,” Kara, Aaron’s wife who manages personnel and finances for the store, said, laughing.

Carolina Tactical Outfitters does not offer firearms right now, but Aaron said they plan to offer them soon. With all of the other products they offer to the public, Aaron said he does not want the store to be known as a typical gun store.

“In the big picture, we’re going to be the gun store because it’s expected that we have guns,” he said.

Kara, also a paramedic, said Aaron participated in shooting competitions and ordered so many supplies that they could stock a small gun store. Aaron ordered the things that he needed, and also bought extra to create a display. Aaron started selling some of the items and as more and more people requested things, the more he gathered.

The family then took their products to gun shows where their son Jacob also helped out. He continues to help out in the new store.

“We started out with one table with a bunch of stuff laying on the table and we’ve evolved to two, three tables and sometimes four,” Kara said.

Aaron said they now have an “elaborate display” that they often get compliments on.

Once the Thurstons outgrew the space they had in their house, they decided it was time to move into a storefront business.

The Thurstons did not just want to sell products without offering the proper training. They offer tactical medical classes, concealed carry classes and introductory classes for hand guns, rifles and shotguns.

“Just to help make sure that everyone who owns a weapon is able to run it properly,” Kara said. They even encourage families to bring their children to the classes so they can learn about the safety concerns.

Kara said they can help assess the group’s current security team or help set up a team. She said they accept donations or do the work for free.

“It’s not something that we make any kind of profit on and whatever donations are made we either donate towards another cause or we use to develop that part of the business,” Kara said.

Aaron said they have done seminars and walk-throughs for at least 10 groups since August in both North Carolina and South Carolina.

Aaron said he has always wanted to provide the service to religious groups and sees it as a calling.

“The church should be a sanctuary and unfortunately, it’s become that you have to make it a sanctuary,” he said. “It’s not a place of peace like it used to be.”

“Some of them have stores or warehouses on their own but it gives us a community,” Kara said. “…It gives us a network. It doesn’t just give us one isolated place.”

Aaron said they plan to bring apparel, including tactical apparel but no uniforms, and also footwear and firearms into the store.

Beyond that, the Thurstons want to eventually have an indoor combat simulation training center where clients will be able to play out emergency situations with real guns using simunition, a paint projectile.

Individuals and religious groups will be able to play out home and building invasion scenarios and medical emergency situations.

“There’s nothing to compare it to that we can find that a civilian has access to,” Aaron said.

Kara said they work with a good group of people both inside of the store and out in the community. She and Aaron hope to continue to add to the store and develop the business to its fullest potential.

“We don’t want to say we’re shutting these doors in two years, but we hope to develop beyond here in two years,” Kara said.

Fun in the sun on High Rock Lake, boaters gear up for Memorial Day