Pops at the Post: Vendors bringing new tastes and favorites 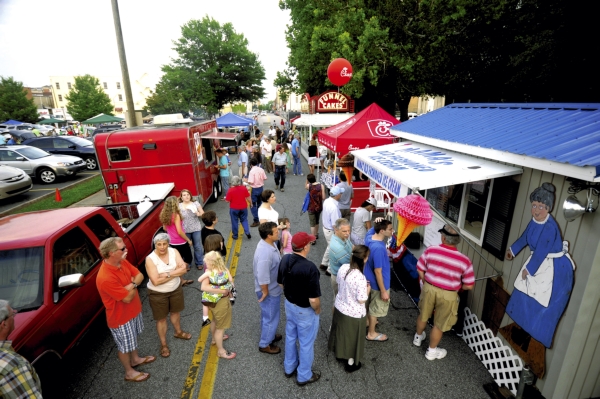 SALISBURY — A variety of food and drink vendors will be on location for this year’s Pops at the Post concert, offering everything from deep fried Oreos to barbeque sandwiches.

Returning again this year as a vendor, Andrew Dionne, owner of Kabob’s food truck will be serving gourmet shish kabob pita sandwiches. Selling for $9 each, the sandwich is comprised of grilled pita bread stuffed with rice and cucumber salad with a kabob on top.

“The concert has a great crowd of people, and I am a huge fan of symphonies,” Dionne said. He has owned and operated Kabob’s for three years.

First-time Pops vendor TnG barbeque will be on site offering chopped barbeque and barbeque chicken sandwiches, along with loaded baked potatoes. The sandwiches will be $4 and potatoes will be $6. TnG is a mobile catering company owned by Obie Faggart of China Grove.

Also a newcomer to Pops at the Post this year is Kaye’s, which is serving freshly pressed lemonade, funnel cakes, and deep fried Oreos. For a 16 ounce cup of lemonade, expect to pay $2, and $4 for a 32 ounce cup. Funnel cakes and Oreos are being sold for $5.

“I have lived in Salisbury practically all of my life, and I have owned this business for over 40 years. This year I decided to give Pops at the Post a try,” owner Robert Corriher said. The business is named after his wife, who is a co-owner of the business.

Having been a vendor at the concert for around five years now, Mr. Cone and owner Joe Bello are returning again this year with premium soft serve ice cream.

“I love the Pops at the Post event and the community. My family and I can enjoy the concert while I am working,” Bello said. Mr. Cone, a family business, was originally started in South Florida in 1989. It was brought to North Carolina in 2007.

Jason Slusser will be returning this year with his business, Dolce Italian Ice. Pops at the Post was his first event when he first started his business. Also returning is Som’s Meat on a Stick, which will once again be serving pork and chicken skewers with grilled corn on the cob. Meat on a Stick has attended the concert as a vendor every year since the beginning.

Once again this year, Cheerwine will be serving regular and diet Cheerwine from their trailer in the old First Bank parking lot near West Innes and Church streets.

“I am very excited to welcome our new sponsors to the event, and I am so thankful that our vendors want to come back year after year,” organizer Audrey Eudy said.

Unfortunately, crowd favorite Brian’s Grill will not be attending the event this year, due to a scheduling conflict. He promises to be at the event next year.