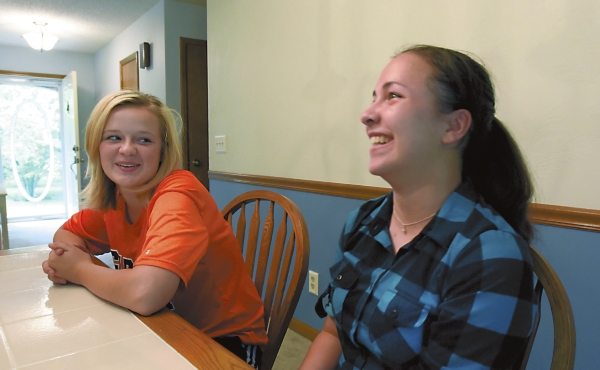 Fifteen-year-old Elora Suggs, left, and 17-year-old Franziska Botur, an exchange student from Germany, talk about their experiences. Botur has attended Carson High School this year with Elora while living with Alan and Wendy Suggs. Wayne Hinshaw/For the Salisbury Post

At just 17, Botur holds an impressive average of 18 seconds for solving a Rubik’s cube and plans on competing in the European Rubik’s Cube Championship from July 15-17 in Prague, Czech Republic.

Botur attended Carson this year as an exchange student from Berlin, Germany. She spent the school year living with Alan, Wendy and Elora Suggs.

“It’s perfect. I couldn’t have asked for a better family,” Botur said. “Since the first day, they were here for me.”

Alan, an Army National Guard Recruiter for Rowan County, said hosting an exchange student with his family is something he had been wanting to do for some time. He started out searching Google for an international high school student exchange program. One of the first programs he found was Ayusa International.

Back when Alan attended high school, he and his mother hosted an exchange student from Germany. According to Alan, half of his family is also of German descent.

“We love Germany here,” he said.

After discussing the idea more in depth with his wife, Wendy, and his daughter, Elora, they decided to try it.

“We applied, and a few days later somebody came out and inspected the house to make sure we had room for her. A couple days later, Elora and I sat down and picked her out and then a month later, she was here.” Alan said.

Botur said she found out about the program through her best friend, who took an interest in it.

“She kinda talked me into it, and then I looked it up and I was like yeah, that looks interesting. And so I looked around and told my parents about it and it happened,” Botur said.

Botur applied to the program, and although she did not receive any scholarship money, her parents showed their support. Botur’s mother sold her own car to help cover some of the expense.

“I got a letter one day from my host family and some information about them, and then I emailed them and we talked a little bit and I came here,” Botur said.

“It was exciting,” she said. “I can remember the moment when I came down the escalator, and I was super excited, and kind of scared, too, just because everything is new and you don’t know anybody here.”

Since Botur’s arrival, she and 15-year-old Elora have become almost like sisters. With Botur coming from another country and Elora being a freshman, they both experienced adjusting to a new school together and even joined Carson’s soccer team.

“It’s nice to have something different,” Botur said. “I think it’s not about the place where you go to, it’s about the people.”

In their free time, Botur and her host family play card games like Uno, and they travel. They’ve traveled to D.C., Boone, Maine, Vermont and Boston to broaden Botur’s experience in the U.S.

“It was a perfect fit. We couldn’t have asked for a more perfect fit,” Alan said.

Ayusa International is accepting applications through June 30 for host families throughout North Carolina for the 2016-2017 school year.

Host families work with an Ayusa representative throughout the year to provide exchange students with three meals a day and a bedroom. Ayusa’s exchange students come from more than 60 countries and are 15 to 18 years old. Students are fully insured, bring their own spending money, and are proficient in English.

“It’s been a fantastic organization. Everything is very streamlined,” Alan said. “I would definitely recommend it. It’s a matter of just pulling the trigger.”

“It’s also good for people who have kids because they learn things about another country and then they make close friends,” Elora said.

Reflecting on the past school year, Botur said her decision was worth it and has been a great experience for her.

“You learn so much, and all the memories and everything, it’s totally worth it.” she said.

It’s worth it for host families, too.

“It’s a five minute application they fill out. And then the ball starts rolling and then they have one of the most meaningful experiences of their life.” Alan said.