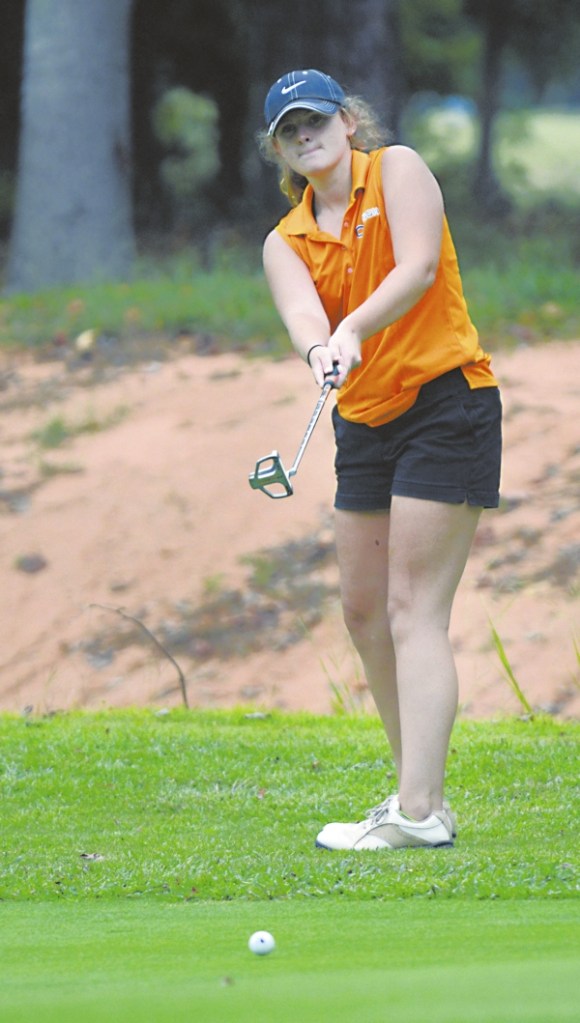 CHINA GROVE — Mostly a softball player growing up, Adison Collins tried serious golf for the first time as an eighth-grader at Southeast Middle School.
“My whole family plays golf, including grandparents, and I really wanted to try it,” Collins said. “I remember that first time I played was at Corbin Hills on a coed team, and I surprised myself. I found out I had some natural ability for golf. I had the power.”
Collins has made progress steadily. She’s been on the All-Rowan County team the last three seasons, she’s been on All-South Piedmont Conference teams, and she qualified to play in the 3A State Championships as a senior.
Collins signed recently with the Montreat Cavaliers, which makes her a pioneer for Carson’s girls program.
Montreat competes in NAIA. The school is located in a scenic area in the Blue Ridge Mountains, 15 miles east of Asheville.
“I love the mountains and I love the Asheville area,” Collins said. “I’m an outdoors kind of person, so it fits me.”
Collins shot 93 to tie for fourth in last fall’s Rowan County Championships at Warrior.
She shot 40 in a nine-hole SPC match at McCanless as a senior and had a 42 at Warrior.
“I’ve shot a 38 in a practice round — that’s my best score for nine holes, and I played the best 18 holes I’ve ever played in the Labor Day Tournament at the Country Club last year,” Collins said. “But golf is such a mental game. I’m a go-with-the-flow kind of person most of the time, but then I’ll hit a bad shot and freak out for a little bit.”
Most golfers can relate to that.
Carson coach Ryan Chandler sees a bright future for Collins. He’s watched her take steady steps forward with her mental focus as well as her physical game.
“She’s dedicated to golf and she really wants to do well every time she plays — and that’s important,” Chandler said. “She can hit the ball well off the tee, and her scores are going to drop in college as she tightens up her short game. Adison has a very athletic swing. That’s going to give her college coach (John Sullivan) something he can work with.”
Collins plays most of her offseason golf at Corbin Hills. She credits former Corbin Hills pro Jay Hill as being one of the people who’s helped her get to where she is now.
Collins plans to major in psychology at Montreat.